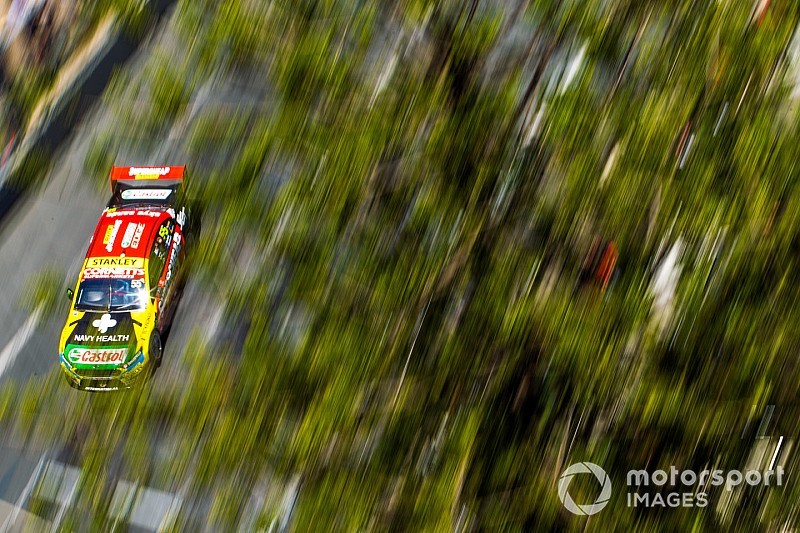 Tickford Racing has detailed the extraordinary contingency plan it devised should James Moffat had been banned from racing on the Gold Coast after his paddock scuffle on Saturday.

Moffat – on double duties between Carrera Cup and Supercars this weekend – was involved in a post-race altercation with fellow Porsche driver Glen Wood on Saturday, a stewards enquiry plunging his involvement in the remainder of the race meeting into doubt.

That opened the door for a headache at Tickford Racing, which has Moffat partnered with Chaz Mostert for the Gold Coast 600.

The stewards hearing was ultimately adjourned before yesterday's opening Supercars race, clearing the way for Moffat and Mostert to clinch victory.

The hearing was then resumed this morning, Moffat banned from the remaining Porsche race but given the green light to race the Supercar.

Had that not been the case, however, Tickford was organised.

Shortly after hearing the news about Moffat's paddock scuffle, the team sent Super2 regular Shae Davies back to his Main Beach apartment to collect his racing gear.

Had Moffat been banned, Steve Owen would have been moved from Richie Stanaway's car to Mostert's, while Davies would have then partnered Stanaway.

"It was going to involve some shifting around," confirmed Tickford boss Tim Edwards.

"I was thinking Steve Owen has worked with Chaz in the past, so they know how they fit in the car, etcetera. It made sense to maybe move Steve into that car and put someone else with Richie."

How it all happened

Within moments of the Porsche paddock scuffle happening, rumours of a ban spread like wildfire through the Supercars paddock.

The news quickly reached Edwards, who admits he was concerned about the severity of a potential ban working off his second-hand information.

"You instantly think that if it was true and he did actually get his licence suspended on the spot, we could be without a driver for the race," Edwards explained.

"You instantly think about who you could put in. You look at the Carrera Cup grid, what Super2 drivers might live in South-East Queensland, etc.

"You’ve got to think that they’d have to have a superlicence to start with and so you pretty quickly come up with a short-list of people who could do it.

"Phone calls started to happen, because we needed to, and then it’d be a process of seeing the stewards and trying to get approval, no doubt starting from the rear of the grid. We absolutely had to start thinking about it."

Davies emerged as the obvious candidate, given he lives just outside the circuit perimeter and races an ex-Tickford Ford in the second-tier Super2 series.

"That’s his apartment block over there. Fortunately he wasn’t already five beers in, which would have scuppered him pretty quickly," joked Edwards.

"The good thing with Shae is he drives the exact same car, pretty much, in Super2."

Davies was sent to home to collect is gear, however before he could return Carrera Cup announced that the hearing had been adjourned and Moffat was in the clear, at least for Saturday's race.

Even before that Edwards had spoken to Moffat, who eased fears of a ban by playing down the incident.

"I was out of control when I found out about it," he said. "I was slightly calmer after I’d spoken to Moff and realised it was just a misunderstanding.

"There might have been pitlane rumour going around, but the person involved knew nothing about it. He was standing here eating an ice cream watching a [Top 10] Shootout."

Having been cleared for Saturday, the next hurdle was Sunday's race. In the end, it wasn't until the stewards delivered the verdict that a Supercars ban could be discounted.

"I was quietly confident he would be racing today, but you don’t know," said Edwards.

"I can’t put the thoughts into the stewards’ minds, but from what I understood about the incident, I didn’t think it’d be that severe that it’d stop him racing for us.

"But until he walked out of the stewards’ hearing... he sent me the text this morning, so I knew straight away whether we had to enact a contingency or not."