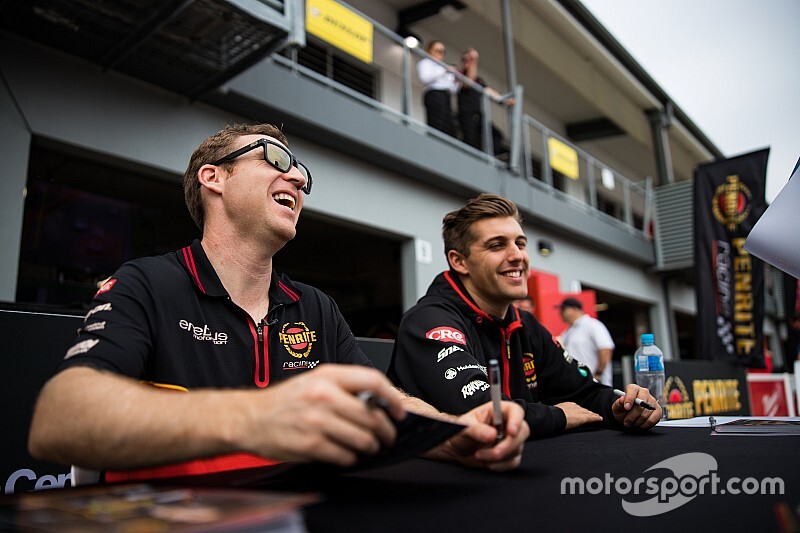 A rivalry may have dominated the headlines in Townsville last year, but as revealed in the latest episode of Supercars' Inside Line docuseries, there was some love in the air too.

The annual trek to Far North Queensland in 2019 came at the height of the parity debate regarding Ford's new Mustang.

Being the most outspoken of the Holden drivers regarding the Mustang's aero, weeks of comments from Reynolds had irked runaway points leader Scott McLaughlin.

There was a simmering tension between the two, amplified by both drivers having recently launched new podcasts.

The Podcast Wars, as it was known at the time, then went nuclear when Reynolds and McLaughlin clashed at the start of Sunday's race, resulting in the full-blown garage argument and all.

But while it was fire and fury that dominated the headlines, there was a lesser known love story – kinda – bubbling beneath the surface.

The fourth episode of the Inside Line documentary featured a light-hearted storyline about Anton De Pasquale and popular dating app Tinder.

It all starts at a signing session, where a young fan spills the beans.

"I found out you were talking to my sister on Tinder yesterday," he tells Anton.

The news sends Dave into a fit of laughter. "That's so good. Yes. No s**t? That's the best story I've ever heard in my life. That's made my day."

"I haven't been on Tinder for weeks," counters De Pasquale.

"Anton talking to [the fan's] sister was the funniest thing that's probably ever happened to me at a signing session," he says.

"We always give him s**t about it and he denies it, says he's not on [Tinder]. And he's still denying it."

The story continues at a fan event held later that night in pitlane at the Townsville street circuit. "We should go and find Anton's Tinder date," says Dave. "Let's go scope around."

After roaming around yelling out "Nikita", Dave unexpectedly gets a response – which sends him into even more a spin.

Nikita ultimately admits that the relationship is over before it's even started: "He unmatched me on Tinder."

Dave still manages to get her to write her number on a signing card, before bumbling through an awkward explanation to partner Tahan as to why he's been chatting someone up.

Inside Line continues on Tuesday with a trip to Queensland Raceway.