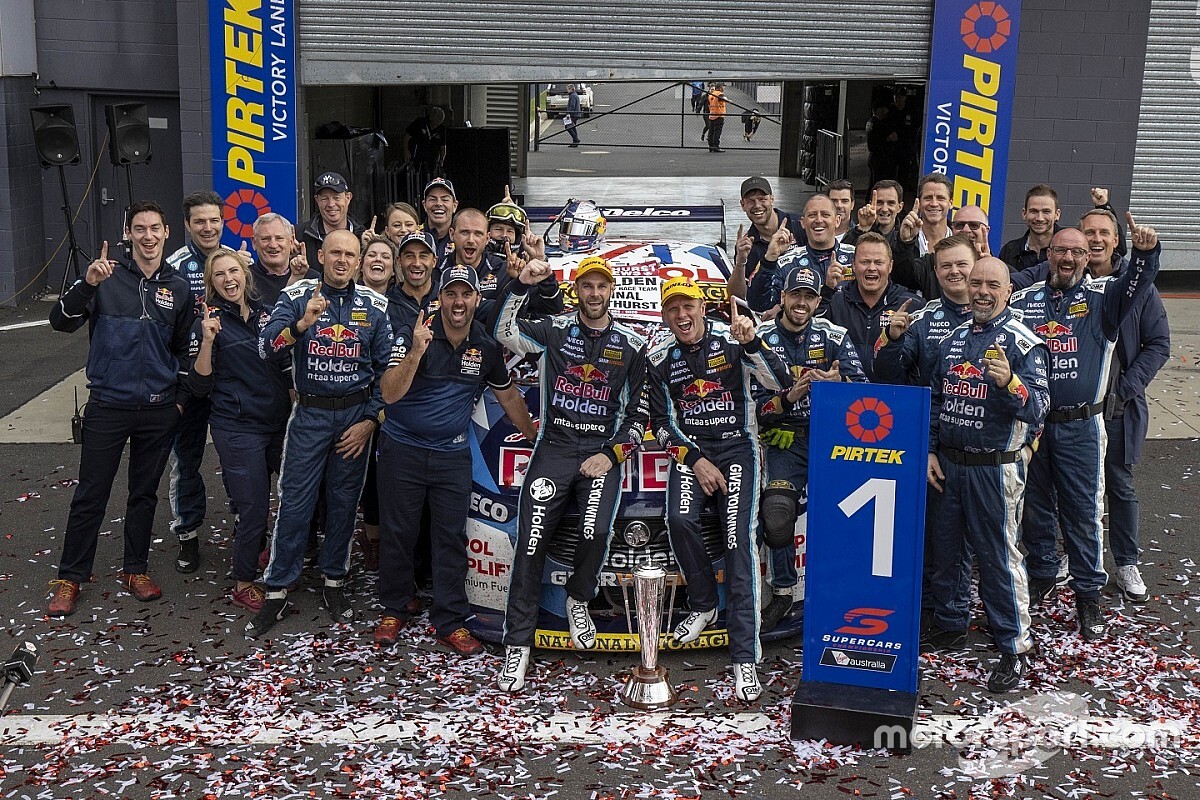 Today's Bathurst race was a farewell of sorts for Holden, the brand set to be shut down by General Motors at the end of this year.

That means while there will still be Commodores on the Supercars grid next season, there will no factory team, ending a long-standing tradition in Australian touring car racing.

The factory era was brought to a fitting close at Mount Panorama today, van Gisbergen and Tander combining for a famous Great Race victory.

And the occasion wasn't lost on either of the drivers, van Gisbergen reflecting on when he joined the Holden fold in 2013 after his controversial split with Stone Brothers Racing/Erebus Motorsport.

"I had some troubles, joined Holden, and I just remember [then-motorsport boss] Simon [McNamara] and [media manager] Gerald [McDornan] and the team, and all the Holden  guys, how welcoming they were," said van Gisbergen.

"It's been cool to be part of. And then becoming the factory team and having that weight on your shoulders, representing them like that, it's pretty special.

"To win here, the last one in a Holden, is pretty cool."

Van Gisbergen celebrated his win by stopping on Conrod Straight and grabbing a Holden flag off one of the few fans allowed inside the circuit, before proudly flying the flag out the window on his way back to parc ferme.

"I was thinking I'd pick up the chequered flag, and then I saw the guy there and I thought I'd stop and grab it," he said.

"Hopefully it looked cool with the flag out the top. Hopefully it was a good way to send [Holden] off."

For Tander, meanwhile, it was a fourth Bathurst triumph in a Holden, three of those coming in factory Holdens, two with the Walkinshaw-run Holden Racing Team and then this one with Triple Eight.

"I've been fortunate to have had a very strong relationship with Holden since 1998," he said. "It's been a real honour to drive their race cars for various teams.

"Bathurst means a lot to the Holden people. One of the fondest memories I have in my career is when we took the trophy into head office in 2011 with Nick [Percat], and how excited everyone was that we had Bathurst success.

"And even going over to Elizabeth to the manufacturing plant and doing the same thing there, seeing the line workers getting a photo with the trophy was very, very special.

"I feel incredibly honoured. It's a sad end to a fantastic brand. But I'm glad we were able to give a shed of light in these final moments. I'm really, really honoured to be part of it."

McLaughlin "completely satisfied" if Supercars career is over