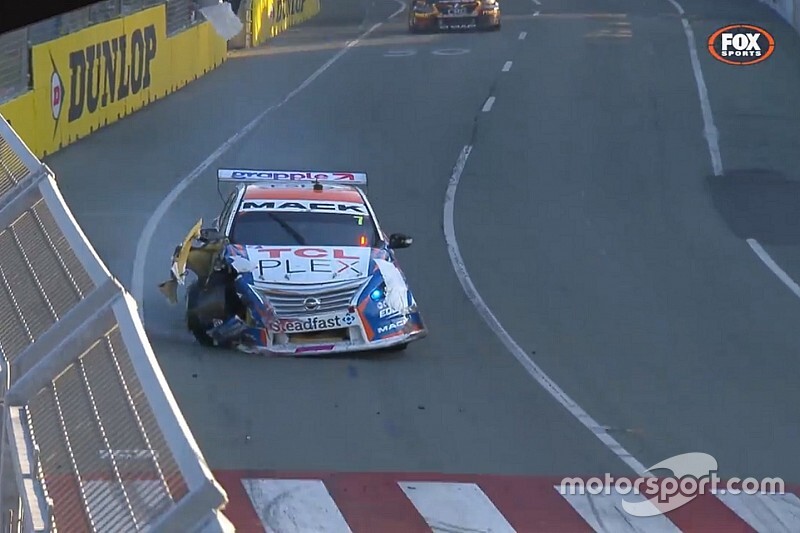 A frustrated Andre Heimgartner reckons he was "tipped into the fence" by James Courtney in the closing stages of today's Supercars race on the Gold Coast.

Courtney was on a late charge in the closing stages of race, having gambled on a late stop behind the Safety Car for fresh rubber.

That charge came to a spectacular halt five laps from the end when he clashed with Heimgartner on the way out of Turn 4, awkward contact firing the Kiwi's Nissan hard into the wall.

The Kiwi was left fuming with Courtney, adamant that the Walkinshaw driver had simply driven him into the fence.

“It’s pretty disappointing when you get tipped into the fence. That sort of driving standard is pretty bad,” he said.

“I couldn’t believe it when it happened. He hit me once and I thought he may back out of it and let me try and recover, but he just kept his foot in it and drove me straight into the fence after just smashing into the back of me coming out of that last corner.

“From what the guys are telling me it was pretty standard how he was driving in that last stint, just punting people out of the way.

“[The] disappointing thing is he probably would have got past eventually because he had better tyres, but he wasn’t patient enough to wait and just decided to fence me.”

Despite copping a drive-through penalty for the contact, Courtney reckons the crash was Heimgartner's fault.

He says he was squeezed by the Nissan, and, having established an overlap, had no obligation to get out of the throttle.

"The car had a lot more grip because I had fresh tyres," he said.

"I tried passing in the chicane, he was just blocking a little. Then I came out and got on the inside and had a run on him and he blocked me that side.

"Then I went the other side and he was still wheel-spinning, so I got sort of an overlap – and then he tried to squeeze me into the wall.

"If there's an overlap you don't have to back off, so he kept coming over and he started to spin, and then he was in the wall and I couldn't then get out of it, so I just kept into it.

"The rule is if there's an overlap you've got to give the guy room, and obviously there was no room.

"He would't have gone right if there was no overlap. The reason he want right was because there was an overlap.

"Anyway... it's frustrating because we could have got a few more spots. But it is what it is."

Van Gisbergen was told not to pass Whincup