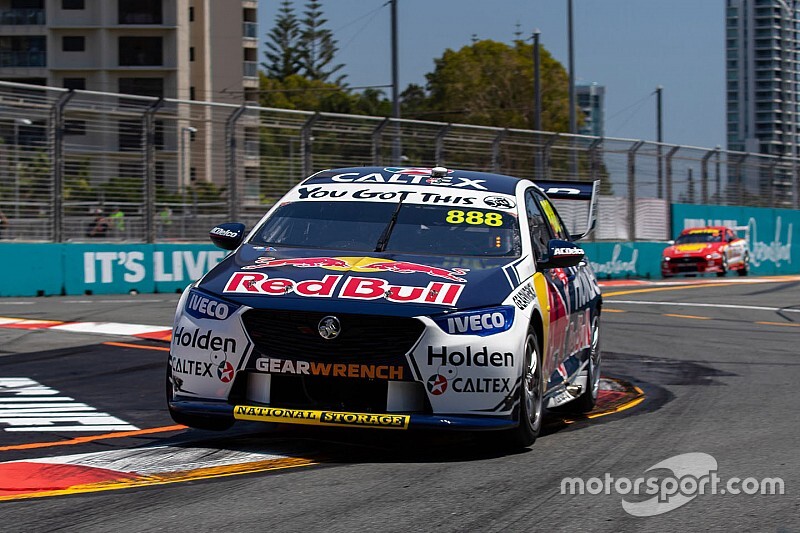 Running different strategies, Whincup and van Gisbergen wound up separated by just 0.5s after 102 laps of racing on the streets of Surfers Paradise.

It was Triple Eight's first one-two since last year's Sandown 500, Scott McLaughlin and Alex Premat the best of the rest in third place.

With the overwhelming majority of teams starting their co-drivers, it was Premat and Lowndes that did battle into Turn 1.

It was the seven-time Bathurst winner that won out at the start, Premat slotting into a Red Bull Holden sandwich behind Lowndes and ahead of Tander.

Initially the Frenchman was able to hold on to Lowndes, the gap hanging around the 1.5s mark for the first 15 laps.

However the gap did eventually begin to grow, blowing out to almost 6s after Premat was warned about his kerb use by officials.

As soon as the 34-lap co-driver minimum was reached Lowndes and Premat both pitted, Whincup emerging with an almost identical gap over McLaughlin.

Not wanting to double stack Tander kept going for another three laps, van Gisbergen forced to weather a brief storm from Cam Waters, who had taken over from Michael Caruso, before settling into third place after the stop.

The gap between Whincup and McLaughlin hung around 7s throughout the second stint, McLaughlin first to blink with a second stop on Lap 61.

Whincup followed suit a lap later, and, despite McLaughlin running wide at Turn 4 on his out-lap, the gap shrunk to 3s in the process.

Van Gisbergen ran significantly deeper in the second stint, only making his second stop on Lap 76.

He popped out 8s behind Whincup and McLaughlin, but with a tyre advantage up his sleeve in case of a late Safety Car.

Van Gisbergen quickly put that better rubber to work, slashing the gap to McLaughlin before breezing into second place on Lap 88.

It proved to be a timely pass, Garry Jacobson's Nissan shedding its muffler just seconds later to trigger the first Safety Car of the race.

While that could have opened the door for van Gisbergen to attack his teammate after the restart, the two Red Bull Holdens played the conservative game for the 10-lap run to the flag.

"CL did an amazing job to get us the lead of the race and a nice buffer,” said Whincup.

“I thought we were in a little bit of trouble there with that late Safety Car, but the car was good, we had pace, I couldn’t be happier.”

McLaughlin had no answer to the Red Bulls after the restart, his attention focused on Waters in his mirrors.

The runaway points leader was ultimately able to hold off the Monster Mustang for third, the gap to the factory Holdens a little over 2s at the finish.

The battle for eighth place was particularly heated at the finish, Andre Heimgartner's Nissan hitting the fence hard after contact from James Courtney coming out of Turn 4 with a couple of laps to go.

With Heimgartner's car badly damaged and Courtney hit with a drive-through for his efforts, Tim Slade/Ash Walsh could swoop in and grab eighth place.