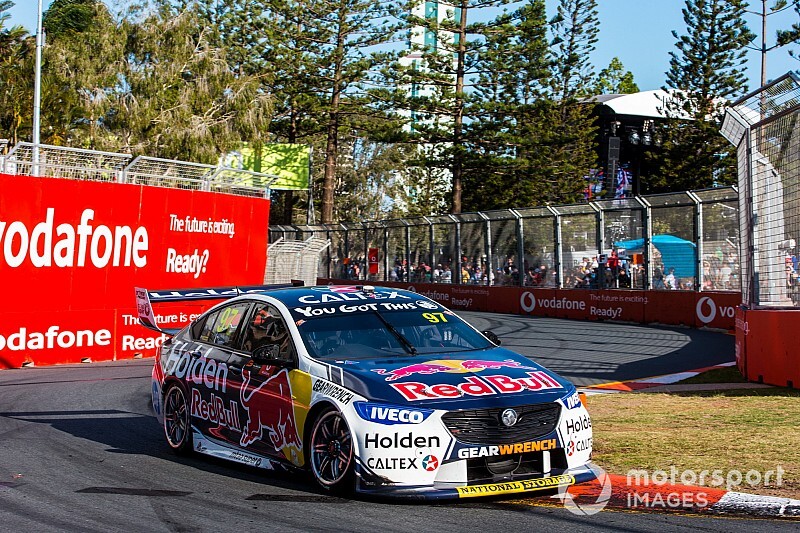 Shane van Gisbergen and Garth Tander led home a second Triple Eight one-two in as many days at Surfers Paradise.

For the Red Bull Holdens the race was almost a carbon copy of Saturday's opening leg, but with the positions reversed. This time it was the #97 that led throughout the afternoon, while the #888 played rear gunner.

David Reynolds and Luke Youlden did their best to keep the factory squad honest, Reynolds within a second of van Gisbergen at the finish after a late charge.

Lowndes looked to get the better of the starts from the front row, nosing ahead of Tander on the run to the first chicane.

But when he couldn't actually pull clear, Lowndes elected to brake early and let the #97 take over the lead.

From there the two Red Bull Holdens were untroubled across the first stint, running a second apart while Youlden dropped back as far as 15s in the Erebus entry.

Right on the Lap 34 co-driver minimum Tander pitted to hand over to van Gisbergen, Lowndes waiting four laps to do likewise for Whincup.

Running deeper into the first stint dropped the #888 around 4s behind the effective leader, while Reynolds, who took over form Youlden on Lap 34, found himself just 1s behind Whincup as the stops all shook out.

Michael Caruso actually led a big portion of the middle stint, having gone off-piste with strategy through a Lap 22 first stop.

It wasn't until Lap 51 that van Gisbergen got past the Monster Mustang, Whincup and Reynolds not getting through until Lap 58 and 59 respectively.

That left Whincup on the B-strategy used by the #97 on Saturday, the #888 not making its second stop until Lap 75.

The undercut wasn't as strong as yesterday, however, Whincup popping out right behind van Gisbergen and with much better rubber.

The intention to avoid an intra-team battle was made immediately clear, van Gisbergen told there shouldn't be any threat from behind.

Reynolds did his best to make sure that wasn't strictly true, shadowing the Red Bulls throughout the final stint.

He really turned up the wick in the closing stages, threatening to mount a very real challenge for the lead.

However he couldn't quite get it done, finishing third in a top three covered by just eight-tenths at the finish.

“It was harder [today]. We had the short tyre strategy and had to run them long at the end," said van Gisbergen.

“I was struggling a little bit trying to manage, then Dave put the pressure on and we had to speed up again.

“What an awesome weekend. Two one-twos for the Red Bull Holden Racing Team, it’s really special to be a part of it.

“Yesterday paid back today, it’s all about the team.”

A solid afternoon's work left Scott Pye and Warren Luff in fourth, as Waters climbed back to fifth after that alternate strategy left him at the back of the Top 10 for the final stint.

There were two more Tickford Mustangs next in line, Lee Holdsworth/Thomas Randle just head of Will Davison/Alex Davison, followed by Anton De Pasquale/Will Brown, which recovered well after being caught up in Lap 1 dramas.

James Courtney/Jack Perkins had to blaze a recovery trail too, finishing ninth despite an unnecessary stop for a faulty door latch.

It was a rollercoaster of a race for Fabian Coulthard, who opted to start against a field of mostly co-drivers from 16th on the grid.

He made swift progress, dodging a Lap 1 pile-up at Turn 11 to move straight into ninth place.

However his race swiftly unravelled when a faulty lambda sensor meant he needed to stop on Lap 22, the engine needing to be shut down and connected to a computer.

Not only was the stop itself incredibly lengthy, but when re-firing the car the back wheels were sent into a spin – which resulted in an additional 15s time penalty.

He and Tony D'Alberto still managed to climb back to 11th behind Nick Percat/Tim Blanchard.

With Scott McLaughlin missing today's race, his championship lead has been cut to a still-handsome 463, with 600 left to score across the final two rounds.

McLaughlin given all-clear after MRI