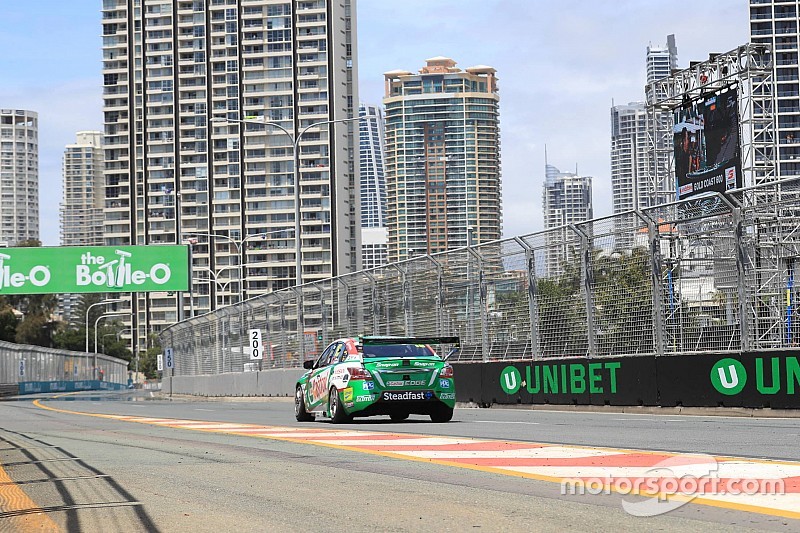 Rick Kelly topped the opening practice on the streets of the Gold Coast, as James Golding caused the session to be cut slightly short thanks to a nasty shunt at the beach chicane.

The Nissan driver was sitting top when the session was stopped 30 seconds from the end, after Golding went into both the right and left hand side walls after misjudging the long chicane at the back of the circuit.

With so little time on the clock officials elected to not restart the session.

It was Jamie Whincup that set the early pace, dipping into the 11s with a 1m11.785s inside the first 10 minutes.

At the quarter hour mark he was briefly shuffled down the order as first Shane van Gisbergen and then David Reynolds improved, Whincup hitting back immediately with a 1m11.680s.

Scott McLaughlin and Scott Pye were next to enjoy stints on top, the Penske driver briefly quickest with a 1m11.505s before being topped by Pye's 1m11. 441s.

The next change at the top came with five minutes to go, Rick Kelly landing what proved to be the hammer blow with an unbeatable 1m11.324s – despite claiming to have been held up by Alex Premat in the final sector.

"We had a bit of a quicker car there, but McLaughlin's teammate was, I don't know, warming up or whatever and got in the way a little bit in that last sector," said Kelly. "It cost us a little bit.

"But it's challenging out there. Everyone is scraping walls to do the time, and that's what this place is about. I guess that's why the drivers enjoy it so much.

Kelly's was spared any last-lap heroics that could have toppled his time by Golding's heavy shunt with 30 seconds to go.

The GRM driver bounced over the final part of the beach chicane and pinballed off both sides of the wall, creating a race against time for the team to get the car back on track for the remaining practice sessions.

"[With] the concrete walls around here there's not much room for error," said GRM director Barry Rogers.

"The boys will get hard at it and we'll see what goes from there. [The team] will get straight into it. Head down, bum up, and away we go."

Craig Lowndes finished the session second fastest thanks to a late improvement, while Pye's time from midway through left him third.

Nick Percat was another late improver on his way to fourth, while Whincup and McLaughlin were fifth and sixth respectively.