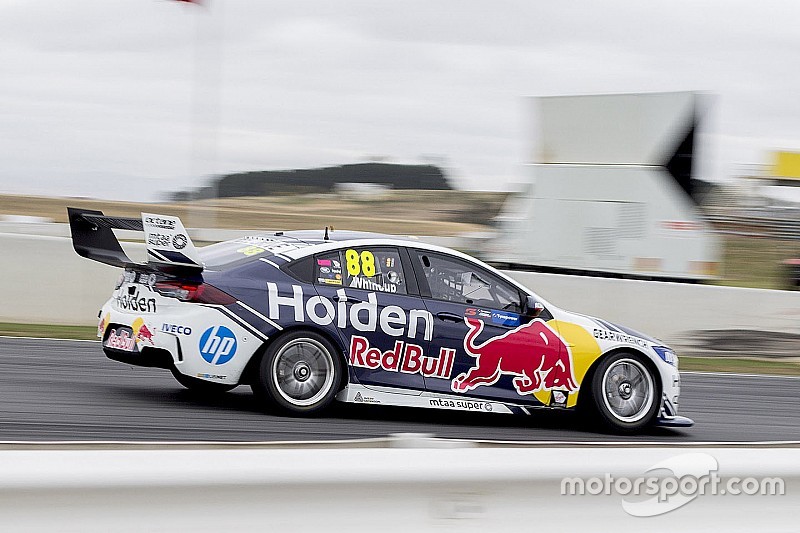 Triple Eight suspects it was a gearshift issue, not an engine problem, that left Jamie Whincup unhappy with his straightline speed at the Symmons Plains Supercars round.

The seven-time champion referenced problems with pace down the Tasmanian circuit's long back straight after qualifying 13th for Sunday's race, hinting that he may have carried an engine issue throughout the weekend.

However his T8 crew is adamant the issue is related to electronics surrounding the gearshift, perhaps caused by the new-for-2019 control ECU, rather than a lack of horsepower.

"We weren't as happy with our gearshifts as we'd like to be, which is ultra frustrating as that should be a given, something that at the level you're at, isn't a topic.

"But it was, it was costing us time.

"Generally in these instances you'd think it's more on the electronics side. There are changes in the ECU package from last year to this year, so we need to go over it and make sure we're on top of everything.

"Engine side it felt fine, our mapping was really good, so, yeah, it's annoying."

Dutton added that a Friday night engine change for car #88 was strictly precautionary, the team opting for a lower milage unit as a reaction to Shane van Gisbergen's failure at Albert Park, rather than any specific feedback from Whincup.

"If anything Jamie reckons his Friday engine was stronger," said Dutton.

"It was just trying to minimum the risk. It was case of 'this engine has low milage, so let's put it in for this double header'.

"Because of the issue we had with Shane at the Grand Prix, it was a matter of keeping engine milage to a bare minimum."

Dutton said it would be crucial to get on top of the issue before this weekend's Phillip Island round, given that it was both costly in terms of pace and engineering resource during limited practice time.

"With the practice sessions, there's only some much testing you can do within a session," he said.

"You try a few things, but then you've got to be ready to do the quick lap to prepare for quali. So we're not 100 per cent on top of that.

"It's as simple as that. That's how it's hurting us in two ways."

Whincup recovered to fifth in Sunday's race at Symmons Plains, however last place on Saturday thanks to a Lap 2 clash with Chaz Mostert saw him drop to third in the standings, 160 points behind leader Scott McLaughlin.