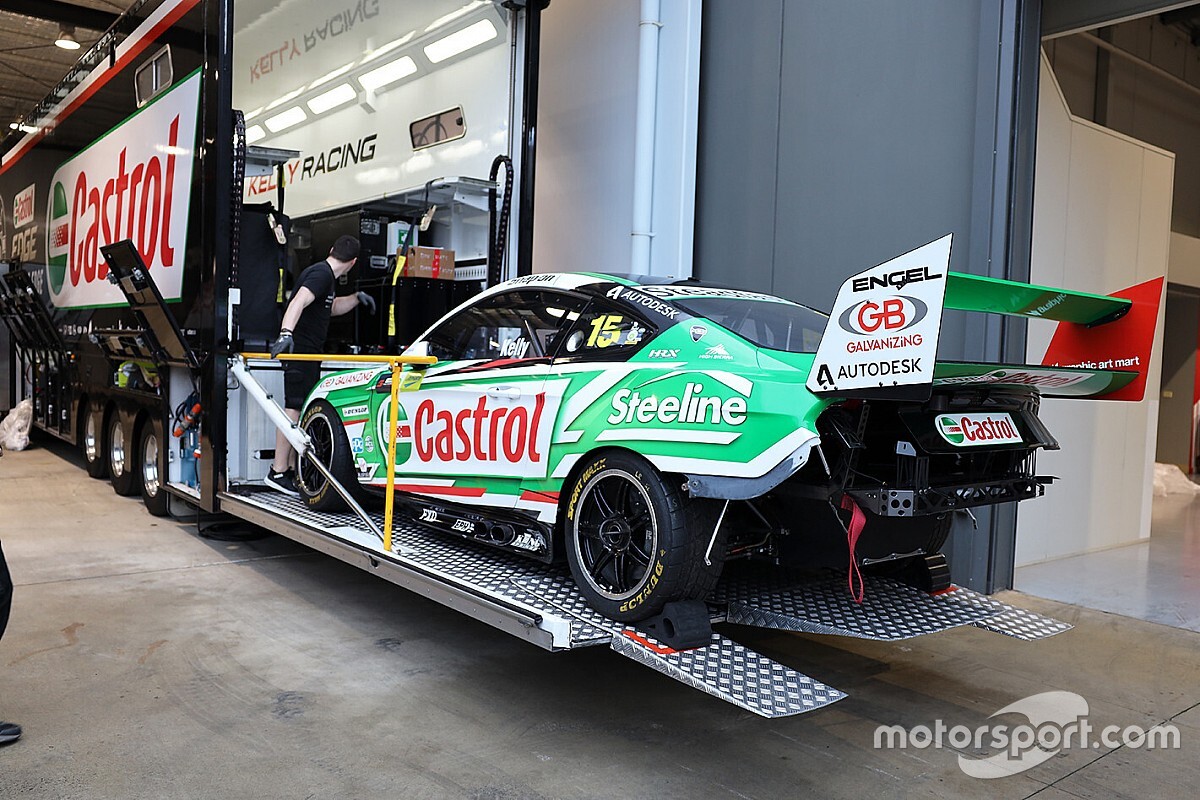 A ticking clock, a closing border, a deadly virus, families torn apart... Supercars' dramatic border dash had all the makings of a Hollywood blockbuster.

"I've never come across anything like that. Ever," says Todd Kelly as he reflects on Monday July 6.

"I honestly didn't expect that we'd need to react like we did. We weren't really prepared for it at all. We had things spread through the facility, the gearboxes and engines and everything were in their respective departments. So to get everything into the truck and over the border... we only just made it by half an hour."

Kelly has seen and done a bit in motorsport. He was a factory Holden driver for years. He won the Bathurst 1000 with Mark Skaife. He turned a Nissan Altima into a Supercar from scratch. He led a round-the-clock effort over Christmas to get two Mustangs finished in time for the 2020 season.

So when he says he's never seen anything like the desperate border dash, you know it was something special.

Rewind a few weeks and all was well in the world of Supercars. Australia had seemingly beaten off the worst of COVID-19, there was a new schedule in place and even talk of crowds being back for Winton.

As cases skyrocketed in Melbourne things became incredibly complicated for Supercars. Its response started with crowds being shut out of Winton (located two hours north of Melbourne). Then the Winton round was canned altogether, replaced by a return to Sydney Motorsport Park.

What followed was a totally unprecedented scenario; the first border closure between Victoria and New South Wales in 101 years.

There had been rumblings of a closure over the weekend of July 4-5. The AFL, already working out if interstate hubs, preempted the closure and got its Melbourne teams out of town by the Sunday.

When the official announcement was made mid-Morning on the Monday, the date for the closure was 11:59pm on the Tuesday – a day and a half away. However, the fine print swiftly revealed that the Tuesday deadline was for Victoria. Those in the Greater Melbourne area only had until 11:59pm Monday to get into New South Wales. 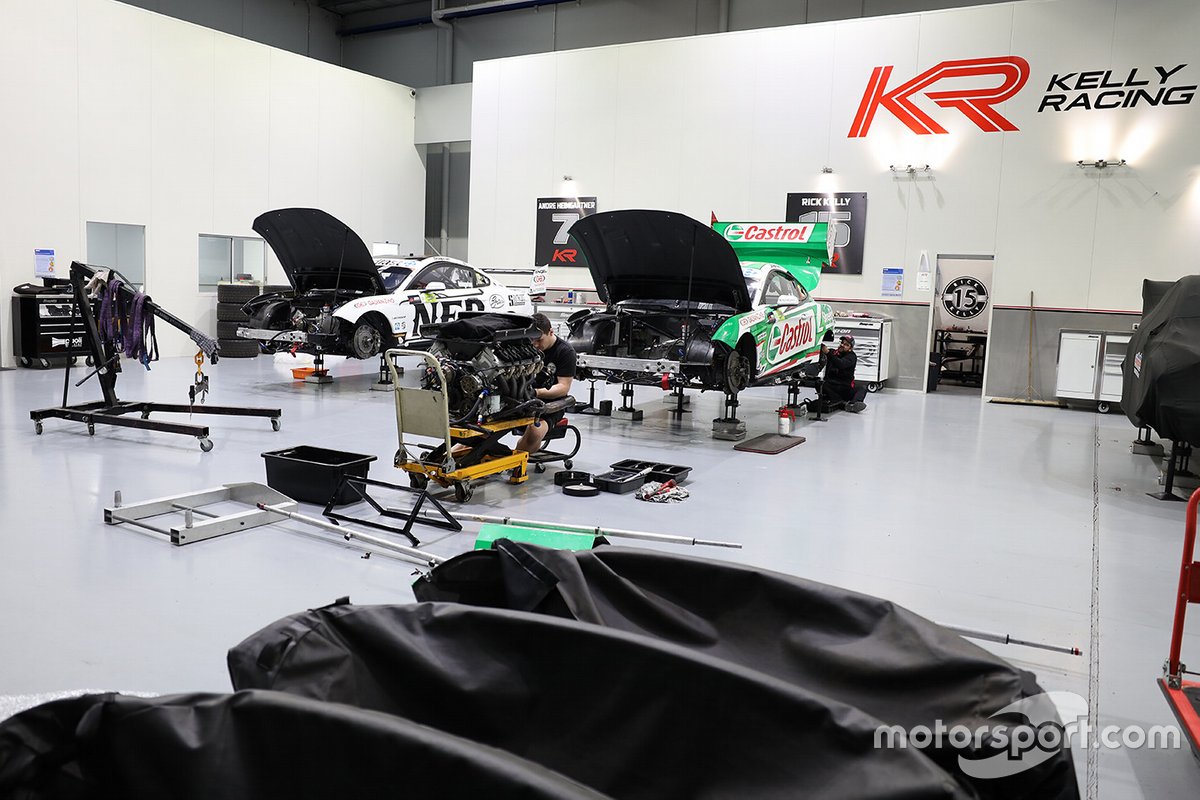 The five teams were thrust into action from a range of levels of preparedness. Kelly Racing didn't have engines or gearboxes in their cars, for example. Walkinshaw Andretti United, knowing something like this was possible, was a little more prepared.

"When you're living in Melbourne, you couldn't help see that the AFL players were all leaving on the weekend," says WAU team principal Bruce Stewart. "That's when I started thinking about it. There'd been some talk, but nothing too in-depth.

"I called [Supercars' Head of Motorsport] Adrian [Burgess] on the Monday morning and said 'I think I'm going to start planning to move the team up north to Albury'. He said 'yeah, that's probably a pretty good idea'.

"A couple of hours later he called me back and said 'you should really fast-track that planning, because it looks like that's what we need to do'.

"I'd done some thinking and I'd started canvassing some people. Thankfully our cars were in reasonably good nick and the engines were in the cars, so we were quite nimble."

Being nimble is one thing, asking drivers and staff if they are willing to leave within hours, without knowing when they'll be back, is another.

Teams quite literally had to find out who was willing and able to say goodbye to loved ones – or not say goodbye in some cases, if partners and children were at work or in care – for weeks at a minimum, and more likely months.

"There were obviously reservations and concerns because the information we had at the time was limited," says Kelly.

"I said 'we've got to get out of here, we need everyone on board to pull this one off'. There were people in supermarkets doing their shopping, there were people babysitting their children... I was a little concerned that I'd roll up with the coach and there'd be two people there waiting to get on.

"But amazingly every single person we had at the last Sydney Motorsport Park round has jumped back on board... actually we have one extra in [commercial boss] Lauren [Batchelor].

"That's outstanding. I think we're the only team that managed to do that. But now it's a matter of how we manage it from here, because a lot of the crew have got young families and wives back home. It's going to be a hard challenge..." 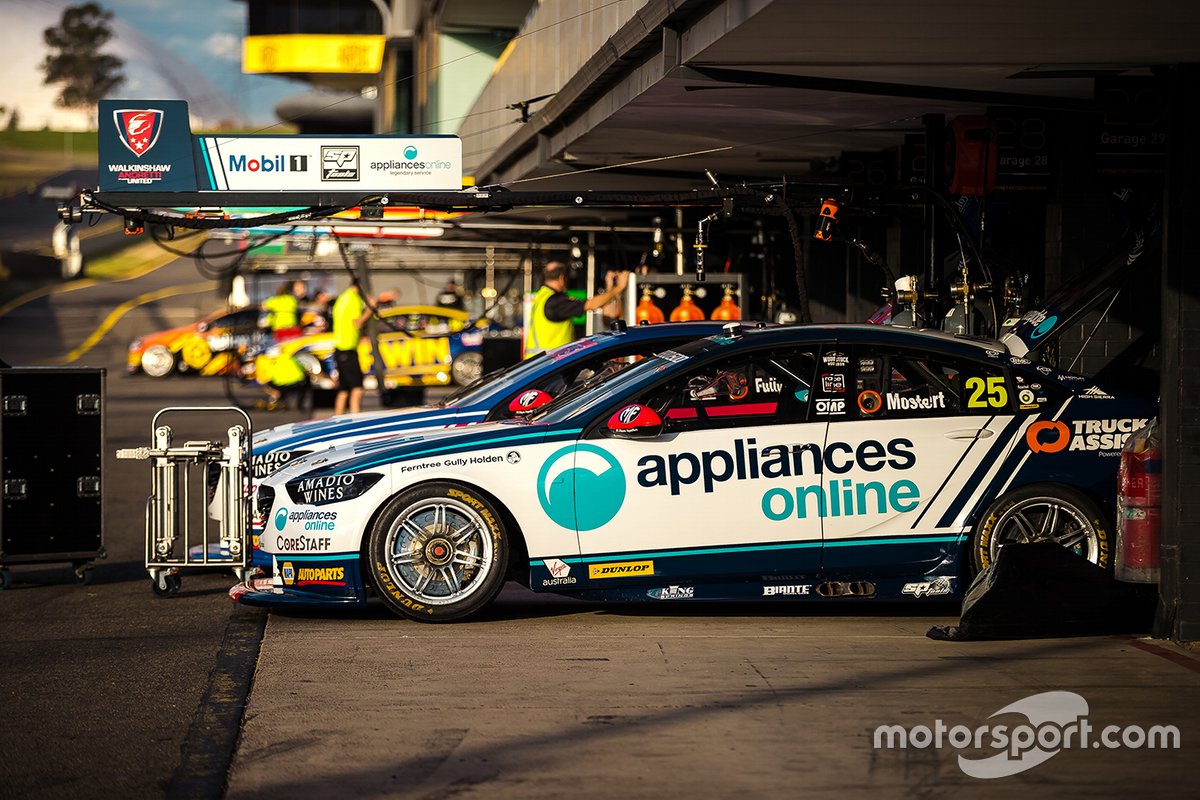 Stewart adds that the challenge wasn't limited to finding people willing to travel. He also had to care for the mental wellbeing of those that couldn't leave Melbourne for family reasons and felt they were letting the team down.

"There were some people that couldn't go, and we made it very clear that that was at no detriment to their position," he says. "There were a few I looked at and thought, 'I don't want them to put their hand up'.

"They feel terrible. We've been at pains to assure them that we understand their positions and that they are still much loved and valued people in our team. It's just that circumstances meant they couldn't make the jump when others could.

"There's a famous saying that the Hawthorn Football Club use that is if one man falls down, another steps up and takes his place. That was one of the feelings we had last Monday. Gaps appeared, and there would be three of four people coming to me directly and saying 'I'll do it'.

"It was an amazing feeling. It gives you faith that there's great bones and passion in the team."

That whole process was something driver Mark Winterbottom lived through. He's married and the father of three relatively young children. He was at his holiday home in the north of Victoria when the phone rang and he was told there was someone on the way to collect him.

His first job was to discuss what was happening with wife Renee, however he admits support to leave town was never going to be tough to come by.

"You put so much into this sport, not just week-in, week-out but your whole life has been spent to get to this moment to race cars," explains the 2015 series champion.

"You've got to have that chat with your partner and say 'are you okay that I'm going away for this long', and they're not going to say no, because they support everything that you do."

It may seem trivial in comparison, but another issue for Winterbottom was what to take with him.

Racing teams know what they need for a race weekend, and with freight lines still open between states, parts will be possible to get hold off as the circus heads from Sydney to south-east Queensland, then Darwin, then up to Townsville.

But with no return date and a wide-range of weather conditions between those places, Winterbottom says packing a bag was hard.

"Basics, when you have an hour to pack, you don't bring," he adds. "Training shorts, training tops... we had a group shop to load up on runners and all that sort of stuff.

"In an hour when you're chucking stuff in your bag, it was a rush. Plus we're packed for winter in Sydney, summer in Darwin, winter in Queensland and then... are we coming back here [to Sydney]?

"You're packing for the unknown future. I don't own that many clothes to pack for every season. And you're trying to fit it into a small bag." 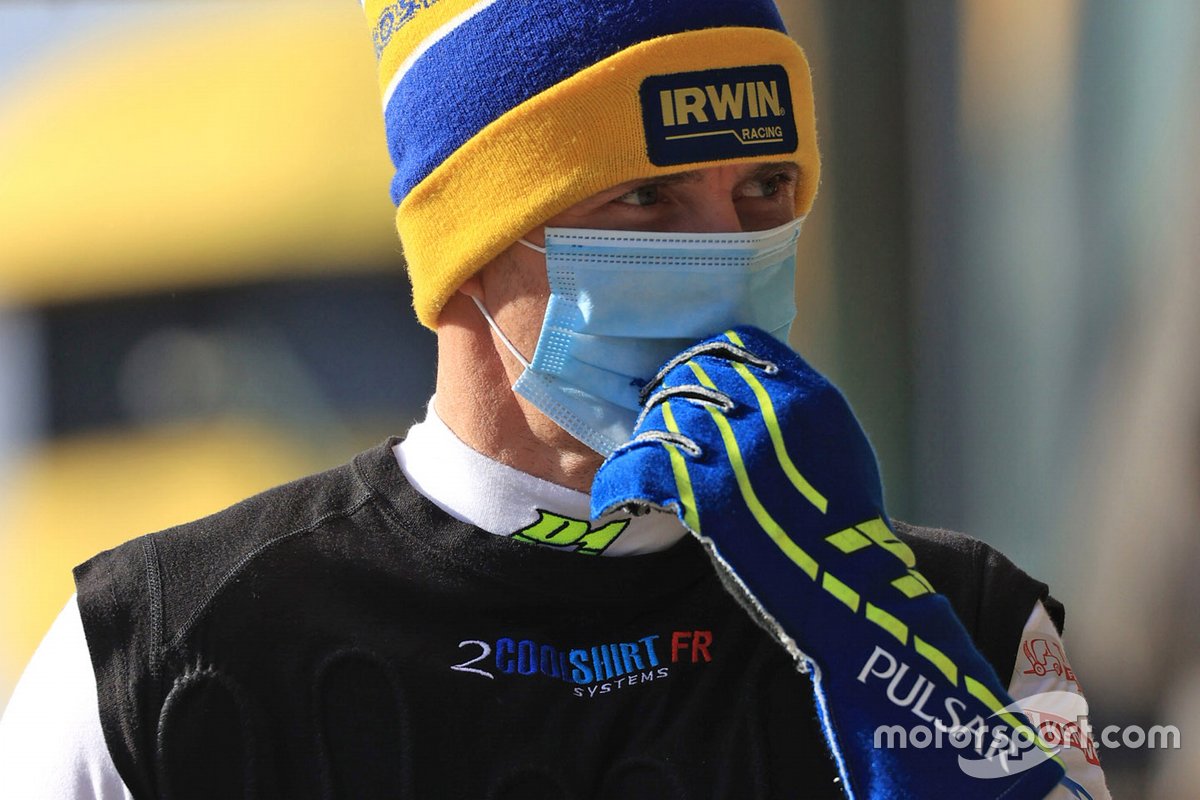 The cherry on top for all of those Victorian staff is the fact that Melbourne has since gone back to Stage 3 restrictions. That means partners aren't just dealing with kids on their own, but schools and playgrounds are closed and people are cut off from their social networks.

"As tough as it is on us here, the families at home are feeling it more," says Winterbottom. "They're getting told there's no school, they're home schooling, there's no football, there's no this, there's no that.

"We think we're doing it tough here but they're doing it tougher at home. We're trying to keep the support going, the network going, and trying to make sure when we get home, whenever we do, they haven't changed the locks and kicked us out."

It'll be a tough few weeks for those teams on the run, and the little wins in life will be important. One example of that is how Todd and Rick Kelly have so far been able to base their team at their family farm in Mildura, rather than subjecting staff to quarantine at the trackside hotel at Sydney Motorsport Park.

"I think that's made a big difference to morale, compared to being stuck in a motel room," says Kelly. "We've been sitting by the river around a campfire for the last few days. Once we'd done all we could on the cars we had a couple of days off on the farm.

"I think that went a long way to get us through that week, for sure." 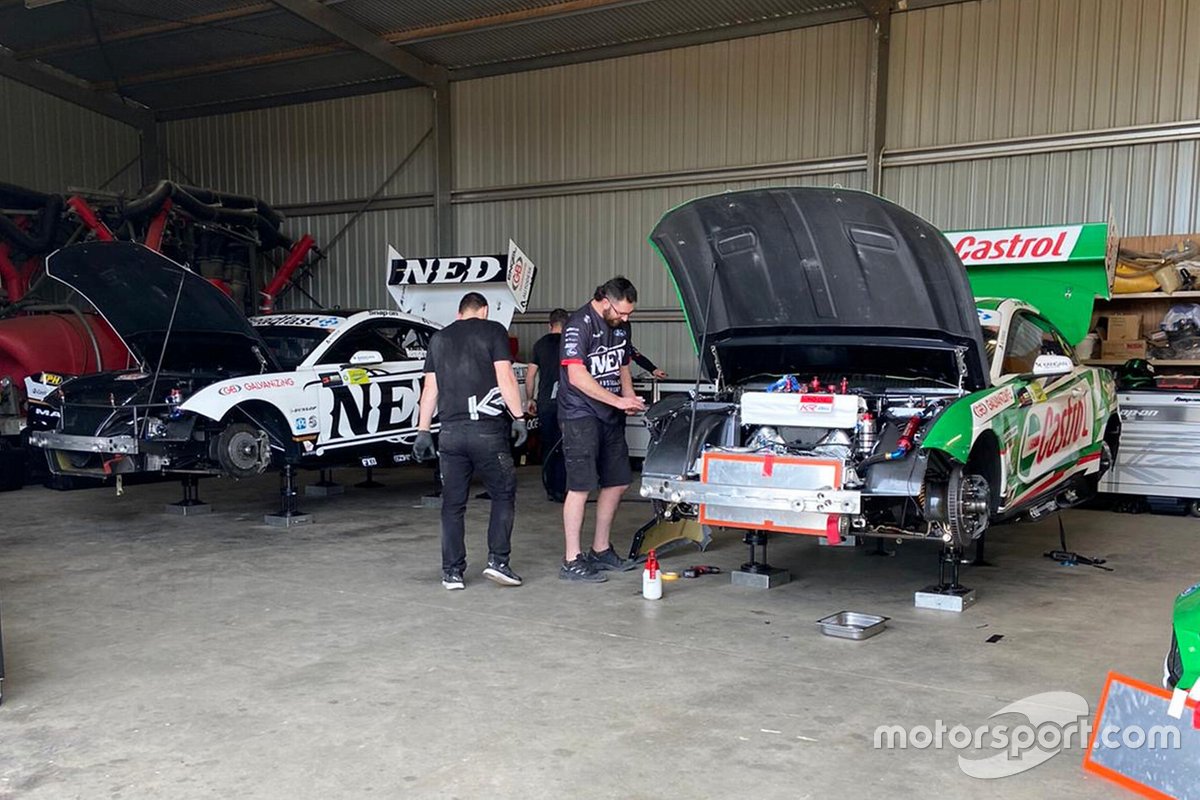 For race teams, of course, the best reward is what happens on-track.

"I'll give it to you straight – this weekend I want our cars to win," says Stewart. "I want Chaz [Mostert] and Bryce [Fullwood] to lead the way.

"But for the other spots on the podium, I'll be delighted to see any other Victorian teams up there. Because I know it will mean a lot for their crews, and their crews have been in isolation for 11, 12 days now.

"They don't get to go home on the weekend. They've had to live this. I'll be genuinely happy for any other teams from Victoria that are on the podium, Ford, Holden or otherwise.

"The real heroes this weekend are the crews from Victoria that made the commitment... often without having said goodbye to their wives and kids. That kind of stuff makes you realise the passion these people have for their sport."

In the drama stakes, the Supercars border dash was perhaps only bested by the A-League's comical attempt; Melbourne's three round-ball football clubs tried to get players across the border on the last flight out of Melbourne Airport, only to have fog in Canberra leave them stranded on the tarmac as the clock struck 12.

But that doesn't change the fact that July 6 will go down in history as the most extraordinary day in Supercars history.

Yes, there is another border rush waiting next week as teams look to distance themselves from the makings of a potential outbreak in Sydney with a safe haven in Queensland.

But it won't match the drama of the ticking clock and the response it sparked from those that keep the category's wheels turning.

"The passion and enthusiasm from the team to make it happen, to volunteer themselves for the sport and the team... that was equally astonishing [to the border closure], perhaps even more astonishing," says Stewart.

"It was an amazing feeling. Those guys took the leap of faith, not knowing how long it would be. I was like... 'wow, we've got some amazing people here'.

"I always thought that, you always like to think the best of people. But when shit hit the fan, people stood up. And that was truly impressive." 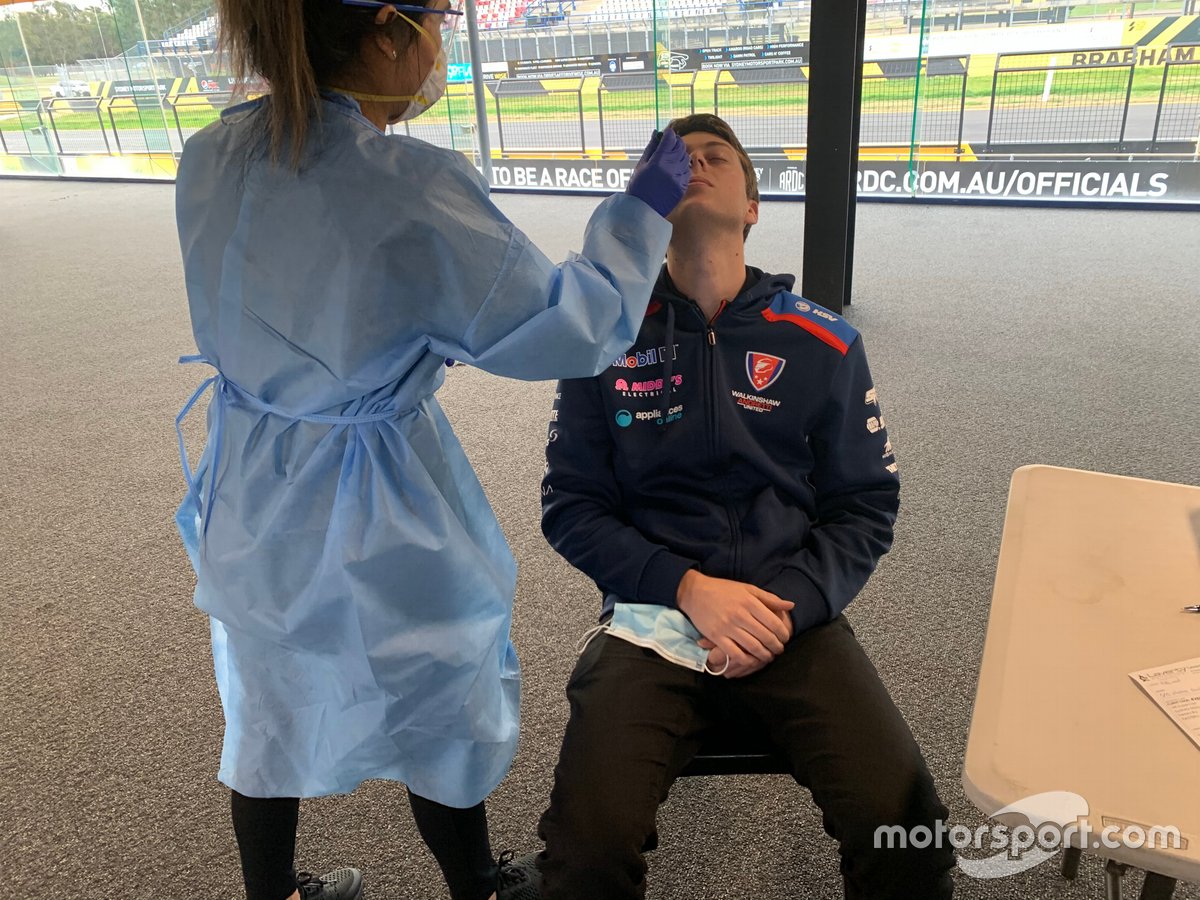