The IRWIN Racing crew will have a late night repairing their Ford Falcon after sustaining major damage in today's opening 300km race of the Gold Coast 600 on the streets of Surfers Paradise.

With regular driver Lee Holdsworth watching from the pits, French ace Simon Pagenaud got a strong start from 16th. 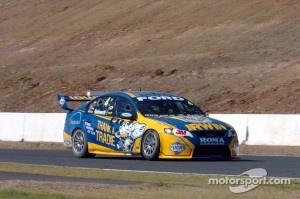 However, further up the road a collision between Tonio Liuzzi and James Hinchliffe set off a chain of events which left the IRWIN Falcon with extensive front-end damage and another car (Ricky Taylor) on its roof.

The race was immediately stopped while crews cleaned up the circuit, and the IRWIN Racing team assessed the damage.

Pagenaud walked away from the accident, but did have some bruising to his wrist.

Initial investigations by the team had them calling it a weekend, but further assessment has them confident that the car will be good to go tomorrow.

Simon Pagenaud: "I'm OK - just really annoyed to see how much damage there is on the car," said Pagenaud.

"Unfortunately doing standing starts with guys that are not used to it is creating issues every year. It's a shame but starting where we did we got into trouble.

"I had no room to go - that's the way it is - that's racing. It's a shame for the IRWIN crew and Lee as well, so I'm sorry about that, but there is nothing else I could have done.

Lee Holdsworth: "That's what happens when all the international drivers start the race," said Holdsworth.

"It wasn't Simon's fault, he got a ripper start. But a few of the guys up the front got shockers as they are not used to starting these cars.

"Tonio Liuzzi was a slowing car after colliding with another car and it left Simon with nowhere to go."

Ross Stone, IRWIN Racing Director: "It's always hard to get these cars off the line and when you have all the co-drivers starting it wasn't a real surprise that something was going to happen," said Ross Stone.

"We had practice starts the other day at Queensland Raceway, and for a lot of the guys it was the first time they had even done a standing start.

"Simon got away clean, but got tied-up in someone else's mess.

"I really didn't think the car would be running tomorrow and it was onto the next round at Abu Dhabi. But my brother Jimmy and the crew had a good look at things and they are confident that it will be repaired for tomorrow.

It will be a late night, but the boys will get stuck straight into it."

The beer that helped Holdsworth win the Bathurst 1000

Ford versus Holden documentary in the works