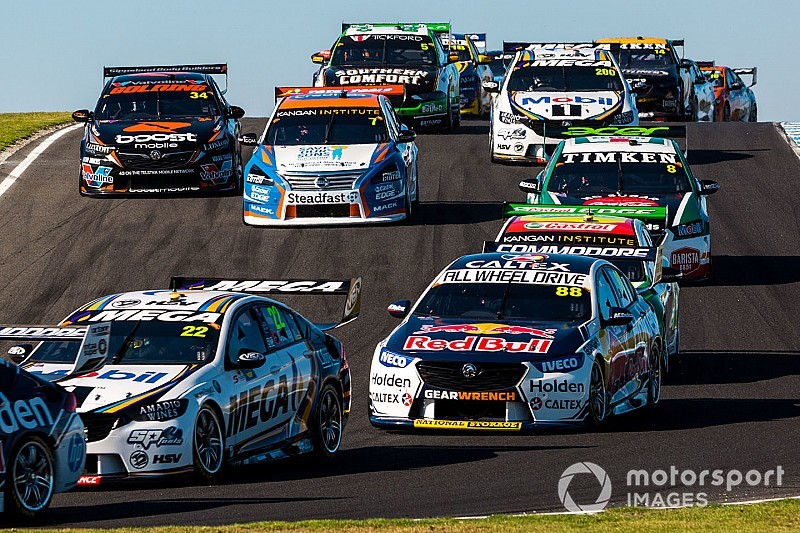 Supercars could lower its maximum horsepower limit to help alleviate engine costs, with the current units exceeding $120,000 in some cases.

The current Supercars field is split between five-litre pushrod Ford and GM V8s, and the 5.6-litre Nissan quad-cam unit that powers the Altimas.

Power is generally estimated at between 620 to 635 horsepower, with parity measured not on pure output, but in incremental rpm brackets. Those figures could be lowered, however, as part of ongoing cost containment in the category.

According to Supercars CEO Sean Seamer, rising engine costs is a "big ticket" item for the series to address – and less highly-strung engines could benefit the category not just in terms of costs, but also attracting new manufacturers that could be put off by the current technical expectations.

"Engines is a big ticket item. Anything we can do to save money that doesn't impact the show for fans, but also improves racing, we want to do," Seamer told the Below the Bonnet podcast on its latest episode.

"Linear springs, it's a perfect example of how we arrived at that.

"It's unbelievable that the engine builders and teams – with the exception of Nissan, which is an overhead cam engine – get pushrod engines to do what they do. They're on the limit and they're extremely expensive to build. Sometimes more than [$120,000].

"It's a hard [horsepower] number to hit, too – if you ask Todd Kelly or some of the other guys that have brought in new engines, they'll admit that hitting the number is not easy.

"If we pull the number back a little bit, what else can we do, so that it doesn't slow the cars down too much and they still look lively? Those discussions are going on.

"We know that if we can be more reasonable in our expectations of what horsepower we want an engine to achieve, and how long we want that engine to last, then we can start to have broader conversations."

Different engine types are technically allowed by the Gen2 Supercars regulations, however the only genuine attempt to stray away from the V8 – Holden's V6 twin-turbo – was shelved back in 2017.

Seamer maintains that forced induction continues to be a potential way forward for the category, although it may not mean the death of the famous V8.

"The thing that I feel we got a little bit lost on was that a turbo engine meant that it couldn't be a V8," he said.

"We know that we need to deliver a visceral experience to fans. It's got to be loud and it's got to be proud. But that doesn't mean that different types of induction shouldn't be considered, as long as it adds to the show.

"Hypothetically speaking, if you can put a five-litre V8 supercharged engine in that's going to cost $40,000 and you're only going to have to rebuild it twice, why wouldn't you look at it?"

Sean Seamer's full Below the Bonnet interview is available right now. Listen by clicking the play button below.