The Nissan Motorsport team will enjoy its first test since racing the new Nissan Altimas at Winton Motor Raceway in two weeks.

Rick and Todd Kelly have claimed ninth and 10th place in a solid comeback drive during the final race at Queensland Raceway today. 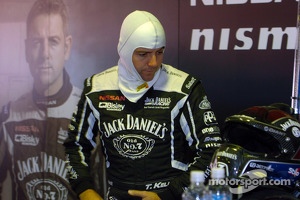 The Jack Daniel’s Racing brothers stormed into the top 10 at the ‘Paperclip,’ using good race pace and taking advantage of other's misfortunes.

The result marks the first time that Todd Kelly has finished inside the top 10 in the all-new Nissan Altimas.

To add to the team’s joy in the last race, Norton Hornets Nissan drivers James Moffat and Michael Caruso finished 12th and 16th respectively having started towards the back of the field.

Today’s first 100km sprint was one to forget, with all four Nissans finishing 21st, 22nd, 23rd and 24th in a frustrating race.

The Nissan Motorsport team will enjoy its first test since racing the new Nissan Altimas at Winton Motor Raceway in two weeks ahead of the next event on the V8 Supercars Championship at Winton on August 23-25.

Todd Kelly – #7 Jack Daniel’s Nissan Altima
"I qualified a lot better for the last race, starting 15th, but again there was some really average driving out there and I went back to the mid-20s early on in the race, guys were just running me straight off the track on exits," Todd Kelly said.

"I had to really use the car quite hard to get those positions back in the first third of the race and I was probably a little bit too aggressive and had a bit too much wheel spin, which didn't leave me much for the end of the race.

"Every time I had clear track the car was extremely fast, so it's a shame we couldn't convert that into a better result because the car was certainly capable of it."

Rick Kelly – #15 Jack Daniel’s Nissan Altima
"I'm excited by that last race, we normally have a great result on Saturday and a worse result on Sunday, so it's fantastic to leave the race weekend with the best result we got here in Ipswich," Rick Kelly said.

"The car in the first race was a little bit tough on me and we got bumped around a bit in both races, but for the second one, EP (Erik Pender) tuned it up for me and we managed to drive back through the field after Webb punted us off, all the way up to ninth.

"We just need a little bit more mumbo up the straights so we can qualify higher and we could definitely race there as well, so it's an exciting weekend for us that was full of progress."

James Moffat – #360 Norton Hornets Nissan Altima
“We had a reasonably good day yesterday, but today was pretty average, and to be fair, we only finished where we did because of other’s failures,” said James Moffat.

“We need to go back and have a look at why we lost some competitiveness. We clearly didn’t do a good enough job.

“On paper, Winton should be our best circuit, but we haven‘t tested there since we first had the car. All we can do is go up there, test well and come away with a package that is an improvement of where we have been.”

“There was speed with some of our cars during stages of the weekend, so we need to assess why we didn’t have that in qualifying.

“It was good to move from 28th up to 16th. There were a few positives there, but really, I just want to think about Winton now. It’s the team’s test track, we’ve got a test day coming up before the meeting, so all our focus needs to be placed on improving our results there.”