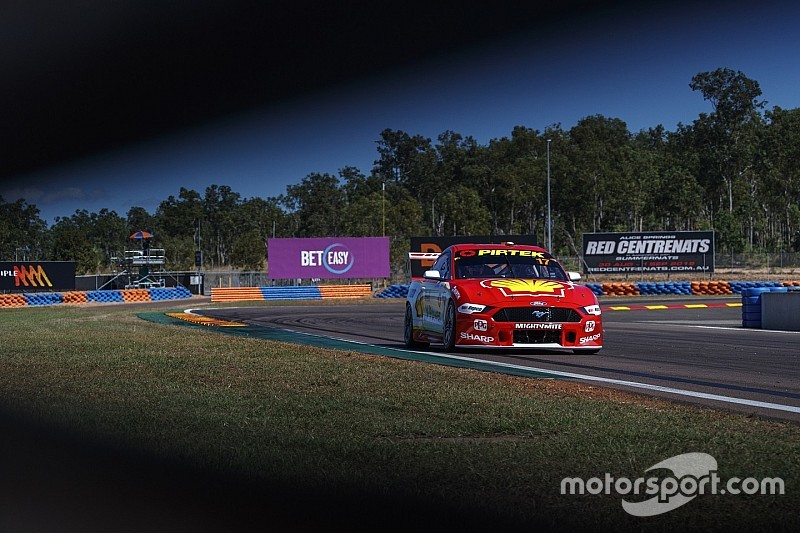 For the second session running it was David Reynolds that set the early pace, the Erebus driver straight under the Practice 1 benchmark with a 1m06.642s on his first flyer.

That time lasted until there was eight minutes to go, McLaughlin knocking Reynolds off top spot thanks to a 1m06.642s.

With drivers looking for a Top 10 spot to avoid Q1 tomorrow, that time was never going to be enough to survive the happy hour in the closing minutes.

However McLaughlin was up to the task, improving to a 1m06.080s on his final run to secure P1 right as he was starting to be shuffled down the order.

DJR Team Penske teammate Coulthard then made it a perfect session for the squad by popping up in second, 0.14s down on McLaughlin, on his very last lap.

“There’s so much more pressure now in practice. It’s tough, you’ve got to really be focused for the laps,” said McLaughlin.

“It’s always good to get one in, [Coulthard] is up there for the team too, which is great.”

That bumped Jamie Whincup back to third, the Red Bull Holden driver's rollercoaster session having including coming from outside the Top 10 on his final run, to briefly going fastest before the Penske Mustangs improved.

Practice 1 pacesetter Chaz Mostert ended up fourth, while Reynolds didn't find as big a gain as those around him and slipped back to fifth.

Lee Holdsworth, Anton De Pasquale and James Courtney were next, as Cam Waters was the final driver to secure his automatic passage to Q2, slotting into ninth ahead of Mark Winterbottom right on the flag.

"That's tough, you lose an extra set of tyres there," he said.

"But that's been about our pace lately in qualifying-spec. We need to find something. We changed the car drastically for this weekend, it feels completely different but we're the same speed."