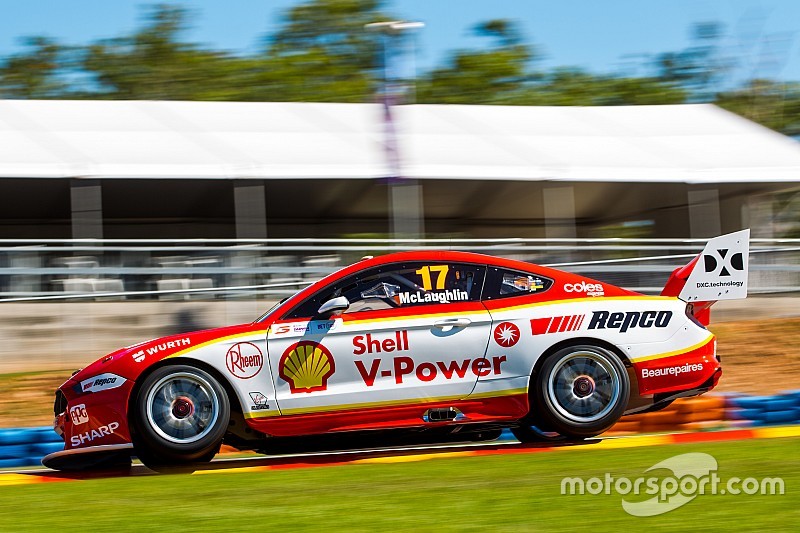 Scott McLaughlin has one hand on the elusive Darwin Triple Crown title after grabbing pole in the Top 10 Shootout.

The DJR Team Penske driver is vying to become the first driver to win the Triple Crown, which includes both Hidden Valley races and the Top 10 Shootout on the one weekend.

He's now checked two of the three boxes, thanks to a stunning lap at the end of the single-lap dash.

McLaughlin had to overcome teammate Fabian Coulthard in the Shootout, who benefitted from running early after being just ninth quickest in regular qualifying.

It meant Coulthard copped the absolute best of the conditions, using a timely smattering of cloud cover, and some sticky Michelin rubber left over from the preceding Carrera Cup race, to set a 1m05.841s.

Running last in the Shootout, McLaughlin had to dig deep to edge his teammate by 0.01s and keep the Triple Crown dream alive.

"That was a tough lap," said McLaughlin.

"Fabs did an awesome job, I definitely think the track at the start was pretty good, and then obviously got hotter with new rubber and stuff. So to punch out a lap there was awesome.

"I think we're looking good for the race."

David Reynolds will start third, one spot back from where he originally qualified, with Cam Waters on the outside of the second row.

Lee Holdsworth, who ran first in the Shootout, enjoyed similar conditions to C0ulthard, getting a gain of five spots on regular qualifying to pop up in fifth.

Anton De Pasquale will start sixth, Will Davison seventh after not running green rubber in the Shootout, and Chaz Mostert and Rick Kelly eighth and ninth.

Mark Winterbottom will start from the outside of the fifth row, the Team 18 dropping two spots after a right-front tyre failure in the braking zone for Turn 1 sent him off the road.