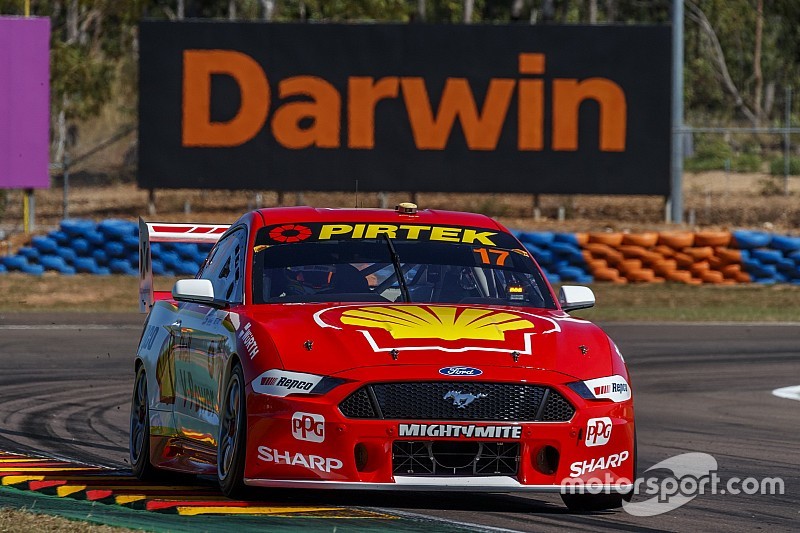 The DJR Team Penske driver made a slightly tardy getaway from pole, but hugging the inside line helped hold off a fast-starting Will Davison behind him, and a late-braking David Reynolds next to him.

A high line through Turn 1, and a bit of contact with teammate Anton De Pasquale who was even higher, was costly for Reynolds, who effectively went side-by-side with Davison all the way to Turn 6 before having to concede second place to the Tickford Mustang.

Behind the leaders it was a chaotic opening lap, starting with Macauley Jones and James Golding clashing on the way through the Turns 2/3/4 complex.

Rick Kelly then fired Tim Slade off on the way out of Turn 5, Slade's Brad Jones Racing Holden going straight into the fence.

The first-lap drama concluded with Mark Winterbottom half-spinning Andre Heimgartner to cause a bottleneck at the back of the field, and a triple-file battle down the long front straight.

The race was quickly pacified by the Safety Car, called to retrieve Slade's crashed Commodore at the end of Lap 2.

When the race restarted on Lap 8 McLaughlin's getaway was swift, to the point where he had almost 4s up his sleeve when Davison and Reynolds made their stops on Lap 19.

That stop proved crucial to the complexion of the lead group, with the Tickford/23 Red Racing crew releasing Davison into Reynolds' door as they went to leave the pits.

That meant a 15-second penalty for Davison, while Reynolds was jumped by an undercutting Mostert who had stopped four laps earlier.

There were no undercut concerns for McLaughin, though, who pitted on Lap 20 and returned with 3s margin over Mostert and Reynolds.

From there it was a walk in the park for McLaughlin, who cruised to his 11th win of the season by 6.8s.

“I think we were three-wide before I braked. I figured I was on the inside so I had probably the safest position.

“[I'm] so stoked for everyone at Shell V-Power Racing, it’s been an awesome run, we’ve got to just keep pushing on."

Mostert made the undercut work for him, holding off Reynolds to come home second. It was a four-spot gain for the Tickford star, his margin over the Erebus driver a single second at the finish.

Cam Waters finished fourth, holding off a late charge from Jamie Whincup, who went the opposite way to Mostert and made his stop on Lap 28.

Davison finished ninth on the road after dropping back in the second stint, but was then dumped to 12th thanks to that 15-second penalty.