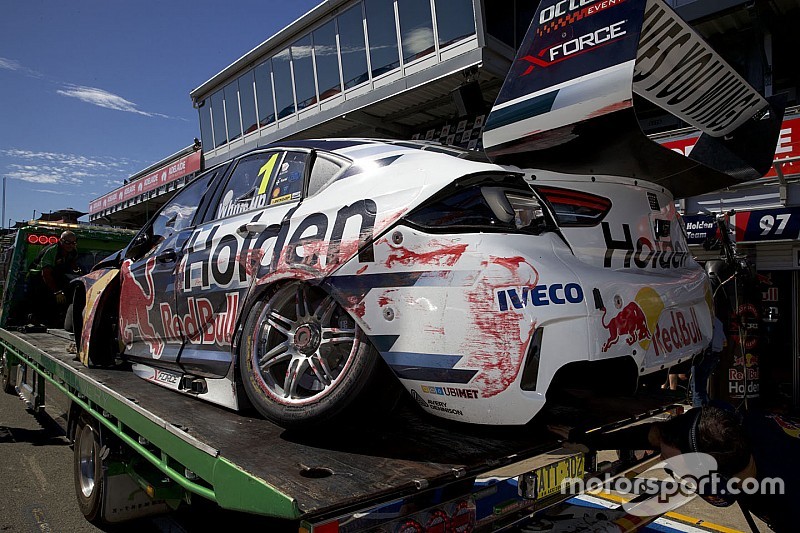 Jamie Whincup is unlikely to miss any on-track running at the Adelaide 500, with Triple Eight team manager Mark Dutton confident the car will be repaired overnight.

The Triple Eight squad is already underway with the repair of Whincup's brand new ZB Commodore, following the reigning champion's high-speed collision with the wall in the dying seconds of today's qualifying session.

While there were initial fears the car may not be fixable in time for tomorrow's action, Dutton says further inspection has revealed the damage is not terminal, and that Whincup should be on-track to fight for pole position during the Top 10 Shootout tomorrow morning.

"Definitely. It looked a lot worse on TV than reality," said Dutton when asked by Motorsport.com if the car is repairable.

"The car has done a good job.

"Three corners are toast, but the birdcage, the rear subframe, the front point on the left-rear has taken most of the impact.

"It’s broken off, done its job effectively, but it’s torn a bit of the metal. It hasn’t broken off cleanly for a bolt-on repair, but it’s a lot better than I first imagined."

Dutton is equally confident the car will be as close as possible to 100 per cent, with crucial parts undamaged in the shunt.

"When you look at the front the engine hasn’t moved, and the whole front subframe hasn’t been creased, which are the first things that go across quite easily," he said.

"The rear rails have had a bit of a tweak, but they’re meant to give.

"The most important thing is that the safety cage inside the car has zero damage. They’re race-droppers, you get a DNS, but there’s none of that.

He also said there are no issues with spares, despite the ZB being a brand new model.

"We haven’t damaged that many ZB specific parts. The left-front door is pretty bad, maybe a guard or so," he said.

"The rear quarter is a bit of paint which, along with the rear bar, should actually buff out.

"We’ve been very fortunate to not eat into the spares too much."

When asked how long he expects the repair to take, he said: "well into the night".