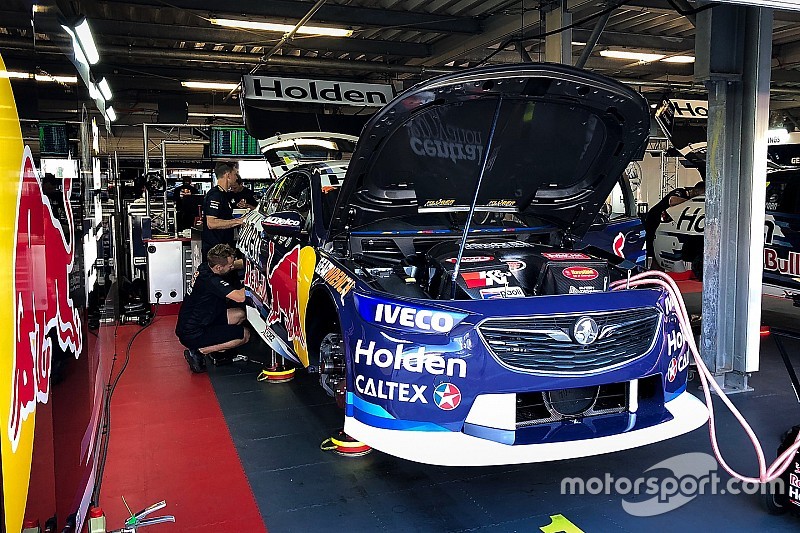 Jamie Whincup's Red Bull Commodore is fully repaired and ready to hit the track thanks to a repair job that ran into the early morning Adelaide time.

The reigning Supercars champion smashed his brand new ZB Commodore into the Turn 8 wall during yesterday evening's qualifying session, the impact throwing his whole weekend in doubt as the crew scrambled to see if the car was repairable.

It was relatively quickly established that it was fixable, but the job itself was a long one. Members of the #1 crew worked at the track until after 4am, completing what team manager Mark Dutton says was a complete four-corner rebuild.

"We managed to send a lot of people home around 12pm to 1am, then there was just the crew and a few extras here until 4:15am."

Dutton added that the late night was well worth it, with set-up work this morning revealing near-perfect geometry.

"We just dropped it on the patch and it was amazingly good," he said.

"The repairs were fantastic. You never expect it to be that good, even when you're just replacing bits for normal service without a shunt it's hard to be that close. Full credit to everyone there.

"We dropped it on and the toes were adjustable half a mill to a mill, so next to nothing. The corner weights were within half a turn to being bang on. Even when you just change a damper set the corner weights need a bit of a tweak, so that's within a tolerance of the car being where it was before it hit the wall.

"It's a really good repair, which is why we were there until 4am. We took our time, as painful as it was, to make sure it was as perfect as we could get it.

"The good thing is even at 3:45am, we're about the do run-up, and the guys looked at a thing and went 'I'm not 100 per cent happy with that, let's swap it'. It was only a small bit, but it shows the dedication. It was impressive because we were all pretty tired at that stage, and for them to go 'yep, cool, get the part and put it on', it was good.

"We had the time to replace things that didn't need to be replaced. There was rockers, there was extra pieces of componentry... even the right side didn't have any visual damage, but we replaced everything just to be sure.

"When there's such a whip on the other side, it can transfer through. The last thing we need is 'we didn't replace that because it should be fine', when it would have taken 10 minutes to do. The problem was, there was a whole lot of those 10-minute jobs..."

Asked about the cost of the all-night rebuild, Dutton estimated it would be over $100,000 save for being able to salvage any of the wrecked parts.

"It's expensive, because we replaced every single corner," he said.

"But that doesn't mean everything is junk. From the transaxle, the whole thing isn't destroyed. We'll probably get half of that salvaged, if not more. Even uprights and different parts that we replaced, they're not all a write off."

Crucially, he says the rebuild hasn't robbed the team of all of its ZB spares, which are still scarce due to it being a brand new car.

"For the ZB we didn't damage too much. The splitter is gone, and a left-front door. We did the left-rear door because it wasn't as beautiful as it could be.

"We haven't eaten heavily into that. It's all the chassis spares that we had a good chunk of. When you do a full car rebuild, that's decent.