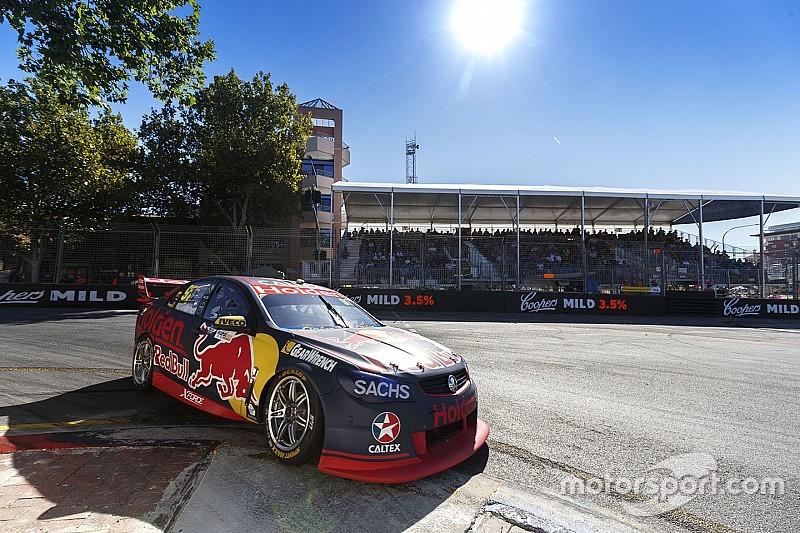 Shane van Gisbergen has secured another pole position in Adelaide, beating the DJR Team Penske Fords in the Top 10 Shootout.

But they were both beaten to pole by van Gisbergen, The Red Bull Holden driver storming to two-tenths up at Sector 2 before ultimately edging P1 by 0.02s after nudging the wall in the last sector.

“That was pretty exciting,” he said. “The Fords put the pressure on, they’ve been fast all week. It was a pretty messy lap in the last sector, but I had a good gain from the start. I’m so stoked, we’re in a position for a good result again this afternoon.”

While it was good news for one Triple Eight car, it was bad news for the other. Having been second in regular qualifying, Jamie Whincup’s Shootout lap barely lasted a corner after he was pinged for a kerb strike at Turn 1.

That meant his lap didn’t count, and he’ll start today’s race from 10th on the grid.

“Frustrating,” he said. “We’ve improved the car heaps today. I didn’t need that, I’m pretty pissed off with myself. We’ll see if we can make up some spots in the race.”

Cam Waters (Prodrive Ford) and Garth Tander (GRM Commodore) both moved up a couple of spots with the seventh and eighth best times.

Tim Slade (Brad Jones Racing) dropped a spot, slipping from eighth in qualifying to ninth after the Shootout thanks to a trip down the escape road at Turn 4.