This weekend’s trip to Queensland Raceway sees Australia’s V8 Supercars championship begin the second half of its season. Ahead of this key race, Garry Rogers Motorsport pilot Alexandre Prémat casts a glance back at the first stage of the campaign and looks to his future in the series. 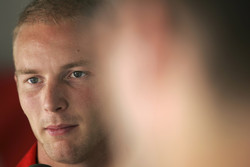 Prémat is frank and open when explaining that his maiden season in Australia’s premier racing series has not yet met his expectations. However, after putting in the hard work during the first half of 2012, he knows that while there are more challenges to come the worst is now behind him. Before travelling to Queensland for the ninth round of the championship he explains why today's struggles are laying the groundwork for future success.

What do you make of your first half-season in V8 Supercars?

Clearly it hasn’t been ideal, but I’d put that down to the fact that the car is both tricky to drive and difficult to set-up. Added to this we’re competing in a very tight championship in which 28 cars are separated by just seven or eight tenths of a second. Therefore you pay a very high price for the slightest mistake. My team-mate Michael Caruso and I have suffered in qualifying and, starting on the second half of the grid, we’re left with little hope for the races.

Has your lack of experience affected your results?

V8 Supercars is definitely a specialist discipline. You have to remain calm off-track, then balance aggression and finesse inside the car. My biggest problem is that we use our first set of new tires in qualifying, which makes it difficult for me to find the limits of the car and myself. We’ve also had problems understanding the tires in race conditions. There’s big front-end degradation and the slightest error can have dramatic results. For instance at Townsville, where I was on course to finish amongst the top ten, I braked three meters too late at one corner and destroyed the front tires! It's difficult, but these challenges motivate me even further.

How do you see the remainder of the championship progressing?

Early in the season I thought we’d be able to reach the top-five pretty quickly – but unfortunately that hasn’t happened! However the team knows why we’ve struggled and are focusing on next year. Therefore, the objective for the second half of the campaign will be to learn as much as possible, gain experience on all of the circuits and, in particular, try to do something special in the season’s blue riband event at Bathurst. We’ll also work on the new car which has been in production for two months and recently begun testing. My experience with the Audi R10 and R15 will be very helpful for this. In 2013 everybody starts from scratch with a new car and it is by working hard now that we’ll achieve success next year.

Do you ever wish that you’d stayed in Europe?

No, certainly not! It's going really well over here. The team are fantastic and my boss Garry (Rogers) is an extraordinary guy with a great sense of humor. The atmosphere in the championship is great and, crucially, my family are very happy here. My wife Cloé and daughters Sasha and Zoé have all fallen in love with Melbourne and the country as a whole. It's an extra motivator to make things work on-track!

And if you have never seen it before? Check out Alex Premat's huge crash when he was in the DTM