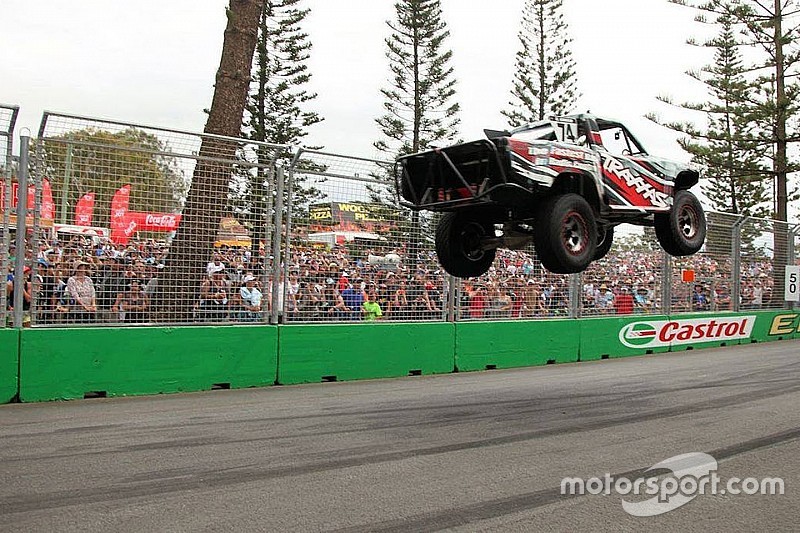 Boost Mobile boss and series rights holder Peter Adderton has blasted the Confederation of Australian Motorsport over the Stadium Super Trucks battle that has ended up in court.

A Melbourne courtroom is set to rule on the future of the American series in Australia next Wednesday, following a shock ban from the local governing body.

The ban, handed down just weeks before the Stadium Super Trucks were scheduled to appear at the Gold Coast Supercars round, came after a rogue wheel struck a pedestrian bridge during a race at Barbagallo Raceway in Perth earlier this year.

It also followed a clash between CAMS and series owner Robby Gordon last year over a burnout performed on a public street in Darwin.

According to Boost Mobile chief Adderton, who in May signed a three-year to be the rights holder for Stadium Super Trucks in Australia, what's ended up as a court case is more about a personal grudge than anything else.

"The fans absolutely love it. It brings in a younger fanbase, it brings in people that aren't necessary interested [in traditional motorsport]."

"We'll see what happens on Wednesday, what the judge decides. The fact that it went to court is pretty sad. It's not a good sign for motorsport in Australia when we're losing fans, and here's a sport that really entertains people, and we have to go to court to get it on a circuit.

"That, to me, is a waste of everyone's time and money.

"Here's the thing; if your job is the regulate the sport and you're not regulating – you're just burying your head in the sand because you don't like it for some reason or some person – then you're irrelevant. And you can sit there as long as you want, [but] there's not one sporting body in the world that doesn't move with the times, that doesn't become irrelevant.

"They'll get run over, CAMS will literally be a thing of the past if they don't get their act together and decide 'what do we have to do to improve the sport'."

While the Perth bridge incident was the catalyst for the pre-Gold Coast ban, it wasn't the first high-profile crash for the series. Back in 2016 Aussie stunt driver Matt Mingay was lucky to survive a horror truck shunt at the Detroit Belle Isle Grand Prix that left him needing extensive surgery on his jaw.

Adderton explained that he's happy to discuss ways to improve safety with CAMS, and that he reckons that would have been a better way forward than simply banning them.

"If you want to improve the safety, fine," he said. "What do you need to do to improve it, CAMS? Let us know.

"The fact that they banned them, and they're not allowed to race anymore, is ludicrous.

"If you want to improve the safety, then fine. We get that. We understand that."

Pressing ahead with series plan

With that three-year rights deal already signed, Adderton says he's hopeful of a positive outcome that will allow him to push on with plans to grow the category in Australia.

"[Boost Mobile is] right behind it," he said.

"We would love to do something bigger with it next year, we'd love to make it a series next year. I'd love to bring guys like Chad [Reed] and Jack Miller and Travis Pastrana and all these guys that are jumping in and racing the cars over here.

"It's fun, people love to see it. Hopefully it works itself out."