Fabian Coulthard won a thrilling opener at The Bend, as title rivals Scott McLaughlin and Jamie Whincup were involved in a sensational clash. 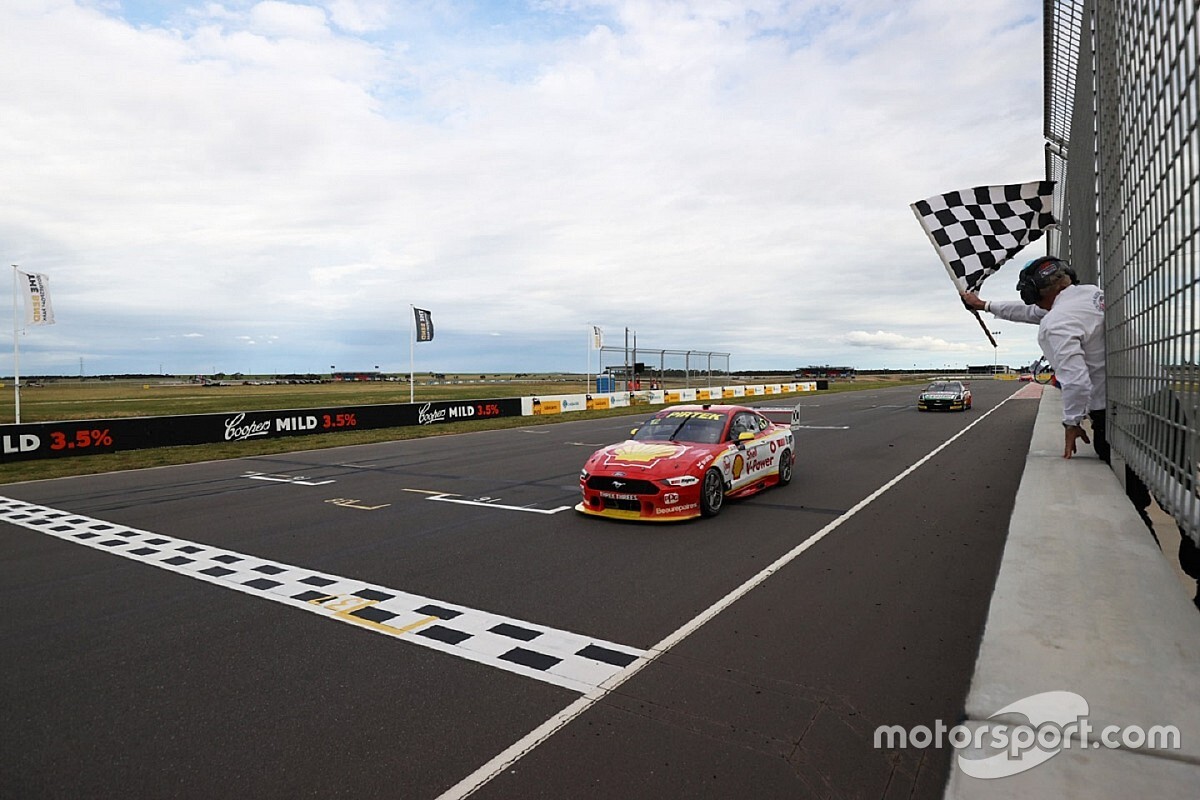 Coulthard triumphed by just four-tenths in what was remarkable 24-lap affair, the Kiwi getting the best of a three-way battle for the lead in the closing stages.

The three protagonists at the front were Coulthard, Shane van Gisbergen and Jack Le Brocq, the two Mustang drivers benefitting from the high tyre that hit the Triple Eight Holden hard.

Van Gisbergen had led the majority of the race, taking over at the front after McLaughlin and Whincup clashed on the first lap.

However tyre condition became a serious issue for van Gisbergen across the second stint, bringing Le Brocq and Coulthard into the game.

It was Le Brocq that looked the racier of the three, however two attempts at passing van Gisbergen led to him running wide and losing a position to Coulthard.

The second time Coulthard didn't give it back either, passing van Gisbergen at the start of the penultimate lap and then holding off Le Brocq to secure his first win in 41 starts.

"Forty one is a long time," said Coulthard.

"To get a win is awesome. We bided our time there at the end. [The car] has been good, but we can always improve and make it better."

Van Gisbergen, meanwhile, went from leading across the line with two laps to go to finishing way down in ninth, the T8 driver swamped thanks to his lifeless Dunlops.

The big story of the race, however, was the clash between the title contenders.

McLaughlin and Whincup were the big winners from the start, the pair vaulting from second and fourth respectively on the grid to first and second by the exit of the first corner.

The seven-time champion then looked to quickly overhaul McLaughlin with a dive into Turn 17, some staunch defence from the leader combined with locked rear tyres from Whincup leading to contact that sent them both off the road.

Whincup had the better initial recovery, re-joining in 10th, but was swiftly whacked with a 15-second time penalty that meant the best he could manage was 19th.

McLaughlin, meanwhile, was 19th after the clash, but a rapid second stint helped him climb all the way to third by the finish.

He wasn't classified third, though, a post-race 15-second penalty for contact on Lee Holdsworth two laps from home dropping him to 15th.

He still leads the series, though, his gap now 151 points over Whincup.

Cam Waters and Rick Kelly weren't far behind in fifth and sixth, while Scott Pye and Anton De Pasquale were also able to get by van Gisbergen over the last two laps.

Mostert's race was similar to van Gisbergen, his pole yielding a disappointing 12th place. He had been in the fight for the podium until his Lap 7 stop, but dropped like a stone on his second tyre set.