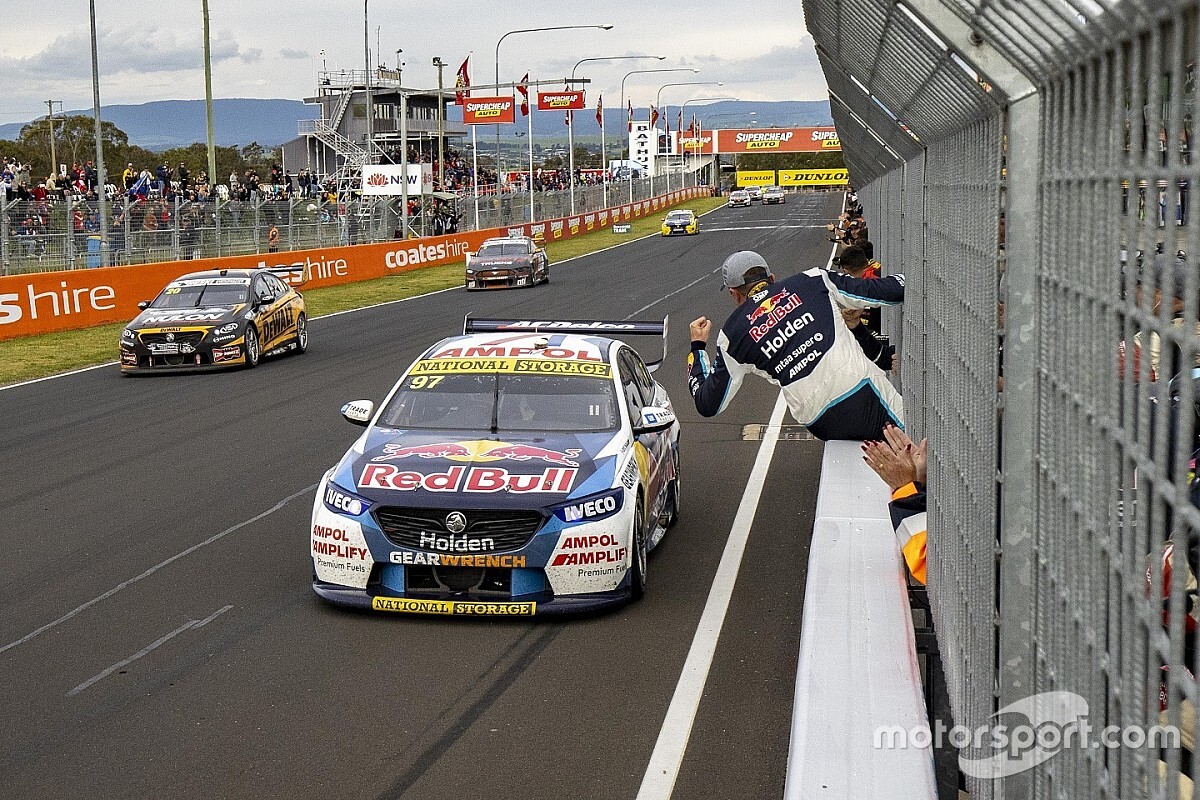 Shane van Gisbergen is finally a Bathurst 1000 winner, he and Garth Tander taking a thrilling Great Race victory in Holden's final race as a factory team in Supercars.

Van Gisbergen took control of the race shortly before the mid-way point, using a short burst of rain to wrangle a lead that the #97 would effectively hold for the rest of the afternoon.

Not that it was easy, two restarts in the last nine laps keeping Cam Waters in the game right until the finish.

However thanks to a brilliant driver after the final restart, van Gisbergen setting the fastest lap of the race on the second last tour, there was one last Bathurst win for the Holden Racing Team.

"The last few laps were really rough with the safety cars. But the team did a faultless job, the car got better all weekend. Thanks to Garth, he did an awesome job. I just wish mum and dad were here.

"But man, all those last three stints were qualifying laps. Just awesome."

The second half of the race started with the co-drivers completing their stints, Tander leading Tim Slade, Will Davison and Tony D'Alberto.

That was until a Lap 97 safety car, triggered by Brad Jones Racing teammates Macauley Jones and Jack Smith getting together at Murray's Corner, which kicked off the next round of stops.

While Tander, Davison and D'Alberto were done for the day and could hand over to their respective primary drivers, Slade hadn't quite hit his minimum target – which meant another stint, against the aces.

That saw the #17 drop to the back of the lead group, Waters passing Slade for second at the restart, before Chaz Mostert and Fabian Coulthard worked their way past.

On Lap 115, with Slade in fifth and 15 seconds off leader van Gisbergen, the #17 pitted for McLaughlin to take over for the run home.

The rest of the front-runners made their penultimate stops on Lap 120, van Gisbergen and Waters coming in together and heading back out together, just over a second between them.

Mostert held on to third, while McLaughlin used an undercut to jump teammate Coulthard for fourth.

Those positions were reversed in the final round of stops, McLaughlin dropping back to fifth after pitting three laps earlier than Coulthard.

The two leaders, meanwhile, made their stops together on Lap 141, van Gisbergen coming in with a 3s gap, but leaving with barely a couple of tenths to his name.

Part of the difference was an aggressive pit entry from Waters, while van Gisbergen was slightly delayed on the way out as Coulthard came across his pit bay.

But while he was able to shadow van Gisbergen, Waters couldn't find a way past during the small window where he seemed to have the edge on pace.

Just as van Gisbergen reclaimed the upper hand in the battle the race was neutralised again, two separate incidents – Bryce Fullwood in the wall on the way into the Elbow and Jack Smith in the sand at The Chase – bringing out the Safety Car.

Van Gisbergen successfully got through the restart with six laps to go, but again it was short-lived. Within a lap the yellow flags were flying again, courtesy of Zane Goddard whacking the wall at McPhillamy Park.

That meant one last safety car with three laps to go, which is where van Gisbergen really shined. He set the fastest final sector on the restart lap, before logging the fastest time of the whole race on the penultimate lap.

That sealed the deal, van Gisbergen crossing the line for his first Bathurst win, and Tander's fourth – on the 20th anniversary of his maiden triumph with Garry Rogers Motorsport back in 2000.

Waters and Davison were second, as Chaz Mostert crossed the line third to seal Warren Luff's sixth time in the last nine years.

The Penske Fords were next, Coulthard/D'Alberto leading McLaughlin/Slade, while Scott Pye and Dean Fiore were sixth.