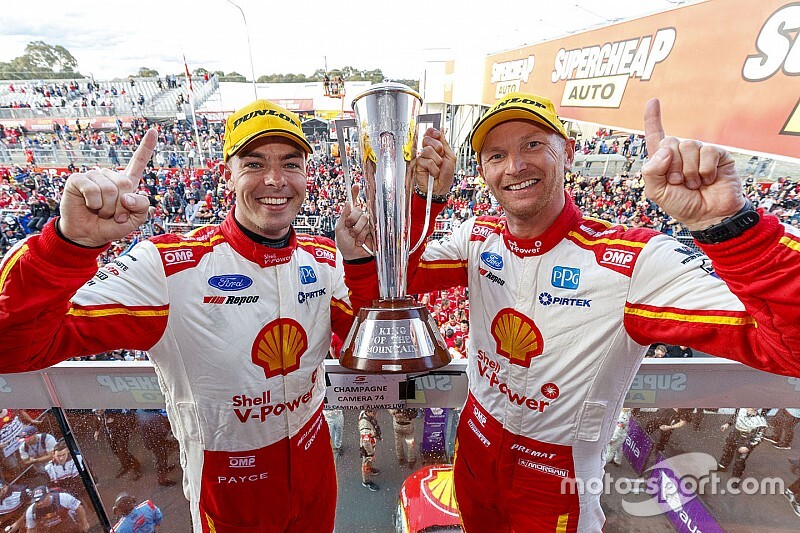 Scott McLaughlin and Alex Premat won the 2019 Bathurst 1000 after the Kiwi held off Shane van Gisbergen in a nail-biting run to the flag.

The #17 Penske Ford was questionable on fuel across the final stint, McLaughlin balancing attack and economy while dealing with mirrors full of van Gisbergen.

Adding to the drama was a Safety Car three laps from the end, the race going green for a single-lap dash to the flag.

But McLaughlin was good enough to hold on, securing he and Premat's first Bathurst triumph, and a first for the Dick Johnson Racing/DJR Team Penske squad since Johnson and John Bowe's truymph in 1994.

“I’m so proud of everyone. We made a bloody good car. I’ve dreamt about this, standing on that roof.”

Craig Lowndes and Alex Premat kicked off the second half of the race running nose-to-tail, the seven-time Great Race winner unable to shake the Frenchman.

On Lap 91 the Red Bull Holden driver made a rare pair of mistakes, tagging the wall at Reid Park before running wide at the last corner.

The second slip-up cost Lowndes the lead, Premat heading the field for the next four laps before pitting to hand over to McLaughlin.

Whincup jumped in the #888 three laps later, by which point McLaughlin was the best part of 6s down the road.

But that gap disappeared on Lap 101 when Todd Hazelwood went into the wall between Reid and Sulman Parks, leading to the second Safety Car of the day.

That came at a bad time for the #55 Ford and the #97 Holden, which had to sit behind the Safety Car for the best part of a lap before making their fifth stops.

That dumped Shane van Gisbergen and Chaz Mostert back to ninth and 10th respectively, rather than right in the lead group.

When the race restarted on Lap 105 McLaughlin was able to cruise away from Whincup, the gap quickly blowing out to 3s as the points leader lowered the race lap record by the best part of a second.

The Safety Car made a third appearance on Lap 113 when Jake Kostecki crashed at Reid Park, sparking a frantic dash to pitlane.

Whincup managed to jump McLaughlin, while van Gisbergen and Fabian Coulthard were both forced to double-stack and dropped behind Cam Waters, Mostert and Andre Heimgartner.

The battle at the front resumed after a Lap 117 restart, McLaughlin parked under Whincup's rear wing.

Waters and Mostert were doing likewise in third and fourth, only for the Tickford pair to come to blows at The Chase on Lap 123.

Mostert appeared to instigate the teammate tangle by braking too late, tagging Waters and firing them both into the gravel.

Mostert got going for the restart, but between the long wait in gravel and a drive-through penalty he was dumped outside the Top 20.

Van Gisbergen was the only one of the contenders to pit during the Safety Car, dropping back to eighth but opening up his fuel window.

The Lap 127 restart was short-lived, a jammed throttle sending Anton De Pasquale into the wall at Reid Park.

The race went green again on Lap 130, only for Alexander Rossi to spin at the last corner four laps later and bring out the Safety Car for a sixth time.

Whincup and McLaughlin pitted immediately, the former handed a small break when the latter stalled on the way out of the box and let two lapped cars in between the lead pair.

Coulthard, meanwhile, tried to crawl to the lane to avoid a double-stack behind McLaughlin. The stewards were wise to his trick, however, handing him a drive-through penalty and taking him out of contention.

Whincup's lapped traffic reprieve was brief after the Lap 137 restart, McLaughlin quickly back on the rear bumper of the Red Bull Holden.

He stayed there until Lap 141, at which point the lead pair made drastically different strategic decisions; while McLaughlin dropped back to save fuel, Whincup committed to another stop and sprinted into the distance.

Whincup bit the bullet and made that stop when Garry Jacobson and Richie Stanaway clashed at Turn 1 on Lap 151, McLaughlin taking over the lead as the #888 Holden dropped to fourth, behind James Courtney.

The short Safety Car intervention didn't cure all of McLaughlin's fuel woes, with more conservation required as soon as the race went green again on Lap 153.

On Lap 158 there was a final twist in the tale when Heimgartner hit the wall at the Elbow. That eased McLaughlin's fuel woes, but ensured van Gisbergen would be well within striking distance for the single-lap dash to the flag.

Van Gisbergen did manage to tag onto the back of McLaughlin at the restart, but McLaughlin was in no mood to surrender the lead, holding on for a spectacular win.

Courtney and Jack Perkins finished up a somewhat surprising third, clever work in the pits under earlier Safety Cars getting the Walkinshaw Andretti United pair in the position to jump Whincup when he made that late stop.

Whincup and Lowndes finished third, while David Reynolds and Luke Youlden went all the way from 22nd on the grid to fifth, despite Youlden spinning at Hell Corner earlier in the race.

Coulthard and D'Alberto dropped back to sixth after that Safety Car infringement, followed by Mark Winterbottom/Steve Richards and Scott Pye/Warren Luff.

Heimgartner's late crash made Rick Kelly/Dale Wood the best-placed Nissan in ninth, while Lee Holdsworth and Thomas Randle finished as the best Tickford entry in 10th.

Coulthard on Bathurst controversy: "That's not my style"