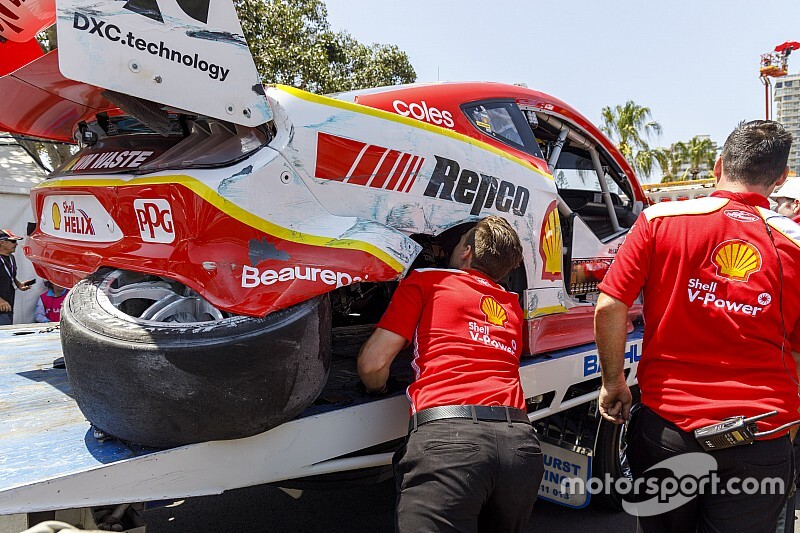 Scott McLaughlin's Bathurst-winning Penske Mustang won't race again, the team opting to park it after its heavy hit on the Gold Coast yesterday.

It's one of two cars to suffer career-ending shunts on the streets of Surfers Paradise, Chaz Mostert writing off his Tickford Mustang in Saturday's Top 10 Shootout.

It's also the second Bathurst winner to be taken out of active service in as many rounds, the 2017 David Reynolds/Luke Youlden car wiped out by Anton De Pasquale's nasty crash at Mount Panorama earlier this month.

DJR Team Penske has confirmed that the McLaughlin car will be repaired following the frightening GC shunt, however not in time for the upcoming Sandown 500.

With plans already in place to retire the car at season's end, DJRTP has decided to fast-track the build of a new Mustang earmarked for 2020, which McLaughlin will now debut next time out.

The crashed chassis will then be repaired over time, fitted with the panels and engine that it won Bathurst with (which were all removed following the Mount Panorama triumph), and retired from active competition.

"The damage is quite extensive, there’s bends and kinks and ripples in the floor past the firewall, which is never a good sign," said DJRTP boss Ryan Story.

"To repair that chassis when we have intentions of retiring of it since it’s a Bathurst winner doesn’t really make a lot of sense.

"We’re very fortunate to have a brand-new chassis at the shop and we’ll build that up over the course of the next few days and race that at Sandown."

McLaughlin debuted the car in Adelaide to open the 2019 season, taking it to a record-breaking 18 wins including the Great Race.

Once restored the car will go in display at DJRTP HQ in Queensland, Story not prepared to go through the de-registration process required to deliver it to Team Penske's US base.

"It’s too current. The [2018 title-winning] Falcon probably will, next year, but this thing is too current," he said.

"We want to keep it in Bathurst-spec. To send it over we’ll have to cut the undertray out of it and I want it to be the Bathurst car."