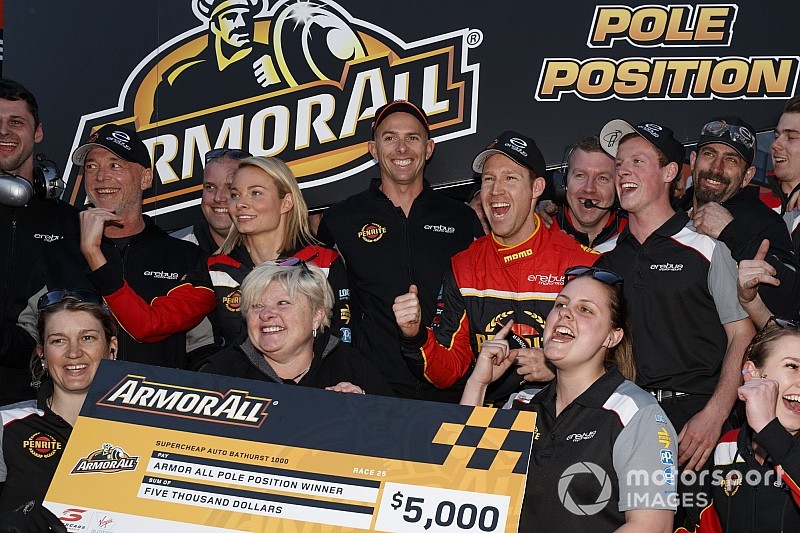 In a thrilling single-lap battle for pole, Reynolds posted a 2m04.058s to not only edge out a stunning effort from rookie teammate Anton De Pasquale, but leave provisional polesitter Whincup with a mountain to climb as the last man out.

It proved too much by the smallest of margins, Whincup falling 0.009s short of the Erebus driver.

“My young teammate did a pretty amazing time, I couldn’t let him beat me, so I had to go a couple of tenths down the road. I threw everything at it, that’s all I had left.

“Our cars are so fast; the team has done a brilliant job. I just want to win again tomorrow.”

Whincup added: “I’m really happy with that lap, I didn’t over-push. A front-row for tomorrow, I couldn’t ask for more.

“It’s a big night already tonight, so not being on pole is not a bad thing to be honest.”

De Pasquale ended up third on the grid, but it could have been even better. After being ninth quickest in regular qualifying, the Bathurst 1000 rookie looked like he could have been on for a late 2m03s after an impressive first pair of sectors on his Shootout lap.

Running slightly wide at Murray's Corner put paid to that, however a 2m04.349s and a gain of seven spots was still a decent outcome.

“It was very stressful,” he said.

“The lap felt good, I wasn’t sure it’d be as good as third, but once a few guys went out it was starting to get serious that we could be quite high.

“I’m very happy, to start third in only our second ever enduro, I’m pretty stoked. We’ll have  a bit think about it tonight and obviously it’s a long, long day tomorrow.”

Shane van Gisbergen will join De Pasquale on the second row, the Kiwi matching his qualifying effort with the fourth-best time.

Tickford's sole Shootout participant Cam Waters was sixth fastest, ahead of Nick Percat who faced a healthy dose of oversteer on his way into The Cutting in his BJR Holden.

James Courtney was the first driver to miss out on a 2m04s, the Walkinshaw driver losing three spots compared to qualifying with a 2m05.003s.

Craig Lowndes didn't get the best out of his 17th and final Shootout appearance, a 2m05.083s dropping him down to ninth after running fifth in the single-lap dash.

Garth Tander ended up 10th, right where he started, having cost himself on the run up Mountain Straight after running over the kerb on the exit of Turn 1.

Holdsworth on the Supercars driver market for 2019