‘Aggressive approach’ pays off for Prodrive 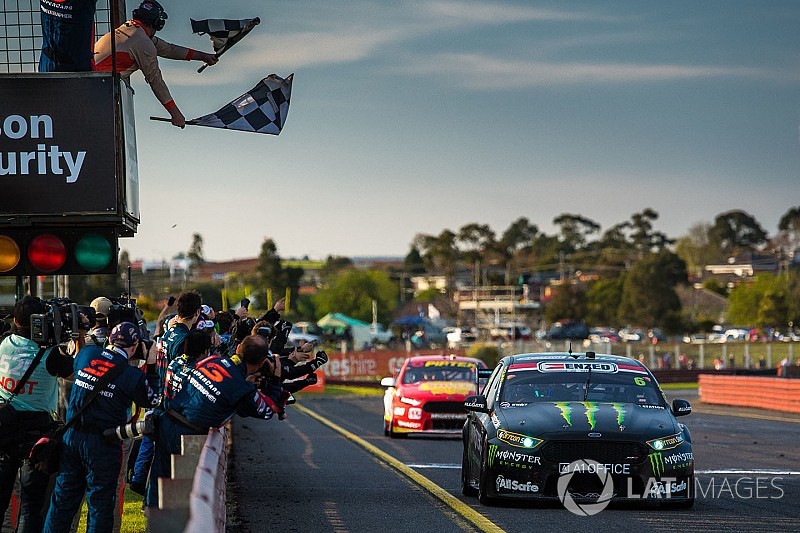 Prodrive Racing Australia boss Tim Edwards says yesterday’s Sandown 500 win for Cam Waters and Richie Stanaway comes off the back of an ‘aggressive approach’ to its upgrades and development this season.

The Melbourne-based team has endured varying form across its four cars this year, struggling to consistently match DJR Team Penske and Triple Eight despite a couple of sprint round race wins for Chaz Mostert at Phillip Island and Queensland Raceway.

But a raft of upgrades – understood to partially related to the engine – resulted in what looked to be a step forward in performance at Sandown over the weekend. Young guns Waters and Stanaway triumphed on what is a horsepower circuit, with Mostert and Steve Owen finishing third.

While cagey about the engine upgrades, team boss Edwards said the overall boost in pace was down to an aggressive development path that the team has been following all season.

“There are many upgrades, and some may or may not be the engine,” Edwards told Motorsport.com.

“There are new bits on the car at just about every race we go to. It’s what we do, as does every team. We’re all re-inventing the wheel all the time, figuring out a better way to do something.

“We’ve been pretty aggressive in our approach all year, and it bit us in Darwin because we were super aggressive with a load of new parts, and the Sunday was a disaster.

“So being super aggressive can bite you in the arse. But we’re not here to just make up the numbers.

“We’ll carry on being aggressive, because we want to be P1.”

Waters was a little more detailed in his assessment of Prodrive’s gains, claiming that the engine upgrades will be very useful when the Bathurst 1000 kicks off next month.

“It gives us a lot more confidence going to Bathurst,” he said.

“It is all about horsepower there and I think what we have done with the motors – which hasn’t been said much I guess – we upgraded them and the cars were quite quick down the straights this weekend.

“That is really confidence-inspiring for us to go to Bathurst with that.

“In saying that, the cars were really good as well, it wasn’t just the engines, the engineering department have done a amazing job to make sure we have got quick cars and the engine shop has done a good job.

“We’re really confident going to Bathurst with a genuine shot to win.”

While acknowledging the PRA performance at Sandown, the Penske and Triple Eight teams were playing it cool on Sunday evening.

“Honestly it was good, those guys are strong too,” said DJR Team Penske driver and points leader Scott McLaughlin, who failed to hunt down Waters at Sandown yesterday.

“I think they have definitely upgraded their package, you can tell that. And we were pretty on par for all that sort of stuff.”

“That’s only a very small function. Obviously it’s a very important function, but when everyone is so close, the aero, and how you set the car up plays such a big role.

“It is crazy how sensitive they are. You’d be very surprised the difference in lap time you can get from some minor changes in the car and its behaviour in straightline handling. It’s phenomenal.

“As I said, I back Kenny Mac. Then we just need to make sure we do a good job with the car.”