Changes in the V8 Supercars made for an interesting first day of the Clipsal 500 on the streets of Adelaide. Besides the addition of Nissan and Mercedes to the series, a new driver appeared from the MotoGP ranks.

The sun dawned on a new area in V8 Supercar racing with the Car of the Future getting a work out around the streets of Adelaide. Although the test day was two weeks ago in Sydney it didn’t give the teams the opportunity to really put the pedal to the metal. As predicted, the Holden, Ford show would prove to dominate as the new manufacturers of Nissan and Mercedes have not had the years of race development in this country.

Kiwi and Mercedes defector Shane Van Gisbergen was behind the wheel of a Holden after leaving Ford in controversial circumstances when Stone Bros Racing sold to Erebus Motorsport. The “Giz” behind the wheel of the Tekno Autosport VIP Petfood Commodore was in the top 5 during the practice sessions and pulled off his first pole position for tomorrow’s first race. During the press conference Van Gisbergen remained tight lipped about what was brewing behind the scenes. Some say he will face legal action, others say he won’t.

Triple 888 Racing who run Red Bull Racing ensured that they remain at the pointy end of the field. They supply engines to Tekno Autosports and some parts to Brad Jones Racing. Result equals 4.5 cars in the Top 10.

Of the field of 28 cars, Todd Kelly was the highest placed of the Nissans in 15th whilst Lee Holdsworth was the best placed for the Mercedes outfit. Whether they can improve tomorrow for the first of the two races, only time will tell. I wouldn’t be putting any money on it. 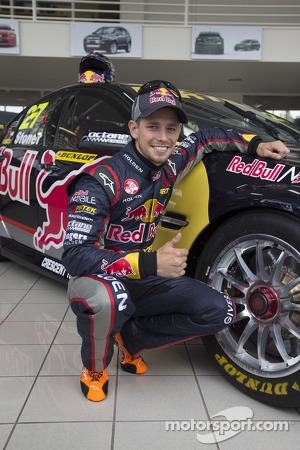 Former two time World Moto GP champion, Casey Stoner made his debut in the second tier category Dunlop Development Series qualifying 16th out of a field of 30. His first race proved to be a disaster after he clipped the concrete wall at half race distance. He certainly will be looking for much better than a DNF for his first race on four wheels.

SVG in the spotlight again with Clipsal 500 pole

V8SuperCar driver David Reynolds is “driving for his career”