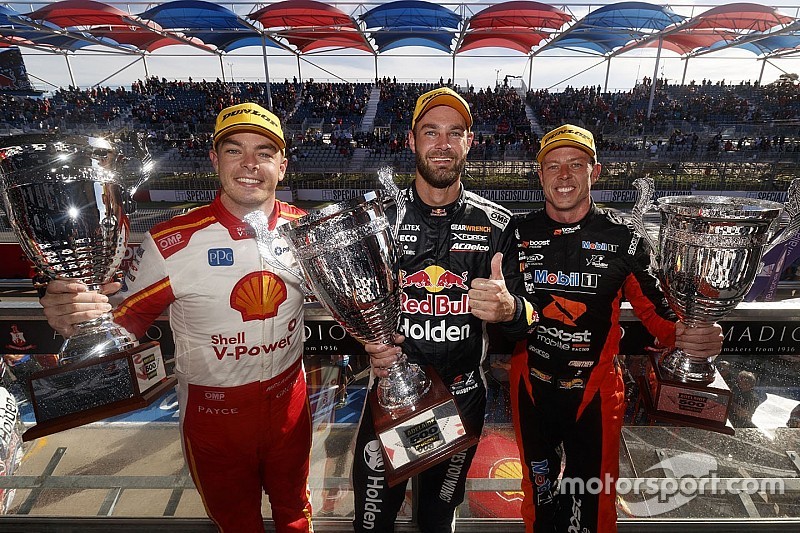 Shane van Gisbergen gave the brand new Commodore a perfect Supercars debut, with a dominant win on the streets of Adelaide.

A slow getaway from pole meant van Gisbergen spent the opening part of the first stint patiently sitting behind McLaughlin and a fast-starting Courtney, who jumped him from the second row.

On Lap 9 that patience began to pay dividends when McLaughlin made his first stop, Courtney following suit six laps later to leave van Gisbergen out front.

Van Gisbergen opted to charge on, waiting until Lap 24 to finally hit the lane for the first time. It was a long stop too, the Kiwi dropping back to what was effectively fifth place after taking on a lot of fuel.

While at that stage he was 10 seconds behind leader Courtney – who had jumped McLaughlin in the stops – it quickly became clear that van Gisbergen was in the box seat in terms of both pace and strategy. He quickly cleared teammate Jamie Whincup, and on Lap 32 had little trouble passing Mark Winterbottom.

Within eight laps that 10 second deficit to Courtney had been halved, Courtney responding to the pressure by pitting from the effective lead on Lap 40.

McLaughlin, who now had van Gisbergen right on his boot, responded a lap later. The #97 Holden then made his second stop the next time around, a short fuel fill meaning he re-appeared with a two-second lead over Courtney and McLaughlin.

Between the 52nd and the 62nd lap there wasn't a lot of racing going on, a first Safety Car for debris quickly turning into a second thanks to an all-rookie shunt between James Golding, Todd Hazelwood and Richie Stanaway, and then a third when Tim Blanchard went into the wall at Turn 8.

On Lap 62 a restart finally stuck for longer than two laps, and van Gisbergen was able to stretch his legs. He comfortably eased away from Courtney and McLaughlin, setting up a 1.2s win after managing his pace in the closing laps.

" Thanks so much to the Red Bull Holden Racing Team. The new Commodore is awesome. It was a really tight race with Scott and James, but towards the end we were able to push."

Courtney wound up second, shadowing van Gisbergen and pulling a small gap over McLaughlin during the run to the flag.

"[It's a] great start to the campaign with Walkinshaw Andretti United," he said. "To have Michael [Andretti] and everyone here is fantastic. The car worked well all day, Shane just had a bit on us at the end."

McLaughlin, meanwhile, had his mirrors full of David Reynolds for much of the final 15 laps, the Penske Ford driver doing enough to grab the final spot on the podium.

"Awesome start to our campaign," said the Kiwi. "Congratulations to Shane, he was the class of the field all day. We've got a bit to find overnight. It's all on for tomorrow."

There was a hint of controversy to Reynolds' fourth place; earlier in the race he found himself tangling with Whincup while scrapping over fifth spot, the Erebus driver nudging the Red Bull Holden into a spin. There was an in-race investigation, but the incident was dismissed by the stewards.

The spin meant Whincup finished up down in sixth, sandwiched between the Tickford Fords of Mark Winterbottom and Chaz Mostert.

Will Davison capped off an impressive start to his career in the single-car 23Red outfit with eighth, holding off a hard-charging Craig Lowndes in the closing stages.

Fabian Coulthard endured a torrid start to the new season, ultimately bending his Penske Ford after spending most of the race way out of the Top 10. Running way down in 19th when the race was re-started after the first Safety Car, he clumsily clambered into the back of Richie Stanaway on the first lap back under green.

That shunt relegated Coulthard down to 21st in the standings, while Stanaway's day turned even worse on the very next lap when he was caught up in the tangle with fellow rookies Golding and Hazelwood that led to the second Safety Car of the afternoon.