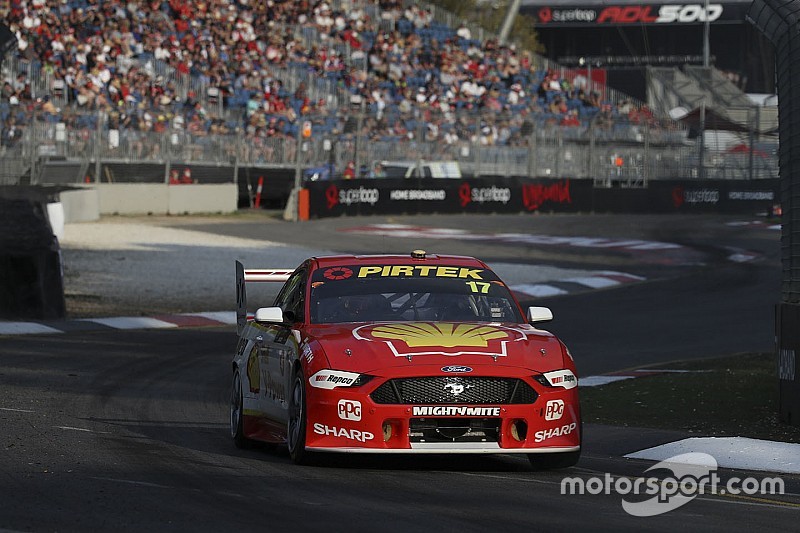 The pair ran at opposite ends of the Top 10 Shootout, McLaughlin last on track thanks to topping regular qualifying earlier today.

The Saturday race winner made it look relatively easy too, his 1m19.662s leaving him with a 0.2s advantage over the field as he secured a first-ever pole at the iconic Adelaide street circuit.

“It’s a big thing to get my first pole here,” he said.

“Shane put a pretty good lap down there and I just knew I had to hit my marks and come away with a good spot.

“He had it on me last year [in Adelaide] and we’re just trying to work together with this new car on my driving.

“Yesterday’s lap was average, so today I needed to do better and it worked out really well.”

Running first, van Gisbergen was the big mover in the Shootout.

He laid down a formidable marker with a 1m19.926s, which ultimately helped him spring from 10th in regular qualifying all the way up to second on the grid.

Fabian Coulthard and David Reynolds will share the second row, each having made a couple of spots compared to regular qualifying.

Cam Waters slipped from third to fifth in the single-lap dash, while Tickford teammate Will Davison made up two spots to slot into sixth.

For the second day running Nick Percat dropped spots in the Shootout, ending up seventh, as Todd Hazelwood ended up a spot better off than he started thanks to costly mistakes from others.

One came from Anton De Pasquale, whose lock-up into Turn 9 cost him a couple of spots compared to qualifying.

Chaz Mostert made an even costlier error, using too much kerb at the first turn and aborting his lap.

As a result he'll start from the outside of the fifth row.