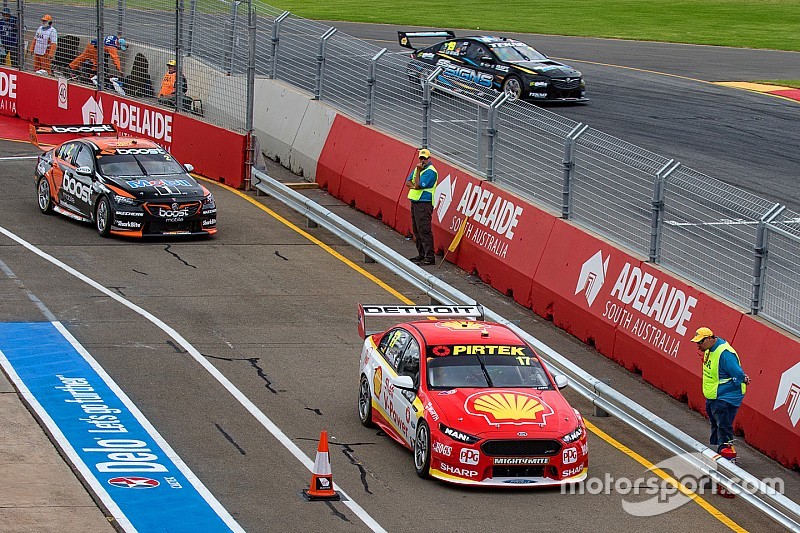 Scott McLaughlin will head into the first qualifying session of the new Supercars season as the pace-setter after topping Practice 2 on the streets of Adelaide.

It was Shane van Gisbergen that spent the majority of the session on top of the times, setting the early benchmark inside the first 10 minutes with a 1m20.386s.

That time proved unbeatable right up until the green tyre runs inside the final five minutes, and even then the only man that could best van Gisbergen's effort was McLaughlin, who grabbed top spot at the flag with a 1m20.356s despite complaining of a lack of grip.

"It's tough work out there," said McLaughlin.

"As the heat's come up on the track it's quite loose. Through Turn 8 it is sketchy.

"It's different; we're just trying to work through that. I'm surprised to be where we were."

Like in the first session van Gisbergen looked to be on for a late improvement of his own, going fastest in the first sector on his final run and setting a personal best in the second sector. However once again he tailed off in the third sector, his early lap ultimately the one that earned him P2.

Brad Jones Racing pair Nick Percat and Tim Slade were third and fourth respectively, both drivers storming to the top with a two-lap stint inside the final 10 minutes.

Chaz Mostert was best of the Tickford Fords in fifth, ahead of Erebus star David Reynolds and fellow Tickford driver Mark Winterbottom.

Fabian Coulthard made his first appearance in the Top 10 with the eighth-quickest time, followed by Garth Tander and Will Davison.

Cam Waters became the first driver to be caught out by the infamous Turn 8 for the weekend, his session coming to an end on the 21-minute mark after he hit the wall on both sides of the track.

It all started with running wide on the way in to the sixth-gear corner, which led to brushing the outside wall and then tearing the right-hand front wheel out with more contact on the inside.

If the car can't be fixed before this afternoon's qualifying session he'll be off the back row for tomorrow's opening race.

"It’s obviously pretty gutting to find the fence at Turn 8 in practice and give the guys a heap of work," he said.

"I didn’t really do much different going in, it just got a bit loose on the entry and it’s just gone in the marbles and stuck me in the fence.

"The hit wasn’t actually that hard but it broke the steering and then I was a passenger. It was the second hit that did all the damage.

"I’m so gutted for everyone. The car was feeling pretty good. Hopefully we’ll get it fixed for qualifying."

Tim Blanchard also ran into trouble during the session, losing his right rear wheel with 15 minutes to go.