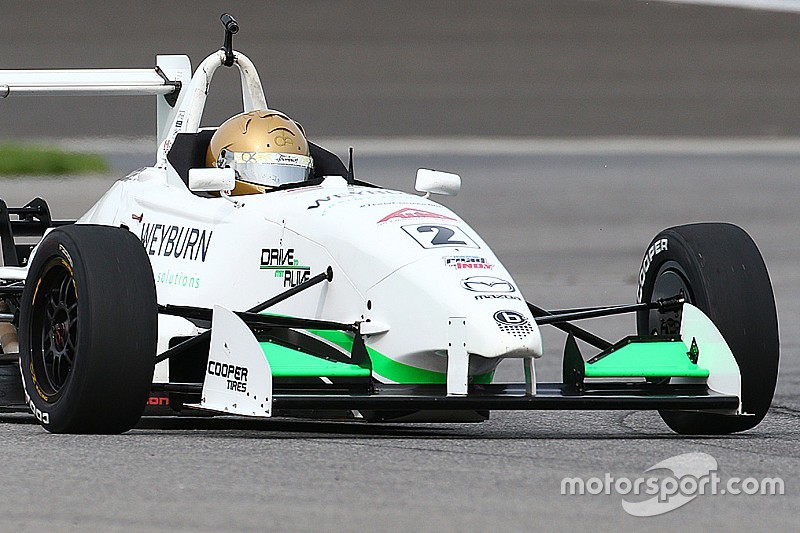 Martin started from pole for the second successive day and retained his position at the start but the event was neutralized almost immediately due to an incident in Turn 1, but not before Franzoni’s ArmsUp Motorsport was shuffled back to fourth at the first corner behind Thompson and Jordan Lloyd (Pabst Racing).

At the restart, Thompson took advantage of a slightly slower exit from Turn 1 by race leader Martin, drafted him down the back straight and passed around the outside at Turn 3 to grab the lead.

Martin maintained pressure on Thompson throughout the 30-minute race, as they traded fastest lap, trying to earn the bonus point, until Lloyd beat them both, just one lap from the finish. Thompson beat Martin to the checkered flag by 0.9sec.

Franzoni maintained his recent strong run by claiming his sixth podium finish from the last seven races. This one didn’t come easy though, as he kept in touch with the leaders for most of the race, then slipped to 4sec behind in the closing stages, instead having to keep an eye on his mirrors for Afterburner Autosport’s Dakota Dickerson, who wound up 1.2sec adrift at the finish.

Robert Megennis put in another steer from the rear, driving his Team Pelfrey car from 12th on the grid to finish fifth, ahead of the third Cape Motorsports car of Nikita Lastochkin.

The winner commented: “Every race I’ve won this year, I had enough of a lead that I could enjoy coming to the checkered flag and winning the race. This race, I had Anthony all over me plus lapped traffic so I was pushing as hard as I could. I had a few big moments on the final lap, so crossing the line was such a relief.

“I have a lead again in the championship but I know how quickly that can change. I went into the last race weekend with a 26-point lead and came out tied, so I know how fast points can come and go. We have five races left so there’s a long way to go. I have to push hard and go for wins.”