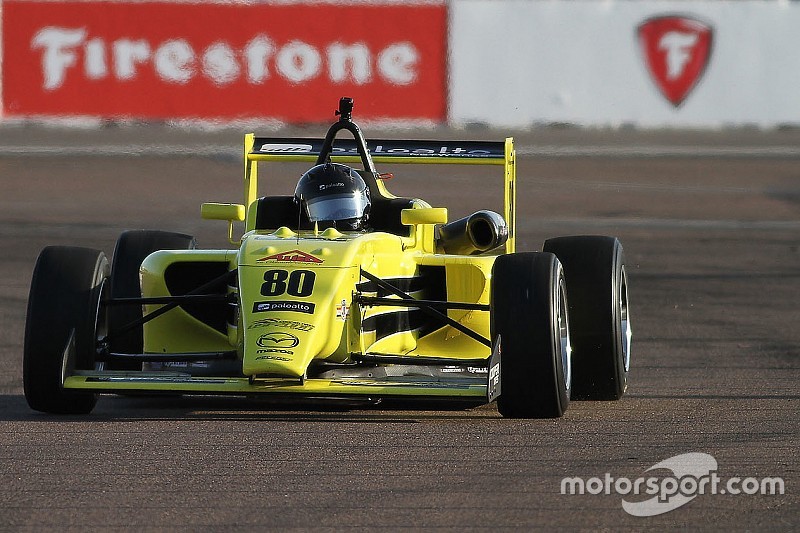 Team Pelfrey’s Robert Megennis took a superbly controlled victory in the first ever race for USF2000’s new Tatuus USF-17, as he held off a charging Oliver Askew to the checkered flag.

Polesitter Megennis, from as early as Lap 2, started to edge away into a race of his own, while behind him Pabst Racing’s Calvin Ming held down second and Dakota Dickerson of Newman Wachs Racing made a strong start to grab third.

However, after pulling out a 3.5-sec lead, Megennis’ race became much less straightforward as Cape Motorsports’ rookie, Oliver Askew, got past Ming. Askew started chipping way at Megennis’ lead and then started carving huge chunks out of it. Even when Megennis laid his (to that point) fastest lap on Lap 15, Askew was almost 0.4sec quicker so that by Lap 16, the gap was 2sec. A lap later, with eight minutes of the race to go, it was down to 1.7. This was going to be close.

Askew was a full half second quicker on Lap 18 as he dipped well into the 1min14s, and on lap 19 the lead was just half a second.

However, once up on Megennis’ tail, Askew went into full stalking mode and discovered Megennis’s defense was even stronger than his pace. As late as the penultimate lap, the Cape car was trying to get around the outside of the Pelfrey machine at Turn 1, but the series sophomore knew exactly where to place his car to stall Askew’s momentum.

What helped Megennis’s cause was that his stalker was himself being stalked. Askew couldn’t make any wild attempts at the lead because he was also watching his mirrors as Rinus VeeKay of Pabst Racing had made an epic and incisive charge from 14th on the grid and appeared to have similar pace to Askew.

At the checkered flag, the trio crossed the line separated by less than 0.7sec, 17-year-old Megennis holding on for his first victory ahead of Askew and VeeKay.

The fight from fourth through 10th was a thriller pretty much from green to checkers. Once passed by VeeKay, both Dickerson and then Ming ran at the front of this train, but both made little errors and lost multiple places, such was the closeness of the battle. In the end it was the second Pelfrey car of Kaylen Frederick which claimed fourth, ahead of a fine series debut by the Exclusive Autosport team, with last year’s championship runner-up Parker Thompson at the wheel.

Dickerson recovered to claim sixth and pull almost three seconds ahead of Ming, who just held on to beat reigning Formula 4 US champion Cameron Das in the second Newman Wachs car, Moises de la Vara in the DEForce Racing entry and Andre Castro, also in a Newman Wachs car.