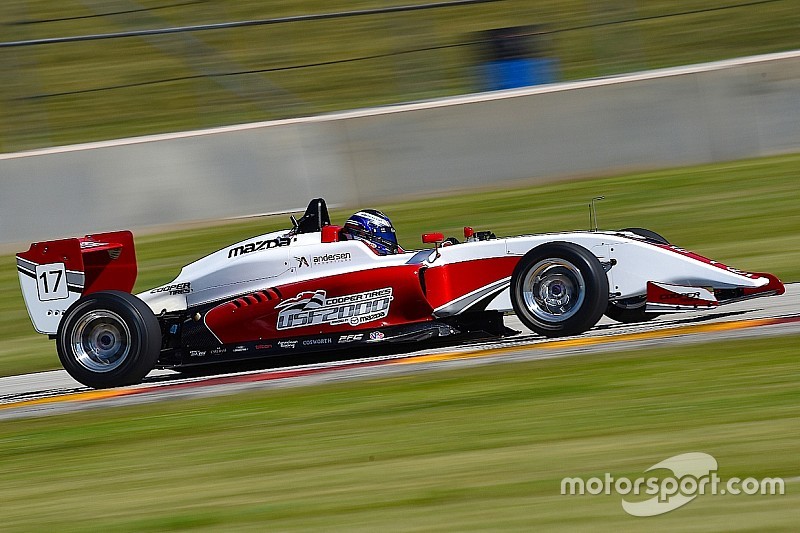 The Tatuus USF-17 development program has completed its road course development, following yesterday’s test at Road America with Joel Miller at the wheel.

Miller, who races for Mazda in IMSA but is also USF2000 steward and driving coach, also tested the Tatuus at Bowling Green, Ky., and Barber Motorsports Park.

He commented: “It’s a great car. We made some setup changes early in the day and did a race simulation run and the car was within a tenth of a second on each lap for the entire run. We even did our quick time on the last lap.

“The car reacted very well to the changes and the teams that were here were able to see the lap times decrease which is what we wanted.”

Comparing the current tube-frame USF2000 car to the carbonfiber Tatuus, Miller said: “The car feels much stiffer, much more connected. You can attack the corner and, while it may move around, it is very catchable rather than just sliding off. It makes its speed in mechanical-grip corners.

“As the fuel bleeds off, the balance changes which is something these drivers will deal with all the way up the ladder – and they’ll learn it now on the first level.”

Miller also praised the principal components of the car, particularly their durability.

“As far as wear and tear and consumables, this car is much more cost effective. The car will stay much more competitive across a long run without degradation.

“The Mazda engine is performing great as are the Cooper tires. We tried different [Performance Friction] brake pad combinations and we are braking at the same rate as the current car but braking later.

“We did 50 laps this morning on the same set of tires. At Barber, we did three straight sets of mock qualifying and a race and the brake pads looked nearly brand new after 600 miles.”

Scot Elkins, project manager and USF2000/Pro Mazda race director commented: “We took care of all the new-car gremlins at the first test and since then things have been going very well.

“It was great to have teams and drivers at the test and to have them finally see the car in action. They have all said the same thing – they can’t believe how much of a car they are getting for the price.

“We are making an effort to reduce operating costs which is what everyone wants.”

A Tatuus USF-17 rolling chassis costs $51,800 and will serve as the base car for the PM-18, the new-for-2018 Pro Mazda car. In PM-18 form, the Tatuus will have more power, a revised underbody and diffuser, a three-element rear wing and a front wing with adjustable composite wing flaps.

The USF-17 will next head to Lucas Oil Raceway at Indianapolis on June 30 for the oval portion of the development program with 2012 USF2000 Matt Brabham at the wheel.

The series reports that to date, orders for 24 USF-17 chassis have been placed among 14 teams – nine of which are new to the series – with the first delivery of 15 cars scheduled in September. Delivery of the second batch of 15 cars is scheduled for December.

An two-day series test is slated for October 8/9 at the Indianapolis Motor Speedway as part of the annual Chris Griffis Memorial Mazda Road to Indy test with a second series open test to be scheduled in January.