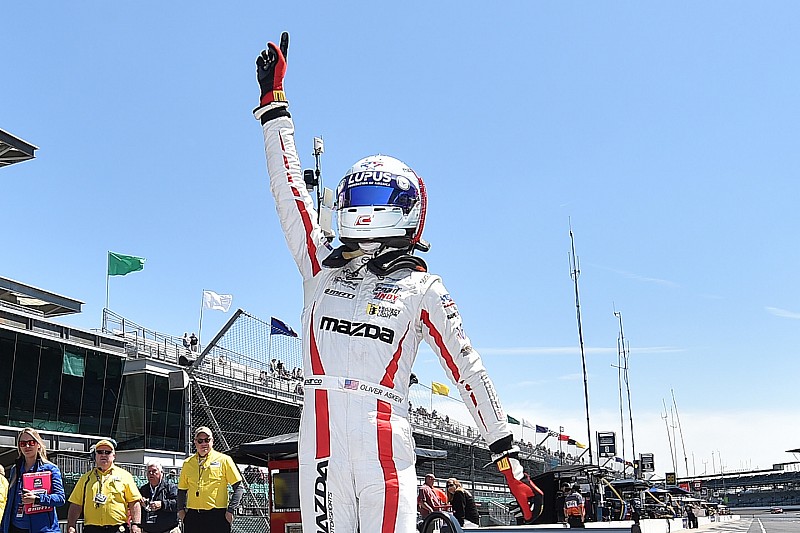 Oliver Askew scored his fifth win in six races around the IMS road course, but the race was enlivened by a strong battle for third and a late yellow that produced a one-lap sprint to the checkers.

Following a full course yellow for a first-lap shunt involving Colin Kaminsky of Kaminsky Racing, and Dev Gore of Exclusive Autosport, Cape Motorsports’ Askew took off at the restart and kept pulling away from the Pabst Racing machine of Rinus VeeKay.

Although the field was brought back under caution on Lap 14 to retrieve Callan O’Keeffe in the Benik machine, Askew again made sure he had the restart under control and pulled 1.2sec over VeeKay on the final lap.

The Dutchman was also unthreatened for second throughout the race, scoring his fifth podium and establishing himself firmly in second on the points table.

However, the battle for third was fraught, with Newman Wachs Racing’s Dakota Dickerson constantly having to watch his mirrors for Team Pelfrey’s Robert Megennis. He appeared to have it under control to the tune of 0.7sec, but that final restart gave Megennis a chance to draft him down the long front straight. The pair went side-by -side through Turn 1, then rubbed and tripped each other through Turn 2, skating through the gravel and losing a huge amount of momentum.

That did the job for Megennis’ Pelfrey teammate Kaylen Frederick, who nipped through to grab third ahead of Parker Thomposon (Exclusive Autosport), Korey Enders of DeForce Racing, and Luke Gabin (Exclusive).