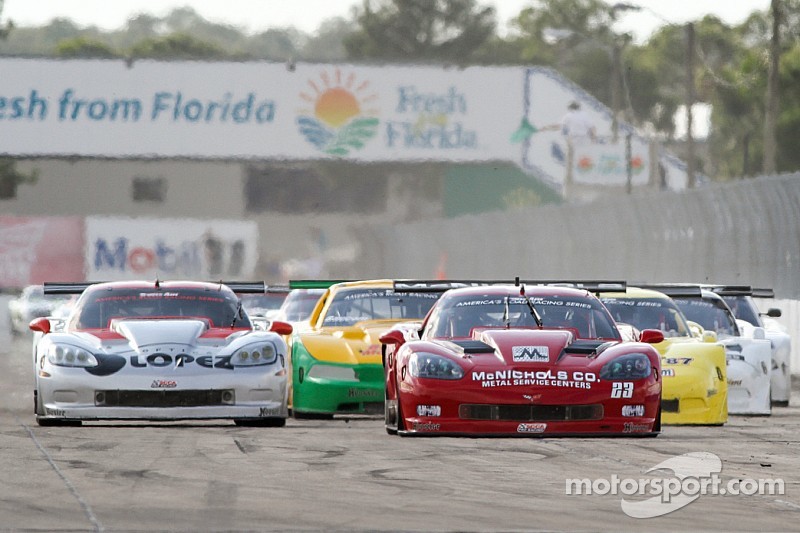 In addition, TA2 drivers are preparing for the first standalone race of the 2015 season where the spotlight will be firmly affixed on the big three in the Trans Am Muscle Car Challenge with Mustangs, Challengers and Camaros battling it out in a 30-car field. The separate race will showcase not only the ever-growing TA2 platform, but the equally expanded level of talent in the TA2 class this year.

Two-time defending Champion Cameron Lawrence, in the No. 1 MOPAR Dodge Challenger, who won the TA2 race at Homestead-Miami last year and is coming off an opening victory at Sebring International Raceway, will be an immediate favorite to emerge victorious once again. But once more he will need to fight through a field of 29 additional cars, including those who joined him on the podium at Sebring during the season opener; Gar Robinson, in the No. 74 Ranch Resort Chevrolet Camaro, and Lawrence Loshak, in the No. 5 Raybestos Powertrain/ Loshak Racing Ford Mustang, who finished second and third respectively.

Ready to the podium at Homestead-Miami

Also, amongst the TA2 entry are plenty of drivers capable of not only landing on the podium, but winning the race outright—all more than ready to stake their own claim on the podium at Homestead-Miami. Tony Ave, in the No. 70 Lamers Motor Racing Ford Mustang, a long-time Trans Am competitor and former two-time TA class Champion, will be competing in only his second TA2 race and will be expected to be a contender throughout the 2015 season. The same goes for Tony Buffomante, in the No. 34 Bestline Superior Lubricants Ford Mustang, who will be entering his fourth Trans Am race and second of the 2015 Season. Buffomante, a road racing veteran, already has a Trans Am victory under his belt from 2013 and will be more than ready to increase his victory tally on the Homestead-Miami road course.

Within the TA class, many eyes will be focused on Miami native RJ Lopez and the No. 16 Optica Lopez Chevrolet Corvette. Lopez’s familiarity with the track at Homestead-Miami was on full display last year as he powered the No. 16 car in a dominant performance capturing his fourth win of his Trans Am career. Now, with his eye on back-to-back victories on his home track, Lopez will once again try to scale the podium, but he will not be without competition for the coveted top spot.

Ruman walked away with the victory and the points lead from Sebring and will now be slated for a rematch with Lopez—who was the only other driver to lead the race during the season opener. Now they, and the other TA competitors, will do battle once more, this time on Lopez’s home track where he may very well have an edge going into this weekend’s race and a chance for redemption from a disappointing Sebring finish.

Joining the TA class in the 3:05 PM race timeslot will be both TA3 class subgroups, the International Group and the American Muscle Group. With 20 cars entered in the production-based class, TA3 is ready for its largest ever Trans Am field with equally as impressive competitors entered, including defending American Muscle Champion and Miami native Ernie Francis, Jr., driver of the No. 98 Breathless Racing Chevrolet Camaro.

As in this year’s Sebring opener, Francis was faced with mechanical misfortune last year at Homestead-Miami after running strong throughout the course of the race. Now he’ll have the opportunity to show the resiliency of a Champion, as he faces a strong American Muscle Group including opener victor Todd Napieralski, driver of the No. 39 Tremec/SKF/Backstreet Performance Chevrolet Camaro; teammate Jason Fichter, driver of the No. 79 Breathless Racing/ Chevrolet Camaro, who finished second at Sebring; and Christopher DeSalvo, in the No. 61 Baucom Motorsports Ford Mustang.

The International Group remains very much a wide-open race with only one podium finisher from Sebring participating in the race at Homestead-Miami— Jerry Greene and the No. 93 Temp Air/ Porsche 996 GT3. Many TA3i drivers will look to match Greene’s Sebring success including Michael Camus, in the No. 08 Epic Motorsports/MCamus Racing BMW M3, another native of Miami who won last year’s race on the Homestead-Miami track and will be ready to rebound after a disappointing Sebring outing.

Joining Camus in a push to return to the podium will be long-time front runner Russ Snow, in the No. 20 Guardian Services, AiM Sports Chevrolet Corvette, as he and Camus both try to push for their first victories and podium appearances on the year.

Trans Am’s TA2 competitors will first take to the track on Friday, April 10 at 9:35 a.m. ET for practice followed by the TA and TA3 classes at 10:05 AM. “Fast Five” Qualifying will follow, beginning at 3:30 p.m. with each class participating in their own session beginning with TA, followed by TA2 and then TA3.