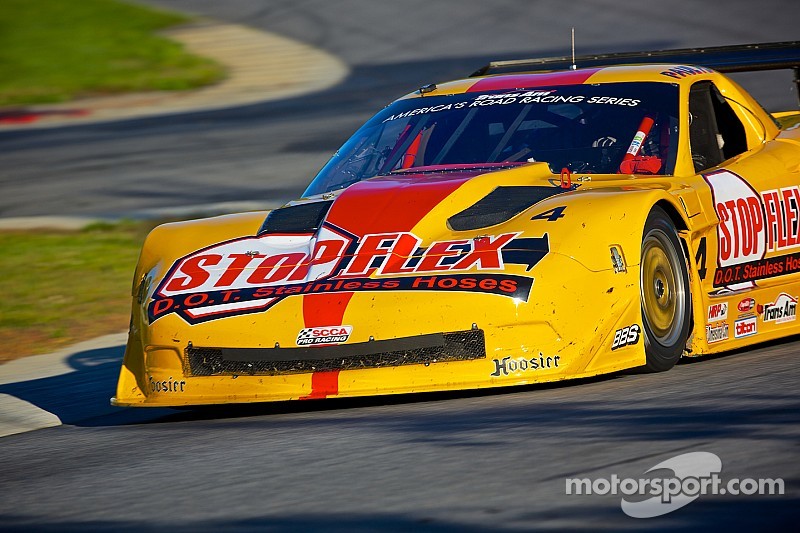 Polesitter has to settle for second.

Paul Fix and the #4 Stopflex/CarCoach/RoyalPurple/Well-Worth Chevrolet Corvette left Road Atlanta with a continuation of achieving podiums results and earning points towards the 2015 Trans Am Series championship. Fix ended the 40 laps of racing standing atop the second spot on the podium next to winner Amy Ruman.

Said Fix,“We ran an almost flawless race and finished a strong second. We had so many family, friends and fans support us in Atlanta, I was happy to bring them home a podium finish.”

As is typical of the Tony Ave Racing effort the crew, driver and car unloaded fast and ready for the undulations that make up the Road Atlanta race track. The dedication and hard work paid off as the number four car set the pace early for the weekend.

“As usual I can always count on Tony Ave and the team to prep a winning car for me,” said Fix. “That was the case at Atlanta where we sat on the pole.”

Throughout the length of 100 miles of racing, driver, car and tires held pace at the front of the running order. With lap times near qualifying speeds, the combination never faded.

“Hoosier supplied us with a brand new road race tire that was absolutely phenomenal throughout the race. I could count on the tires to perform and never fall off,” said Fix.

Fix will get his next opportunity to gain ground in the standings at Lime Rock Park May 23rd for the Next Dimension 100, an event he has won the last two visit to the facility. Currently second in points, just a mere 21 points away from first overall, nine more events on the calendar provide plenty of racing opportunity to leap atop the year end standings.