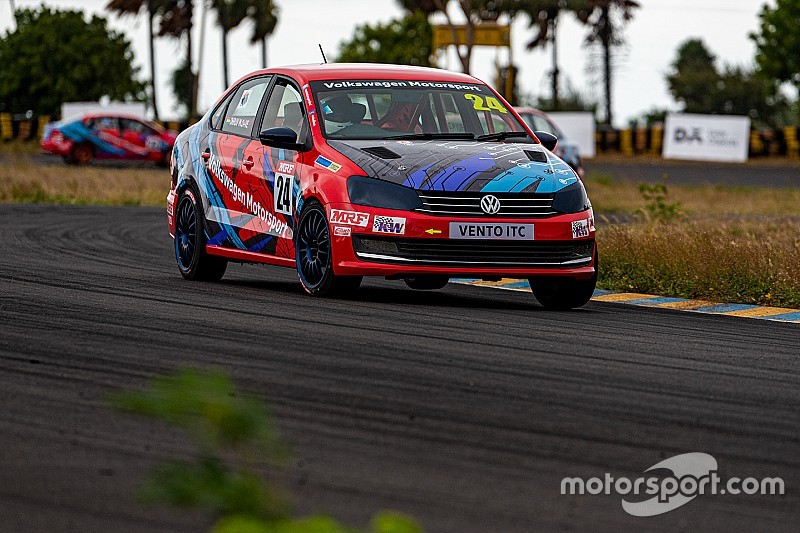 Dhruv Mohite led a 1-2 finish for Volkswagen Motorsport India in the opening round of the 2019 Indian Touring Car Championship (ITC) in Coimbatore.

For the first time in the series’ history TC4-A-spec models were allowed to race in the top class, allowing Volkswagen to compete on equal footing with the privateers with its Vento.

And the Indian arm of the German manufacturer pounced on the opportunity, with reigning Ameo Cup champion Mohite taking a lights-to-flag win at Kari Motor Speedway.

Bala had originally qualified on the front-row but missed a gear at the start, losing positions to both Tharani and Ishaan Dodhiwala, another Volkswagen driver.

While he managed to repass Dodhiwala later in the race, Tharani proved to be too quick to beat - and he settled for third place.

The race marked a monumental victory for Volkswagen and series’ new rules, which have been designed to entice manufacturers and modernise a class handicapped by out-of-production, privateer-run cars.

“This is my first season in the ITC and I am happy to win my debut race,” said Mohite. “I had a good start and after opening up a good lead, I held my position as I had a team-mate (Tharani) behind me rather than a competitor.”

Bala, who for the first time in ITC’s history had to face competition from a manufacturer-backed car, said: “I missed a gear at the start and in the latter half of the race, I didn’t have brakes and I had to use the handbrake.

“With a lot to make up and a good lead over Ishaan, it was pointless to push. My car is still a work in progress and we have to work on a bit to make it more competitive.”

The first round of the ITC series continues on Sunday as part of the MRF MMSC Indian National Car Racing Championship, with a pair of races split across morning and afternoon.