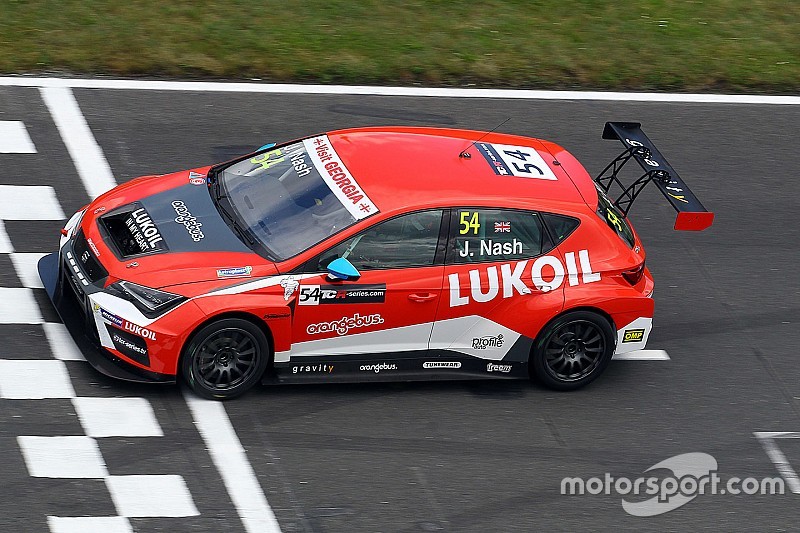 Team Craft-Bamboo Lukoil is leading the TCR International Series once again after a double podium performance at Oschersleben in Germany. Pepe Oriola and James Nash now jointly lead the drivers’ championship after their successful weekend, with Oriola claiming a dominant win in race two. The Spaniard showed strong performance in race one but was forced off the track, resulting in a trip to the pits and an eventual P10 finish.

James Nash combatted his 20 kg of success ballast to score P3 in both races with some brilliant displays of driving. Sergey Afanasyev scored a big haul of points thanks to finishing P4 in both races. The Russian driver was able to retain his P7 spot in the standings while reducing the gap to the leaders to only 34 points. With the trio’s results this weekend, Team Craft-Bamboo Lukoil have continued to extend their lead in the teams’ championship and are now ahead by an incredible 98 points.

All three SEAT Leons made it easily into the second qualifying session with Pepe Oriola taking out the top time in Q1. It was James Nash though who would record the fastest time of the three in Q2, defying his 20kg weight penalty to record a 1:35.177 and secure P3 for race one. Sergey Afanasyev managed P5 with a 1:35.468 and Pepe Oriola finished the session with a 1:35.553 to take P8.

It was a chaotic start at Oschersleben as the grid tried to funnel into the tight first corner. Nash was able to make a good start and gain a position to move into P2 but both Afanasyev and Oriola were caught in the opening fray. Afanasyev slipped down to P10 after contact at turn one and Oriola was forced off the track and into last place. This was only temporary though as both drivers’ began to immediately move back up the field, and by the end of the first lap it was Nash P2, Afanasyev P9 and Oriola P13. The chaos continued with multiple changes throughout the coming laps until a safety car was called out at the end of lap three.

With the field bunched up behind the safety car, it was now Nash P4, Afanasyev P7 and Oriola P9. The race restarted on lap six and Oriola began to make his way up the field, capitalizing and taking P7 away from Afanasyev after the Russian driver was caught in a battle with P6. Nash was busy closing in on the podium and after biding his time was able to take P3 on lap eight with a move up the inside. As the race progressed Oriola and Afanasyev continued their charge and were able to take P6 and P7 respectively by lap 10. They were seemingly unstoppable as they carved their way up the order, capitalizing on their competitors’ mistakes and making some brilliant moves to take further positions.

After a string of great passes, Oriola drove up the inside to snatch P4 when he was hit and spun off the track by Antti Buri, ruining his chance of a possible podium and a good deal of points. Afanasyev was able to make the most of the situation and took an incredible three places to move into P4. The safety car was called out yet again at the start of lap 13 before returning to the pits on lap 15. From here, Afanasyev did his all to catch P3 but was unable to make a move stick before the flag fell.

Nash was looking strong in P2 but with 20kg of success penalty he was finding it hard to defend from the lighter car behind him. He held off for as long as possible but was taken up the inside at turn one of the final lap. Nash drove an incredible race given his ballast and he admirably brought his #54 Seat Leon back in P3, followed by his teammate Afanasyev in P4. The Team Craft-Bamboo Lukoil crew were able to get Oriola’s car back out on track after his incident, which allowed the Spaniard to finish the race in P10 to score the final championship point.

James Nash, Driver #54: “I am happy that I could get back on the podium and start to close in on the championship lead. I need to focus on scoring as many points as I can and that is my aim for race two.”

Pepe Oriola, Driver #74: “Tough race one, especially since I felt I had the pace to continue taking positions. The team did a good job to sort out my car and get me back out on track so I could finish in P10 and take the last championship point. I have a good start position for race two, so let’s see what happens”

Sergey Afanasyev, #77: “It was a good race one for me; I had a lot of good battles from P10 after getting dropped down the order from some contact at the start of the race. The car is feeling good and hopefully I can score some more points in race two.”

The starting positions for race two saw Oriola lined up on the grid in P2, Afanasyev in P5 and Nash a row behind in P7. The second race provided just as much first corner chaos, with Oriola getting nudged by Antti Buri again, which forced the car fully sideways but Oriola managed to correct it to keep his second place starting position. Oriola was determined to make up for his race one finish and on the final corner of lap one, he drove up the inside to take the lead. Nash made the most of his start and was able to grab P4 by the end of the first lap, while Afanasyev slipped into P7.

Over the next lap, there were multiple changes of position but it was Afanasyev who was able to capitalize once again on the battles around him. The Russian driver was able to take P4 by the third lap, with Nash now following in P5. While Oriola was building a large gap at the head of the field, Afanasyev and Nash were having a solid battle amongst themselves, with Nash getting the upper hand to take P4 off the Russian. The positions remained the same for the coming laps as Nash and Afanasyev tried to close the gap on P3. On lap 11, the pair were able to squeeze by at turn one, with Nash taking P3 and Afanasyev P4.

Oriola was untouchable out in front and ran the perfect race to cross the line in P1 after 17 laps at Oschersleben. His teammates had done a superb job of picking their way through the field, with Nash finishing in P3 to take his second podium of the weekend, followed by Afanasyev who would take P4. Oriola now leads the drivers’ championship with 145 points but shares that lead with teammate Nash. Afanasyev retains his P7 spot in the standings but has reduced the gap to only 34 points. Thanks to their results this weekend, Team Craft-Bamboo Lukoil has managed to extend their teams’ championship lead to a huge 98 points.

James Nash, Driver #54: “It was a positive weekend, with two good races, and it's nice to be on equal points in the standings with Pepe, although he has more wins than I do. That's what I need to do, try to win more often, but today, given the conditions, I really went for the points, trying to avoid overdoing and making mistakes."

Pepe Oriola, Driver #74: “After a very bad weekend at Salzburgring because of technical problems, it is nice to be spared from bad luck. I avoided trouble at the start and passed Kajaia at the end of lap 1. Then everything went fine and I focused mostly on saving my tyres in the closing laps. It's nice to be back in the lead of the standings, although the title race is still very long. I'm on equal points with James, he is very consistent and being both in the same team, we share all the data, so it's going to be a close fight, and I am sure that Morbidelli and Comini will also be part of it."

Sergey Afanasyev, Driver #77: “Another good race and some more points for my championship. The car had some good pace and I was able to fight at the front with James. We didn’t want to risk anything for each other and kept the battle nice and clean between teammates. I can’t wait to go to my home race in Sochi next month. Bring it on.”

“We didn’t think this circuit would suit us and it is fantastic to see the team manage a weekend of good results. To be leading the drivers’ championship once again with Pepe and James is a great step forward after a couple of tough weekends. We will be looking to continue this form when we get to Lukoil’s home race at Sochi at the start of July.”