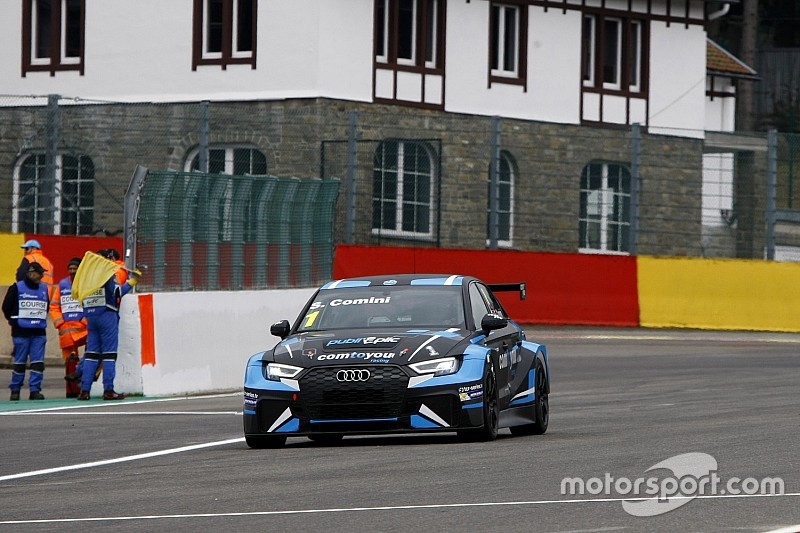 Vernay stretches his leading margin in the standings

Reigning champion Stefano Comini claimed his first win of the season this afternoon in Race 1 at Spa, in a newsworthy success as it also meant the maiden win in the TCR International Series for both the Audi RS3 LMS and Belgium’s Comtoyou Racing.

Comini, who started from pole, dominated the race after re-taking the lead in lap 2 from Attila Tassi, who took a stunning start. The young M1RA Honda Civic driver shone again in the final laps, defending from a charging Jean-Karl Vernay (Leopard Racing Volkswagen Golf). The Hungarian was rewarded with the third position on the podium, behind another young gun, Benjamin Lessennes, who finished a brilliant second in the Boutsen Ginion Honda Civic.

The battle for fifth was intense and thrilling as a long queue of cars was trailing the other Comtoyou Audi of Frédéric Vervisch. The Belgian managed to keep everybody at bay, finishing ahead of Rob Huff, Edouard Mondron, Tom Coronel, Pepe Oriola and Pierre-Yves Corthals.

Vernay stretched his leading margin in the points standings to 15, while Comini climbed to second on equal points with Tassi and Dušan Borković.

Grid – Kajaia starts from the last position because of an engine change after the Bahrain event; Paulsen starts from the pit lane
Start – Comini is not super-fast and Vernay dives in-between the two Audi cars, but it is Tassi who pips everybody on the outside line and takes the lead; Colciago spins at La Source; behind Tassi, Lessennes is second, followed by Comini, Vervisch, Vernay, Huff and E. Mondron
Lap 1 – Comini passes Lessennes for second at Les Combes; Homola and Potty make contact and the Opel driver pits with a broken wheel; Comini attacks Tassi but the young Hungarian resists well.
Lap 2 – Coronel passes Oriola for seventh and attacks E. Mondron; Comini manages to take the lead from Tassi at turn 3
Lap 3 – Comini pulls away and Lessennes passes Tassi for second; Ficza passes Morbidelli for 11th at the chicane
Lap 4 – Vervisch (4th) is under very strong pressure from Verney and Huff, which allows E. Mondron and Coronel to join the fight
Lap 5 – Vernay passes Vervisch at La Source but the Belgian retakes the position at Eau Rouge; they continue fighting and the Frenchman passes the Belgian again at Blanchimont; E. Mondron hits Coronel, who goes off-track but rejoins; Ficza takes 10th from Nash
Lap 6 – In the fight for 5th, Vervisch is chased by a group of ten cars
Lap 7 – Vernay is behind Tassi and attacks his third place; Vervisch gets a warning for track limits; Ficza drops to 13th after going wide after La Source; Corthals takes 11th from Morbidelli
Lap 8 – Corthals passes Nash for 10th
Lap 9 – Comini wins from Lessennes; Tassi manages to save the third place beating Vernay by three tanths; Vervisch, Huff, E. Mondron, Coronel, Oriola and Corthals fill the other points positions.

Quotes from the Race 1 podium finishers

Stefano Comini (winner): “It’s fantastic to win here and to give the Audi RS3 and Comtoyou their first pole and their first win on such a great track and in the team’s home country. I am really very, very happy. I adore Spa, as everybody knows, and the car today was simply perfect. I really want to thank Jean-Michel Baert, from Comtoyu, he saved my 2017 season, and it’s nice to able to thank him this way, and also my engineer Corrado Àvila, who is doing a fantastic job.”

Benjamin Lessennes (second): “It was a great result for me and the Boutsen Ginion Racing team. At the start I was able to dive inside Comini at La Source, but Tassi overtook all of us on the outside. Then I tried to overtake him at Les Combes, but it did not work. After Comini overtook me, I finally managed to pass Tassi, but the Audi was too fast today and I couldn’t catch up. I am confident for tomorrow’s Race 2, because my car is very good in the second part of the race and I think we can aim for a fourth or a third place.”

Attila Tassi (third): “I think I can be happy and proud of my race today. I took a very good start and could lead for one lap and a half, but the Audi had much more top speed and it was impossible to resist to Stefano. Later, I was under pressure from Vernay, but I could resist up to the end. I think it was a nice fight, very clean and I hope everybody enjoyed the show. I worked a lot during the winter, on simulator but also following the “Fit for race” training program put in place by Norbert Michelisz, which was very helpful for improving reactions, stress management, car control and this kind of things. I think it meant a real progress for me…”