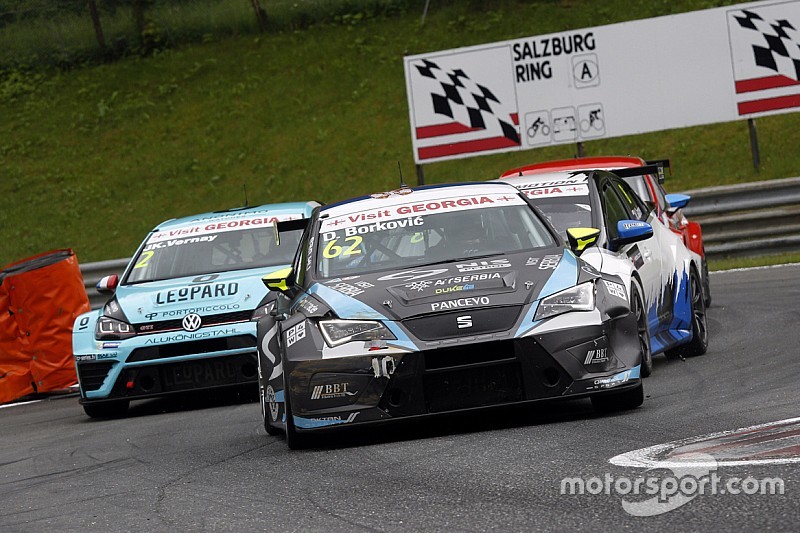 B3 Racing Team claimed a great result in today’s Qualifying at Oschersleben, placing two of his SEAT cars on the front row of the grid for tomorrow’s Race 1.

With a somehow unexpected performance that even surprised himself, Dušan Borković won his second pole position of the season and beat his teammate Mat’o Homola by a bit more than two tenths.

James Nash of Craft-Bamboo Lukoil qualified in third position, benefiting from the penalty imposed to Jean-Karl Vernay who had his fastest time disallowed for a track-limit infringement. Similar penalties also affected the results of Gianni Morbidelli, Sergey Afanasyev and Petr Fulín. This promoted Antti Buri to a brilliant fourth position ahead of Afanasyev.

It was a triumphant result for the SEAT cars that filled the first five places, with Morbidelli’s Honda and Vernay’s Volkswagen in sixth and seventh.

David Kajaia and Stefano Comini qualified in tenth and ninth respectively and will be on the front row of the top-ten reversed grid for Race 2.

The first race will start this tomorrow at 12:35 local time, over a distance of 15 laps.

Q1: Oriola is the fastest by far

The drivers were cautious in the early stages, as the track was still drying after a drizzle that had disturbed the TCR Germany first race.

Oriola was able to go even faster and demoted Homola to second.

Petr Fulín provided the last thrill by moving up from 13th to ninth on his last lap, kicking Mikhail Grachev out of the top-twelve in the process.

Dušan Borković set pole position in Q2, nearly matching the Oriola’s record lap from Q1. After being the fastest by far in the first part of the Qualifying, the Spaniard was not able to repeat the performance and finished a disappointing eight.

Homola qualified second (1:35.131), two tenths behind his teammate and beat Vernay’s 1:35.138 by only seven thousandths of a second. However, the Frenchman had his fastest lap disallowed for trespassing the track limits, which helped James Nash (1:35.177) to inherit the third position.

Drivers’ quotes after the Qualifying session

Dušan Borković (pole position): "I am very happy of this second pole of the season, especially because I was not expecting it. I tend not to like slow tracks and slow corners, so I was not thinking to be on pole here. I didn't push very hard and maybe that was the key. Of course, to have two of our cars on the front row is a great reward for the entire team, who has had a lot of work so far this season. Tomorrow, the first laps will be difficult, because it's hard to warm up the tyres on this track, but I really hope I'll be able to correct my reputation of ‘qualifying master but race disaster'!"

Mat'o Homola (second): "For sure, it's an excellent result for the entire team, and we see that we become better and better at every outing. I'm not very fond either of slow corners, but I tend to do well on this kind of tracks, so it would be nice if tomorrow Dušan and I can win both races. After a collection of finishes between second and fifth, I'd really like to clinch a race win."

James Nash (third): "I have good memories of Oschersleben, where I got some good results in the past and my first podium in Europe. It is a very special track and I think it is important not to over-drive, because you get severely penalized. That's what I tried to do and it paid off, although the gap with the pole, three tenths, seems relatively huge. Half of it, though, I think it is because of the 20 kg success ballast, which on a slow track always plays a greater effect."

Pepe Oriola (eighth): “In Q2 I couldn't be as competitive as in Q1, and there was no special reason for that. I think I simply pushed too hard and overdrove a bit, and this does not pay off on this track. By breaking later in the slower corners, you end up losing time..."

Cerruti deprived of Alfa's progress by a pedal issue

The Alfa Romeo Giulietta was one of the stars of today's free practice and qualifying sessions at Oschersleben. The car of Petr Fulin was fourth fastest in free practice 1 and then made it easily to Q2, proving the significant progress made both in terms of performance and reliability by the car developed by Romeo Ferraris.

"It is nice and rewarding to see that all our work is paying off," commented Michela Cerruti, the driver that has been developing the car since the start of the project, "We are now much closer to the front-runners in terms of performance and have improved much in reliability. We still have a number of things to improve, in electronics for instance, but we are definitely on the right course."

Unfortunately, the Italian driver could not exploit to the fullest the potential of her car. "An issue with the pedals has arisen in Michela's car," explained Mulsanne Racing team principal Claudio Bortoletto. "It is a mechanical problem that was hindering her driving, but unfortunately it is a relatively complex repair that we cannot perform out of the factory."

Dominik Fugel inherited his maiden victory in the TCR Germany after a 30-second time penalty was imposed to Josh Files who had crossed the line first with a big gap.

Files was penalised for a starting grid infringement, just like his Target Competition teammate Jürgen Schmarl, Antti Buri and Mike Beckhusen (who had finished 3rd, 9th and 13th respectively).

The race was eventful, with an incident at Turn 1 after the start that involved Kirsch, Tim Zimmermann, Kai Jordan and Beckhusen. Files took the lead from Mario Dablander, while Fugel, Harald Proczyk, Schmarl and Ronny Jost were fighting for third.

On lap 7 Dablander had to pay a drive through because his car was not in the correct position on the starting grid. The Swiss dropped from second to 18th and decided to retire.

A shower disturbed the second part of the race, but this did not slowed down Files and Fugel who finished first and second, with Schmarl in third place.

However, shortly after the end of the race the Stewards issued the penalties for Files and Schmarl, which promoted Fugel, Halder and Kirsch to the top three positions.

The second race will start tomorrow at 11:45.

Team Craft-Bamboo ready to fight for championship lead in Oschersleben