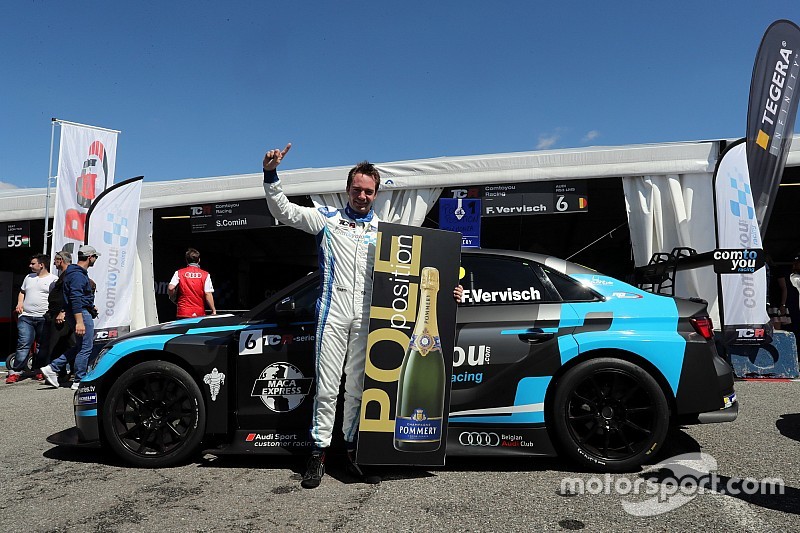 The Belgian driver was impressive throughout the whole session, in his only second Touring Car appearance.

In a very close Qualifying, Frédéric Vervisch took his maiden pole position in the TCR International Series. The Belgian was impressive throughout the whole session, in his only second Touring Car appearance.

It was also the second consecutive pole for Audi and Comtoyou Racing, after the one claimed by Stefano Comini at Spa. Six brands were represented in the top 7, all covered by seven tenths, proving the competitiveness of the field.

The M1RA Honda Civic cars of Roberto Colciago and Attila Tassi dominated most of the two parts of the session, but were eventually beaten by the Audi.

Davit Kajaia was an excellent fourth-fastest with the GE Force Alfa Romeo Giulietta, preceding the DG Sport Compétition Opel Astra of Mat’o Homola, the best of the Lukoil Craft-Bamboo SEAT León cars of Pepe Oriola and the best of the Volkswagen Golf GTI cars, the Leopard Racing Team WRT machine of Jean-Karl Vernay.

Stefano Comini was only 8th, after a difficult session, ahead of James Nash and Hugo Valente. The two Lukoil Craft-Bamboo drivers will fill the front row of the top-ten reverse grid for Race 2.

Qualifying 1: Colciago was fastest at home

The session started under the sun and with perfect conditions. It was immediately a slipstreaming exercise, with the three Lukoil Craft-Bamboo SEAT cars of Oriola (2:01.078), Valente and Nash, leading in that order. Shortly afterwards, it was the DG Sport Compétition Opel Astra cars taking the advantage with Corthals (2:00.946), but Oriola retook the lead (2:00.153) before being beaten by the Honda Civic cars of Tassi (2:00.063) and Colciago (2:00.090). With six minutes to go, Vervisch put his Audi on top (2:00.021). Shortly afterwards, the Hungarian young boys made a hit, with Tassi back on top (1:59.610) ahead of Ferenc Ficza (1:59.895) in the Zele Motorsport SEAT León.

In the dying moments of the session, though, Colciago pipped everybody with a lap of 1:59.601. The Italian beat Tassi, Ficza, Vervisch, Oriola, Vernay, Homola, Kajaia, Valente and Nash. The last two promoted to Q2 were Comini and Jaap van Lagen.

Those who did not make the cut were the two WestCoast VW Golf cars of Morbidelli and Altoè, the GE Force Alfa Romeo of Borković, Corthals, Paulsen, Cappellari and Møller.

What the fastest drivers said after Qualifying

Frédéric Vervisch (1st): “Before the weekend, everybody knew that the Audi had good top speed but you still have to do it, the speed has to be there and Monza is not an easy track. I’m really, really pleased that Audi and the team gave us such a good car and I hope we can have a bit more pace than we had at Spa in the race. We discussed slipstreaming and we tried it yesterday, but it didn’t really work and so we decided not to do it.”

Roberto Colciago (2nd): “Until this morning, I didn’t know if I could even go in the car; I’m surprised I could drive, let alone be P2! I think I have a problem with the discs in my back, which I damaged yesterday going across the kerbs. It started at Spa but I had a massage during the week, which helped. After FP2 yesterday I was really bad and I didn’t sleep much, so I don’t know what will happen in the race.”

Attila Tassi (3rd): “It feels good. We worked a lot during Free Practice yesterday to set up a good car for Qualifying and for the races. Of course, I have a really experienced teammate who is at his home track so that is a big plus for me because he has taught me lots of small things about Monza. In the race, I will try to do the same kind of start I did at Spa and then defend hard.”

Gabriele Tarquini, a spectator with an interest...

Touring Car legend Gabriele Tarquini was a very attentive spectator in the Monza paddock over these two days, and had many hands to shake…

“It’s nice to see so many friends, but I am not here only to socialize, I have come to see the future rivals…” admitted the Italian with a big smile.

“Il ‘Cinghio’ came to Monza from Misano, where he completed another test with Hyundai’s future TCR racer, the New Generation i30.

“The development and testing phase are going on smoothly and positively,” explained the former World Champion and official test driver of the Korean brand.

“I can say it is a well-born car. Things are definitely being done in the proper way. It is still premature to say anything about a race debut, but the time will come for sure!”