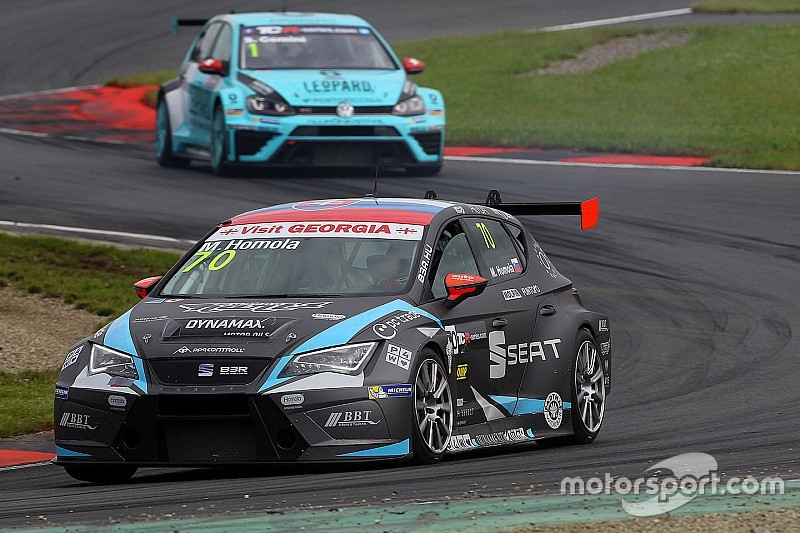 B3 Racing's Mat'o Homola secured his first victory in TCR in an eventful first race at a greasy Oschersleben and also took the lead in the championship.

Dusan Borkovic converted his pole position into a lead at the start but could only hold on to first place for a handful of laps as he slid out of the track and fell back to third.

That allowed Homola to take the lead, fighting back from being passed by James Nash after the start.

The Briton was only fourth when the safety car made its first appearance due to Attila Tassi retiring in the gravel as he was also overtaken by Antti Buri and couldn't pass Borkovic.

Soon after the restart, Borkovic and Nash both passed Buri but the Serbian made another mistake and was only fourth.

It took him a lap to get ahead of Buri again, the Finn coming under pressure from Stefano Comini and Pepe Oriola.

The Spaniard, who had an excursion into the gravel on the opening lap, made an overtake on the Finn but, misjudging his position, he turned into Buri and spun out as a result.

Sergey Afanasyev and Jean-Karl Vernay took advantage of the incident to take fourth and fifth when the safety car was out again.

The final five laps following the restart saw no more drama with Homola making it home in first, followed by Nash, Borkovic and Afanasyev.

Buri stole fifth from Vernay as Gianni Morbidelli fought back from issues after the start to take seventh.