Michelisz and Panis make a Honda double win in Thailand 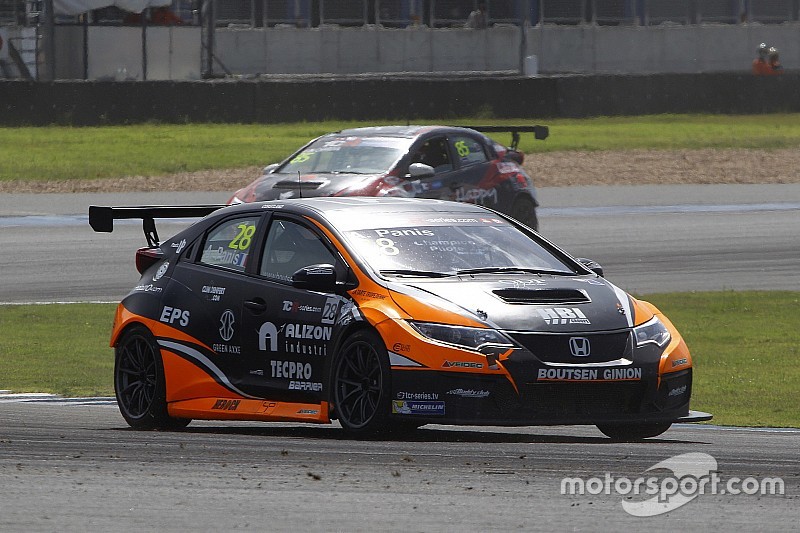 Buriram’s Chang International Circuit had never been successful for the Honda drivers in the two previous visits of the TCR International Series to Thailand. Today the luck of the men at the wheel of the Civic cars changed – and then some!

Not only did Norbert Michelisz (M1RA) and Aurélien Panis (Boutsen Ginion Racing) share race victories, but Michelisz’s teammates Giacomo Altoè and Attila Tassi were both able to finish on the podium and the young Hungarian has jumped back on top of the championship standings as a result.

The first race was one of the liveliest ever, bestowing both honours and tears in almost equal measure. It was a bitter end to the race for Mat’o Homola, DG Sport Compétition and the Opel Motorsport technicians who saw a well deserved first victory vanishing on the last-but-one lap because of a blown tyre. Lukoil Craft-Bamboo, too, had reasons to lament as both James Nash and Pepe Oriola were stopped by technical failures while they were still fighting for the podium positions. Oriola’s withdrawal with a broken gearbox was especially painful, because it sidelined the Spaniard in Race 2 and so greatly compromised his hopes to fight for the title.

While some were weeping, M1RA – with Michelisz and Tassi first and third – and GE Force, with Dušan Borković second after a recovery, were over the moon. However, the Italo-Georgian team has some regrets, because Borković showed a pace that could have resulted in victory without his incident in yesterday’s Q1.

In the second race, Panis took an authoritative lights-to-flag victory, although a part of the credit goes to his crew that managed to solve a throttle issue on the starting grid. Altoè claimed his first TCR International podium on his maiden appearance at the wheel of a M1RA Honda, while Stefano Comini salvaged a third place that helps him to stay in contention for the title, third in the standings and 14 points from the leader.

The TCR International Series will resume in China, at the brand new Zhejiang Circuit, on October 7 and 8.

Mat’o Homola was on the verge of claiming his maiden win at the wheel of the DG Sport Compétition Opel Astra when he was forced to retire with a blown front tyre with only two laps to go. This is the second consecutive race in which the young Slovak has lost a victory in the final moments, after he was passed by Gianni Morbidelli on the last lap of Oschersleben’s Race 2.

As a result, Norbert Michelisz – who was not even expected to race in Thailand – gratefully inherited his first victory in the TCR International Series. The Hungarian ace, called in at the last minute to replace the injured Roberto Colciago, was driving with one eye on the rear view mirror to check how his M1RA Racing teammate Attila Tassi was performing while defending himself from the attacks of Jean-Karl Vernay.

Eventually he found himself the winner with Tassi in third, so claiming two of the podium places for the Honda Civic. Second place went to the Alfa Romeo of an ecstatic Dušan Borković who completed a fantastic recovery from 13th on the grid. An even better performance came from his teammate Davit Kajaia, who recovered from 23rd to 8th.

After being so competitive in previous years here at Buriram, Lukoil Craft-Bamboo suffered setbacks as both James Nash and Pepe Oriola retired while they were fighting for the podium positions.

In only his second appearance in the TCR International Series, Aurélien Panis scored his maiden victory at the wheel of the Honda Civic car run by Boutsen-Ginion Racing.

It was a lights-to-flag victory for the young Frenchman who took the lead at the start and built a small cushion between himself and Giacomo Altoè, who finished second.

It was a result to remember for the Italian teenager as well, after he had switched to a M1RA Honda Civic only on the eve of the Thai event.

Despite losing one place to Altoè at the start, Stefano Comini managed to collect a third place that keeps his chances of winning a third consecutive title well alive.

Attila Tassi finished fourth, ahead of Jean-Karl Vernay in fifth, and this helped the Hungarian to reclaim the lead in the standings, albeit only two points ahead of Vernay.

Actually Tassi’s margin could had been larger without a technical failure that stopped Norbert Michelisz on the last lap which prevented him from finishing fifth ahead of Vernay.

Quotes from the podium finishers in the two races

Norbert Michelisz (1st in Race 1): “I’m absolutely over the moon! Before the weekend, we didn’t really expect to win races to be honest. The Civic is carrying a lot of weight but we did some great work and the team found a good balance. I’m really happy for Attila because he scored the most points and I’m also happy for Giacomo, because I think he can be proud of himself. We knew what we had to do in Qualifying and both races went well. I had luck because Homola suffered a puncture. I could see that he was pushing and so I followed him to increase the pressure, but I could see in the mirror that Attila might need some help so I dropped back. Oriola was too close and so it didn’t work as well as it might, but at the end it is how it is and so I’m happy for the team.”

Aurélien Panis (1st in Race 2): “I knew before the races that our pace was really good, because in Free Practice and Qualifying was really fast but we didn’t get the perfect lap to be in front. P10 and so start Race 2 from pole position was the best possible qualifying result for us. I must say thank you to the team because the car was great to drive. I’m very happy to be in TCR International and to win today. For the young drivers it’s a really good series and it’s great to be fighting with the top drivers like Michelisz, Vernay or Comini. The level is very high and for that reason I’m very happy to win today."

Dušan Borković (2nd in race 1): “I was really disappointed after Qualifying because of what happened. To start from the middle of the grid is always difficult but I had an okay start and I was able to attack. On some circuits the car is good and in others we need to improve it, particularly in slow and medium corners, but the team did a really good job this weekend. The brakes were good in Race 1 and I decided not to change them, but I started locking up in Race 2 and so I had to be careful. Luckily the Alfa is a little bit faster on the straights and so I could keep Nash and Huff behind me. I’m not really focusing on the championship, but I know I’m not far behind Oriola now.”

Giacomo Altoè (2nd in race 2): “It’s unbelievable – I’m so happy. The car was perfect and this was a really good result for me and for the team. I feel really at home with this team and with JAS. After this result, maybe a victory is possible, so I will try the maximum to achieve it. I’m taking things race by race and my priority has to be to help M1RA to win the team’s championship.”

Attila Tassi (3rd in race 1): “This weekend couldn’t have been any better. It all came together in Race 1 and we had a good first lap. I overtook Vernay after the start and went around the outside of Nash at Turn 3. After that, it was tough as I fought with Vernay for 14 laps and had to manage my tyres. Norbi tried to help me once, but Oriola and Vernay were right behind me and it was a big risk. I lost two positions and then Borković came with the Alfa. P1 and P3 for M1RA was really good for the drivers’ and teams’ standings. In Race 2, I had another good start and then Norbi was behind me so it was a bit safer than Race 1. There was a good fight with Comini on the first lap and I always enjoy fighting with him, it was a lot of fun.”

Stefano Comini (3rd in race 2): “This wasn’t exactly what I needed, to be honest. I wanted to leave here leading the championship, but we didn’t have the pace. I ruined the first start and lost many positions. I only wanted to avoid contact to secure the car for Race 2. The second start was a little difficult as it took a bit too long and I was worried about the engine temperature and the clutch. It was a tough race as I wanted to preserve the tyres but it was a good race for me. It’s a bit more complicated now, but it’s still open. We need to work with Audi ahead of China but I’m fairly happy.”

Mat’o Homola places the Opel Astra back on pole