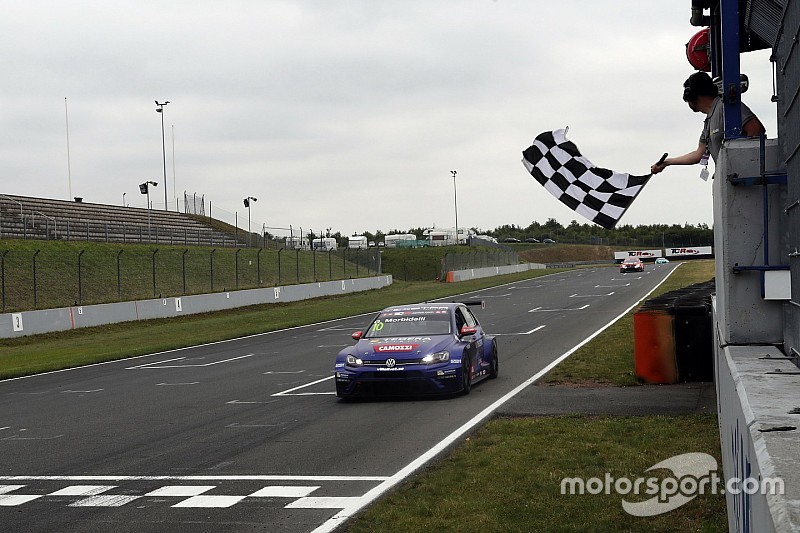 Gianni Morbidelli is back in anger after so many months of disappointment and frustration.
The Italian driver had not been able to win a race since April 2016 at Estoril, but today he reclaimed his place amongst the leading players of the TCR International Series in a very authoritative way.

In fact, he won both races at Oschersleben, scoring the maximum tally of points at stake (55, including 5 for the pole position) and giving WestCoast Racing its first victories since the Swedish team switched to the Volkswagen Golf.

Morbidelli’s win in Race 2 was a real masterpiece, as he overtook Mat’o Homola’s Opel Astra only two hundreds metres from the finish line. No wonder that while he was overjoyed, Homola felt bitter for having lost a great opportunity to score Opel’s maiden win in the series.

The two German races proved to be ill-fated for some of the title contenders. M1RA’s Attila Tassi and Roberto Colciago, first and second in the standings before Oschersleben, left Germany without scoring, while Pepe Oriola pocketed only one miserable point in yesterday’s qualifying.

This all helped Vernay to retake the lead in the overall classification, one point ahead of Tassi; Colciago has slipped to third, with a gap of eight points, while Stefano Comini (sixth and fifth in the two races), is now only one further point adrift in fourth place. Oriola remains fifth, 43 points behind the leader.

The TCR International Series will resume after the summer break at Buriram’s Chang International Circuit, Thailand, on September 2 and 3.

Gianni Morbidelli converted his pole position into an authoritative and long awaited victory for himself and the WestCoast Racing team. The Italian driver made a perfect start and led from lights to flag, even in spite of the safety car intervention after an incident between Tassi and Vernay.

Daniel Lloyd claimed his first podium finish with a brilliant second place, while Rob Huff defended his third position from the assaults of James Nash.

Once again Morbidelli’s young teammate Giacomo Altoè proved consistent in finishing fifth, while Stefano Comini recovered from 17th on the grid to 6th at the chequered flag. A result that might prove crucial in the title fight, considering that none of the top-three drivers in the standings – Tassi, Roberto Colciago and Vernay – scored points.

It was an eventful race, with a number of contacts (that resulted in penalties for Vernay and Oriola), flat tyres and even a black flag to Stian Paulsen for repeatedly infringing the track limits.

Race 2 – Morbidelli encores after a pile up

It was a masterful overtaking manoeuvre that enabled Gianni Morbidelli to score his second race win of the day at Oschersleben. On the last lap and in the last-but-one turn, the Italian dived inside Mat’o Homola’s Opel to strip the young Slovak of his first victory at the wheel of the Astra.

The race was marred by a catastrophic pile-up at the start that involved eight cars and eliminated some of the top guns, such as Roberto Colciago, Pepe Oriola, Rob Huff and James Nash.

After the wrecked cars were removed, the race could finally start and offered a great fight between the first four drivers who were running bumper-to-bumper for the whole 15 laps.

Homola tried everything to keep the Volkswagen Golf cars of Jean-Karl Vernay and Morbidelli behind, although they were clearly faster. Daniel Lloyd stuck to the tail of the leading trio, waiting for a chance to improve his third place.

After Morbidelli passed Vernay for second it was quite clear that Homola’s lead was under serious threat, as the Italian had a much faster pace. Eventually, Homola’s dream of giving Opel its maiden victory in the TCR International Series melted only a few hundreds metres from the chequered flag.
Amongst the survivors were Duncan Ende and Ferenc Ficza; the American finished seventh and scored his first points in the championship, while Ficza was classified tenth (despite a pit stop) and pocketed the first point as a KIA driver.

Driver quotes after the Oschersleben races

Gianni Morbidelli (1st in Race 1 & Race 2): “There couldn’t be a better day than this. I am really happy for the entire team, and also quite proud of myself. It looks like we finally woke up and this gives us tremendous motivation. In Race 1, I had a good start and pushed to build a gap, but I had to do it all over again after the safety-car period. It wasn’t easy but everything went well. In Race 2, I was lucky to escape the big crash at the start. Without it, I certainly couldn’t have repeated the win, but this is motorsport and sometimes you need some luck. The pace of the car was excellent and I could do some nice overtakes on Lloyd and Vernay, always between turn 11 and 12, where I knew I was faster than the others. With Homola it didn’t work the first time, but then, in the very last lap, I succeeded. Now, we can go on holidays satisfied!”

Daniel Lloyd (2nd in Race 1): “It was quite a good weekend for me, I am happy with the pace, as I am getting closer to the top guys. Gianni, though, was really unreachable in Race 1. In Race 2, I was lucky not to be caught up in the big crash, but my pace at the restart was not what we expected.”

Mat’o Homola (2nd in Race 2): “Clearly, I am disappointed to lose a possible first win for Opel only two corners from the end, after controlling the entire race, but Gianni did a great job. We had done most of the job, always pushing and trying to save the tyres, but it wasn’t enough. Still, I think we have to see the positive side: we are making consistent progress and we were not expecting to have such a good pace on a track like this. All in all, we can be satisfied.”

Rob Huff (3rd in Race 1): “I had a very good start in Race 1, but after 2-3 laps, it was clear to me that I didn’t have the pace to stay with the guys in front, so I focused in taking no risks, not ruin the tyres on the kerbs and control the SEAT cars behind me. In Race 2, I thought I was almost through the turmoil, after going left and right, right and left and almost stop to avoid the cars going in all directions. I was almost clear when I was hit quite violently from the back, and that was it.”

Jean-Karl Vernay (3rd in Race 2): “To be leading the points standings after a weekend like this is almost incredible and makes me very happy. Especially after Race 1 in which I got no points. Race 2 was eventful as well. I was sandwiched at the start between Colciago and Oriola, there was nothing I could do. When the race restarted, I tried to resist to Gianni, but he was faster than me and had also to defend myself from Lloyd. I felt I was a little bit quicker than Homola but not enough to pass him for second.”

TCR gets approval to launch UK series in 2018