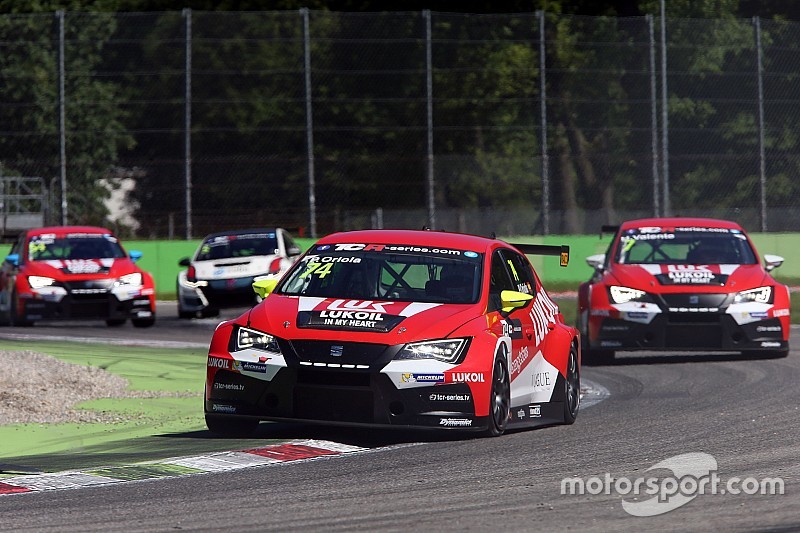 Pepe Oriola, moving from P6 to P3 on race one, claimed his second podium of the year

Lukoil Craft-Bamboo Racing finished round four of the TCR International Series with a race one podium and a good haul of points for their trio of drivers. Pepe Oriola took the honours in race one, moving from P6 to P3 to claim his second podium of the year.

Hugo Valente fought hard for a good points finish to claim sixth, while James Nash just dropped out of the points after some intense battles with the competition to take P12. Unfortunately, at the start of race two, Valente was forced to retire after contact, resulting in a tough finish to the Frenchman’s weekend given his P1 starting position.

Nash was a front runner throughout the second race after starting on the front row, but he did not have the speed to match the other cars, just slipping out of a podium position in the final laps to take P4.

Oriola struggled to find the pace he had on Saturday but displayed some stellar defensive driving to collect some points in P8. Oriola now sits in P5 in the championship standings with 66 points, followed by Nash in P9 with 50 points and Valente in P10 with 46 points.

Lukoil Craft-Bamboo Racing will now head to the Salzburgring in Austria for round five, where they hope to build on the podium success they found in Italy.

After a chaotic dive into the first corner, the Lukoil Craft-Bamboo Racing boys made it out relatively unscathed, with all three managing to gain positions by the end of the first lap. Oriola was gaining ground down the straight on the second lap from P5 and made a great move around the outside of the Audi of Frederic Vervisch at turn one to snatch P3. Nash, who was in P7, was able to capitalize on Oriola’s battle ahead of him, claiming two positions to get himself into P5 thanks to some contact between the Audi and the Honda.

As the fourth lap got underway, Nash made his way into turn one but a fast charging Jaap Van Lagen tapped him on the rear and forced him into the run off area, losing him valuable places. Valente was just behind him and ran into similar trouble, making slight contact with Borkovic out of turn one, which ultimately caused him to lose his place at the next chicane thanks to lack of pace. Lap five saw Oriola still running strong in third, with Nash in P6 and Valente in P8 despite some early setbacks. A big battle between Nash and Borkovic began at turn four and five, with the pair jostling for position in true touring car fashion.

During their tussle, Valente was able to overtake around the outside and claim both positions. As the pair headed out of Curve di Lesmo, Nash was hit in the rear by Borkovic, causing damage to his bodywork and dropping him into P8 just behind his teammate Valente, who was now P7. Over the coming laps Nash came under constant attack, which gave him the chance to show some brilliant defensive driving techniques but he couldn’t beat the speed deficit between other cars on the straight and began to slip back.

The #54 driver braved the continued assault but ultimately settled into P12 on lap eight. As the race drew to a close and the chequered flag was waved, Oriola crossed the finish in P3 after having driven a faultless race to secure a step on the podium. Valente was up next and had taken three places to finish the race in P7 and in the points; while his teammate Nash held on to take P12.

It was a front row start for Valente and Nash, taking the P1 and P2 spots on the grid respectively. Nash got the better start off the line and managed to edge ahead of Valente into the first corner to keep P2. Unfortunately, Valente made contact with J.K Vernay at turn one and hopped sideways over a kerb, throwing him into the gravel trap and forcing him down into last place.

Oriola got off to a quick start from P5 and avoided the fray at the first corner to gain a position as he got his race two challenge underway. Valente made it back to the pits but after an assessment by the team it was decided to retire the #7 SEAT Leon from race two. Nash was running in second but was slowly coming under attack with every passing lap, and although he was able to fend off the advances of the quicker cars initially, on the sixth lap he had to finally relinquish and slipped back to P3.

During that time Oriola had been very busy on the defensive, doing everything he could to hang on in P4 but he just didn’t have the pace to fight back on Monza’s long straights. After 11 laps of the famous circuit, Nash had done an immense job to hang on and cross the line in P4, earning him some very valuable points for his championship campaign. Oriola was not far behind and finished the race in P8 to score points for the second time that weekend.

“I think we did the best we could this weekend with the package that we have. We struggle on the high speed circuits, with the Audi having less drag and the Honda having more power for example, so it was a difficult race weekend. We are pleased to have scored points but I think the BoP needs to be more circuit specific, and since we are in the second of three fast circuits, it is really hurting us at the moment. I am hoping that we can come up with something for the Salzburgring.”

“It's another disappointing weekend for us, our pace was just not good enough. Race 1 was alright, I got to gain four positions, it was a bit of a destruction derby race, too many drivers cutting chicanes and hitting each other everywhere.

The second race I missed my start, and there is nobody else to blame but me for that but it's a real shame to have to retire because we could have scored good points. We really need to find some more pace with the car and hopefully have the BoP reviewed.”

“I got another good start in race two, but there was nothing I could do to stop Comini in the Audi. The benefit was that I could use him for a tow, and that worked for a while until Colciago came through in the Honda. While it brought me back closer to them when they were scrapping, it also brought the other cars closer to me, and inevitably Vervisch in the second Audi got past to take the final podium result. Fourth place isn’t really where I or the team wanted to be but, all things considered I think it has to be looked at as a good result. The less said about the wild race one the better.”

“It was a pretty good weekend, really happy with the pace in race one. Unfortunately, I don’t know what happened to the engine in race two, but I was just continually losing places on the straight, so we have to look at the car and the data, because it was really weird to lose the pace after two laps. I also feel that the BoP needs to be addressed for the next round.”