Garth Tander says he was "pissed" after a three-way clash between teammates left both him and wife Leanne with damaged Audis at Phillip Island.

The husband and wife duo clashed during a frantic opening lap during the second TCR Australia race at Phillip Island, their Audis making heavy contact on the way into Turn 4.

The spectacular crash came just moments after Garth had hit the back of Subaru driver Andre Heimgartner, who had slowed to avoid the spinning Renault of James Moffat on the way into Turn 2.

Reflecting on the contact with Leanne, Garth said that it was a hit from Melbourne Performance Centre stablemate Aaron Cameron that kick-started the incident, and that neither of the Tanders were pleased with the outcome.

"I got involved in that thing when 'Moff' went off. It was a classic Turn 2 at Phillip Island type thing," he said.

"I had damage, but it wasn't that bad. And then going down to Turn 4 I got whacked from behind and took both Leanne and myself out. So that was pretty disappointing.

The crash gave the MPC crew plenty to do in the short gap between races, Garth managing to get back out to start from the back of the grid while Leanne started from pitlane.

They finished the finale fourth and ninth respectively, while Cameron took his first TCR Australia podium with third.

"I don't think we'll laugh [about the crash], she's bloody dirty. And rightly so, because the guy who caused all of the damage to us was third in the last race," said Garth.

"But I'm not going to throw the kid under the bus, everyone is struggling on the cold [rear] tyre. It's just unfortunate that our cars were near each other and that happened."

Leanne agreed that her husband was blameless, but did admit to thinking that may not be the case for a brief moment after the contact.

"It wasn't his fault, he tells me," she said. "He said he got a hit, and the guy that hit him admitted he hit Garth, so that's what happened.

"I looked in the mirror as I approached Turn 4, and Garth was half looking to have a go but I braked pretty late and he slotted in behind me, so I knew I was fine.

"I just started to turn in and copped it. I knew he was behind me, so at first I thought 'what the'. But I also thought he wasn't having a go, so I figured someone had hit him.

"Or he was going to be in big trouble.

"It was disappointing. It didn't just ruin Race 2, but Race 3 [as well] because the damage took longer to repair than [the team] thought and I had to start from pitlane." 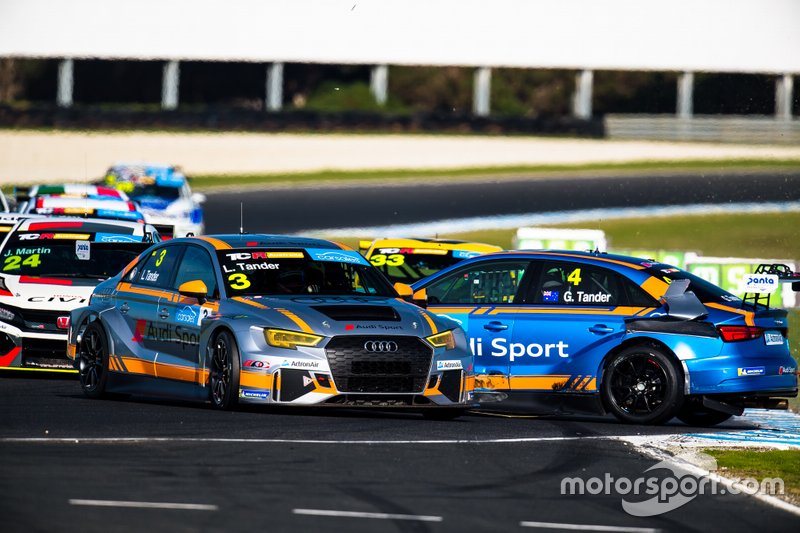