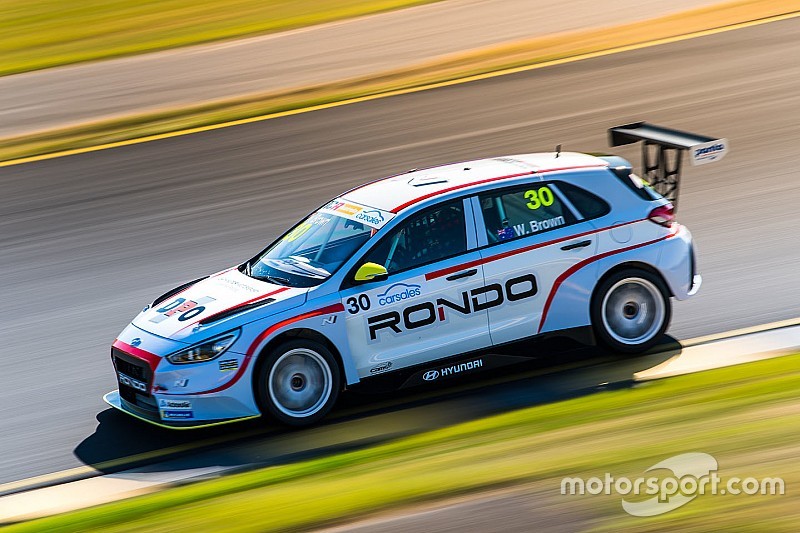 The two Super2 regulars staged an exciting tussle for the lead, HMO Customer Racing driver Brown taking what was ultimately a comfortable 3.1s win after grabbing top spot with three laps to go.

"It was pretty cool, they made me work for it," said Brown. "It was a great battle, an awesome race. I loved every second of it."

It was Honda driver Tony D'Alberto that won the start, beating Race 1 winner Jason Bright off the line to lead through Turn 1.

But his lead was short-lived, O'Keeffe barging past D'Alberto at Turn 2 to take over at the front.

Once in front the Alfa driver looked to make a run for it, pulling almost 2s on the field in the opening four laps.

However that gap eroded just as quickly once Brown got past D'Alberto. By Lap 5 the Hyundai was within a second of the leader, and a lap later right on the Alfa's rear bumper.

The leading pair had pulled more than 2s over D'Alberto in third, however that advantage disappeared when Alexandra Whitley beached her VW at Turn 6, sparking the series' first-ever Safety Car.

When the race restarted on Lap 11 O'Keeffe and Brown quickly gapped D'Alberto again as they resumed the battle for the lead.

That battle only lasted until Lap 13, though, Brown finally sneaking into the lead.

Once in front he was able to pull seven-tenths in half a lap, extending the gap to a healthy 3.1s by the finish.

O'Keeffe slipped back towards the battle for third in those closing laps, but was still able to come home a second clear of D'Alberto.

VW driver Bright was fourth, just four-tenths behind the Honda, while Kelly Racing Subaru star Andre Heimgartner went from 10th on the grid to fifth thanks to an overnight fix for a persistent downshift issue.