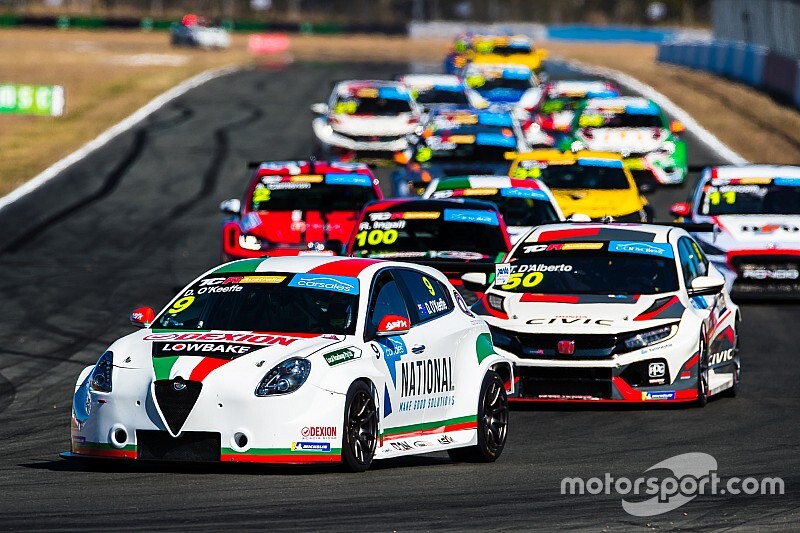 Dylan O'Keeffe made it back-to-back wins with a comfortable Race 3 win at Queensland Raceway.

Much like today's earlier race, it was a clinical lights-to-flag win for the Ash Seward Motorsport Alfa driver.

He controlled the gap back to Russell Ingall throughout the 30 minutes, the title contender banking more points after crossing the line with a 1.2s advantage.

"It's a credit to the boys at ASM," he said. "I just tried to keep my head calm, it's hard with 'The Enforcer" behind you.

"I was just trying to build a gap early, look after the car, and leave something for the finish."

Ingall (Melbourne Performance Centre Audi) made it three podiums from three races with second, while Tony D'Alberto (Wall Honda) finally finished in the top three after a pair of fourths from Races 1 and 2.

Nathan Morcom capped off a consistent day with fourth in his HMO Hyundai, while Aaron Cameron (MPC VW) dropped back to fifth after starting up in third.

John Martin was sixth in his Wall Honda, followed be a heated battle over seventh between Garry Rogers Motorsport Alfa driver Jordan Cox and series leader Will Brown (HMO Hyundai).

Still recovering from his Lap 1 dramas on Saturday, Brown was unable to find a way past Cox and had to settle for eighth.

He still leads the championship, however his lead has been cut from 125 points to 55 points.