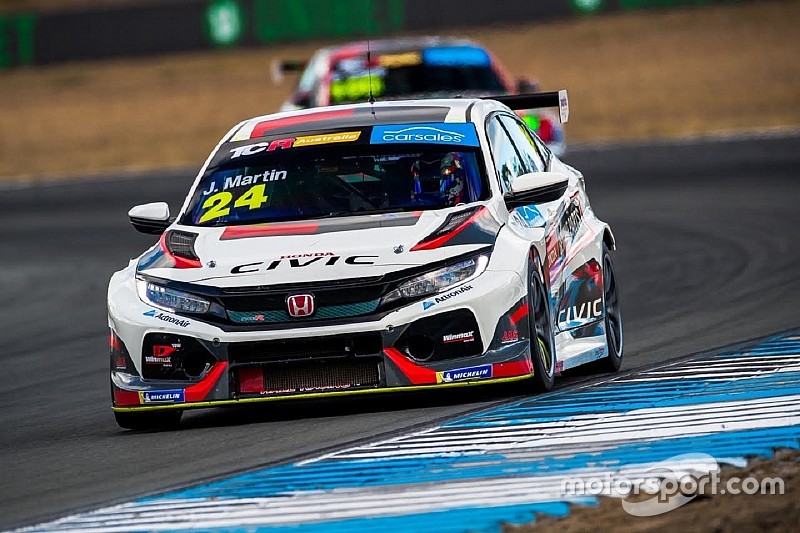 Honda driver John Martin closed out Friday practice as the pacesetter for the fourth TCR Australia round of the season at Queensland Raceway.

Martin found the best part of a second between the two 30-minute sessions. Having been just eighth quickest with a 1m14.825s in the opening hit-out, he improved to a 1m13.920s second time around.

That left him as the only driver to break the 1m14s barrier for the day.

"It’s so loose on the way into the corners. It’s going to be hard to race like that, but we’ll make some changes tomorrow,” said Martin.“It’s early days yet. So far, so good. The bullshit stops tomorrow.”

Dylan O'Keeffe was the most consistent driver of the day, the Ash Seward Motorsport Alfa driver dominating the first session by almost four-tenths with a 1m14.077s.

He went marginally slower in the afternoon session, however was still second quickest thanks to his 1m14.017s.

Jean-Karl Vernay (Melbourne Performance Centre Audi) made an impressive start to his TCR Australia debut, the WTCR regular going third quickest in both sessions despite having never seen the Ipswich venue before.

Jordan Cox celebrated his switch to a Garry Rogers Motorsport Alfa with the fifth quickest time in the second session, while Russell Ingall (MPC Audi) recovered from a high-speed spin in the first session to end the day sixth quickest.

Qualifying and all three races from Queensland Raceway can be streamed live and free from anywhere in the world via Motorsport.tv.