Honda driver Naoki Yamamoto says he had taken extra care to avoid any trouble with lapped traffic at the time of the incident with a GT300 machine that wrecked his and Team Kunimitsu's SUPER GT title hopes.

Yamamoto was looking well on course to defend his 2020 title and score Honda's first ever back-to-back GT500 titles, as he ran in fourth place aboard the #1 NSX-GT he shares with Tadasuke Makino heading into the closing stages of the 66-lap season finale at Fuji Speedway.

But that all changed at the start of lap 51 as Yamamoto was left with nowhere to go when Ren Sato outbraked himself at the wheel of the #55 ARTA Honda NSX GT3 approaching Turn 1, steamed up the inside of Yamamoto and caused a collision that left the #1 machine with serious damage.

The incident handed the championship to the TOM'S Toyota crew of Yuhi Sekiguchi and Sho Tsuboi, who won the race to overturn the considerable 16-point deficit they faced ahead of the Fuji round.

Looking back on the clash, Yamamoto was careful not to criticise Sato too harshly but was keen to point out that he had been especially mindful when passing the ARTA machine and the GT300 title-winning Subaru BRZ of Hideki Yamauchi that Sato had been battling at the time.

"It wasn’t that I hadn’t been careful, I had completely passed [the #55]," Yamamoto told selected media, including Motorsport.com's Japanese edition, post-race. "The team had told me over the radio that the #55 and the Subaru were having an important fight, so I took a margin and used the middle of the track to pass.

"I could have retaken the racing line in the braking zone, but then the Subaru wouldn’t have been able to slow down properly. To take care not to be hit [from behind], and to not interfere with their battle, I made space for them. As a result, I was in the middle of the track and got hit from the inside.

"I haven’t talked to [Sato] directly, so I don’t know the cause, whether it was car problems or human error. In any case, it’s something I couldn’t have expected. As soon as I exited Turn 1 and I couldn’t drive straight, I knew the title was gone."

"I am very sorry for the #1 car and everyone in the team," said the 19-year-old rookie. "I tried to overtake [the Subaru] too aggressively and that's what caused the collision.

"I can't allow myself to do something like that again, so I will focus my mind and study in the off-season to ensure that nothing like this happens ever again." 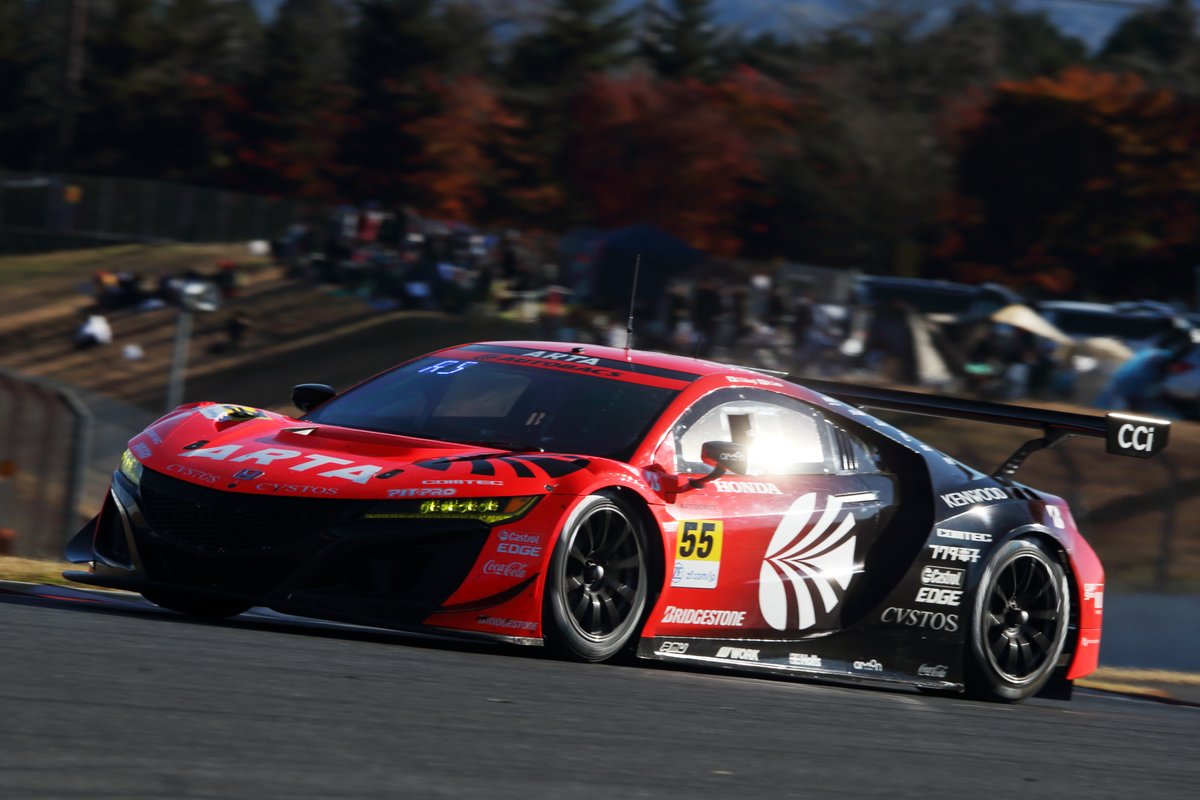 After around 11 minutes spent in the garage Yamamoto returned to the track in the repaired #1 NSX-GT and finally took the chequered flag seven laps down on the winning TOM'S Toyota.

"I said to the team, if it’s possible to fix it, I don’t care how many laps are left, I just want you to let me take the chequered flag," he recalled. "There were many fans supporting me, so my selfish wish was granted and I had the car fixed to go back on track.

"It wasn’t the 100th race [in SUPER GT] I was hoping for, but it was one that I will never forget. You don’t only learn when you win, in fact you learn more things when you lose, so I think it was a chance to make myself stronger.

"But the prize we let get away was a big one, and I feel responsibility for Honda and the team failing to win consecutive championships."

Yamamoto was also keen to praise driving partner Makino for his efforts since returning to the cockpit from illness in the second round of the year, despite not having the chance to defend his 2020 title.

"On the positive side, from somewhere I felt something telling me, ‘win it with Makino’," he said. "Makino knew he could not win the title but never said a word of complaint, and he did his best for me and the team.

"I think we have to look at this result in a positive way and get ourselves back on track. Next year, together with Makino, I want to get the title back for Team Kunimitsu."